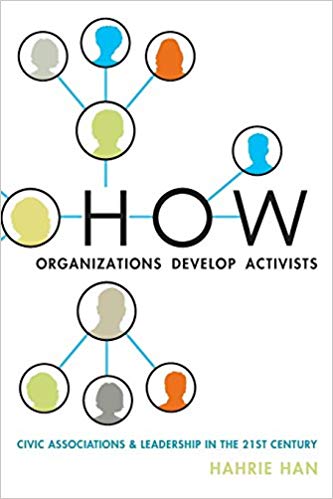 How Organizations Develop Activists is a 2014 book by academic Hahrie Han. Han draws upon her fieldwork studying different civic associations to identify the factors that contribute to high levels of engagement. HODA, as its affectionately known, neatly captures these factors, gives examples, and discusses how to apply them. In all, it’s a concentrated dose of organizing wisdom backed up by rigorous fieldwork.

A key finding of HODA is that high-engagement chapters (which may be organisations, groups, branches or sub-branches) practise both organizing and mobilizing. Han is clear about what these terms mean, which does a service to all of us.

Mobilizing is “transactional”: “strategies intended to activate people already motivated for action.” Mobilizers work with people as they are without attempting to build upon their motivations or capabilities. Typically, mobilizing is about the “quantity”, of action, with mobilizers attempting to meet largely numeric goals such as the number of signatures on a petition, or the number of emails sent to an MP.

While mobilizers invest in membership, organizers invest in members – building “quality” or “depth” by “cultivating people’s motivation, skills, and capacities for further activism and leadership.” Han characterises this strategy as “transformational” as it aims to change members themselves to build future capacity.

Associations focused on transformational organizing are more likely to engage volunteers in work that brings them into contact with each other, gives them some strategic autonomy, and shows them how their work fits into a larger whole.

So what are the factors that Han identifies? Her fieldwork demonstrates that high-engagement sites used organizing to build “depth” which then enabled greater “breadth” through mobilizing. Organizing involved three approaches:

These are invaluable principles for being deliberate about organizing.

Volunteers were encouraged to build relationships with each other.

Relational connection is fundamental to organizing. Han writes that volunteer collaboration gives leaders the chance to “discover and develop … shared commitments”. Such commitments between individuals create a “solidary” motivation to get involved, complementing the “purposive” one that already exists [1]:

Connecting with others and taking action together increases the motivations to volunteer.

Volunteers had a degree of strategic autonomy.

Volunteers should have a say in how they achieve organisational goals. Strategic autonomy is a broad concept and can mean different things. At the least, it means that volunteers get to decide how they pursue the goals set by the organisation. This increases ownership, as volunteers are responsible for decision-making, not just implementation. Too, specifying outcomes but not methods encourages volunteers to use their unique resources (skills, networks, knowledge) towards campaign goals. For this to work, organizers must take responsibility to support volunteers by equipping them to do meaningful work. When volunteers have strategic autonomy and are empowered to exercise it, they are more invested in the campaign, their unique resources are better leveraged, and they develop more rapidly.

Volunteers could see how their work was part of a bigger picture.

If a volunteer can see how the efforts of them or their team contributes to a campaign’s success, their motivation will be greater. This also fosters a sense of community, of working together in unison, something that Han identifies as an intentional pursuit of leaders of high-engagement chapters.

Han argues that organizing associations offer volunteers the chance to work in collaboration, to exercise strategic autonomy, and to see how their work is part of a strategic whole. This builds solidary incentives, strategic capacity, and purposive incentives, increasing engagement and effectiveness.

Organizing in Australia: the Voice for Indi example

For an Australian example of these principles in action, I offer the 2013 campaign that saw Cathy McGowan replace Sophie Mirabella as MP for Indi: Voice 4 Indi. [2]

Voice for Indi (V4i) was a successful grassroots electoral campaign to make the federal electorate of Indi marginal. It used a highly decentralized model of participation which saw an unprecedented level of mobilization and saw the independent candidate Cathy McGowan win the seat of Indi.

V4i promoted relationships between its supporters. The campaign spread its seeds with around fifty ‘kitchen table conversations’ which brought together almost five hundred Indi residents to discuss their vision for the electorate. Most recruitment for these events used personal asks and strong ties, thus leveraging existing relationships to motivate action. The structure of the conversations allowed friends to discover and develop shared commitments about Indi’s future, and to use this as a stepping stone for future work.

Further, V4i provided its supporters with almost unfettered strategic autonomy, much more than is typical. Volunteers had simply to sign a values statement, a compact outlining some basic rules for engagement. Within those loose limits, and in the context of clear campaign goals, anything was on the table. In the words of Ben McGowan, one of the campaign’s key volunteers, “people just felt they had the authority to do whatever they wanted to.”

This strategic freedom created a great sense of ownership of the campaign. Participants considered V4i not a “schmick political operation” but a “folksy”, grassroots expression of their experience. Cathy McGowan gives the anecdote of some campaigners who learned that a local florist wasn’t trading well, so they raised $200 and bought hundreds of flowers from the florist, then took them to old people to brighten their day. This sort of spontaneity and tactical ingenuity is enabled by the unfettering that comes with strategic autonomy. (This principle, as applied by V4i, is similar to ideas discussed as part of ‘directed networks’ and, to a lesser extent, in Rules for Revolutionaries.)

V4i provided its participants with a sense of being part of a larger whole. The campaign’s much-noted use of social media allowed individuals to identify with the campaign despite geographic separation. Offline, V4i organizers worked one-on-one with trainers and volunteers to help cover the whole electorate. Thus, writes Susan Benedyka, a V4i Campaign Organizer, “we were able to spread excitement….right across the electorate.” Participants in V4i felt they were part of a grassroots mobilization working to “take back politics”; their actions thus gained a transcendence and greater significance within the context of the electorate-wide movement.

V4i  illustrates how relational organizing motivates volunteers, the tactical ingenuity that can result from autonomy, and the use of organizational narrative to motivate participants with a sense of being part of a larger whole.

The three principles in HODA are useful guidelines for associations wishing to increase engagement. In addition, Han’s research reveals a handful of more practical behaviours that are common in high-engagement chapters. These are reflective coaching and the use of campaign teams over standing committees.

The high-engagement chapters in this study used training and reflection to cultivate activists and leaders. They provided activists with the technical skills they need to do their work and also the emotional and moral support they needed to make the work meaningful. (page 106)

Both mobilizing and organizing involve coaching. However, while mobilizers focus on the technical, organizers also facilitate reflection and offer emotional support. This reflective element is fundamental and Han considers it key to “develop long-term motivations and capacities.” Reflection allows leaders to learn from their experience by identifying the ingredients of their success or failure. It helps them to make elements of their practice explicit, thus increasing the odds of future success. Reflection is a powerful way of developing leadership.

Campaign teams were better at providing a sense of meaning about the work because activists had a better sense of the big picture and the ways in which the work they were doing fit into it. (page 105)

In Han’s research, both high-engagement and low-engagement groups had standing committees that had an ongoing existence independent of the immediate strategic context. However, high-engagement groups were unique in that they created ad hoc campaigning teams to focus on shorter-term goals and be pro-active about achieving them. Because activists in these teams had a clearer role in terms of their goals and methods, they found their work more meaningful and had a better sense of “the big picture”. In contrast to groups that exist in perpetuity without distinct short-term goals, campaign teams create greater engagement in volunteers.

Organizing for the future

Cultivating, and transforming, people’s motivations and capacities for activism… is not easy. It takes precious time and resources to develop relationships with members, cultivate their motivations, and teach them the skills of democratic citizenship. (page 2)

Yet, Hahrie Han’s How Organizations Develop Activists suggests that civic associations can attain high levels of engagement only when they are willing to combine the lower-cost practice of mobilizing with that of organizing, enabling both depth and breadth. When associations integrate organizing practises – by fostering relational commitment, providing strategic autonomy, and giving a sense of being part of a largely whole – they are more likely to succeed.

[2] This section is derived from campaign literature, my conversations with Ben McGowan, and Cathy McGowan’s speech at “Politics in the Pub”, July 16 2014.