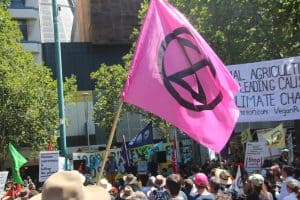 In a 2020 article, which originally appeared in Interface: A journal for and about social movements, Extinction Rebellion member Kyle R Matthews explores how scholarship regarding civil resistance campaigns seeking regime change has been used by environmental activists. Matthews analyses the applicability of research conducted by Chenoweth and Stephan to protest movements in liberal democracies as […]