This article is part of a series that presents the results of the survey. This article focuses on influences on organising model structures; how organisations structure their organising work (particularly subgroups); the strengths and challenges of different subgroups; reviewing and managing organising structures; and how these models can be strengthened to build organising power in the future.

The survey was open to organisations operating in Australia and/or Aotearoa New Zealand who undertake some form of organising. We define organising broadly: gathering people together to take collective action (when a number of people work together to achieve a shared or common goal, whether online or offline). Twenty four organisations responded to the survey, of which twenty employed paid staff to manage their organising program.

You can read more about the survey responses in other articles in this series. The Shape of Organising Models includes charts depicting the organising models of several survey respondents.

Accessibility Note: This article contains some graphs and diagrams which may not be read by screen-readers. Please contact us if you need the information in a different format.

How Long Organisations Have Been Organising

Of the twenty four organisations that responded to the survey:

Respondents were asked to name any examples, frameworks or training programs that informed their organising models. The most commonly mentioned frameworks were described as Ganz (Marshall Ganz), snowflake model (structure of organising often attributed to Ganz), and Momentum. Strike Circles, an approach used by the Sunrise Movement (based on Momentum organizing principles) was also influential. ‘Other’ influences were named as Saddleback (see Purpose Driven Campaigning), Directed Network (see the NetChange collection), Circles of Commitment, and Learning Style (for example the Learning Zone model).

Respondents also provided a large number of organisations, training programs, campaigns and thinkers who have influenced them:

In addition to these influences a number of respondents mentioned how they try to bring in new and diverse perspectives into their organising models. This reflected an increasing awareness of the desire to decolonise organising and bring intersectional and justice approaches to both place based and member led activities. One organisation specifically work with feminist participatory action researchers to advance this goal, while another noted their educational work sharing approaches in their mobilised community:

We have organised events both in person and online trying to connect people up with Australia’s history of NVDA and community organising. First Nations issues, unionism, pacifism, anti bases, feminism, queer activism–you name it, we have tried to build people’s sense of activist history and inspiration.

Use of Subgroups in Organising Model Structures

Across the organisations there was a very strong prevalence for ‘local groups’; groups which operate in a particular electorate or geographic area. Of the 22 respondents, 18 of them noted that they have some form of this type of local group. However, while this was a predominant structure, all of these organisations also had other types of groups within their model. The most common of these were groups with a particular skill set, such as a ‘digital team’ or an ‘artivism collective’. 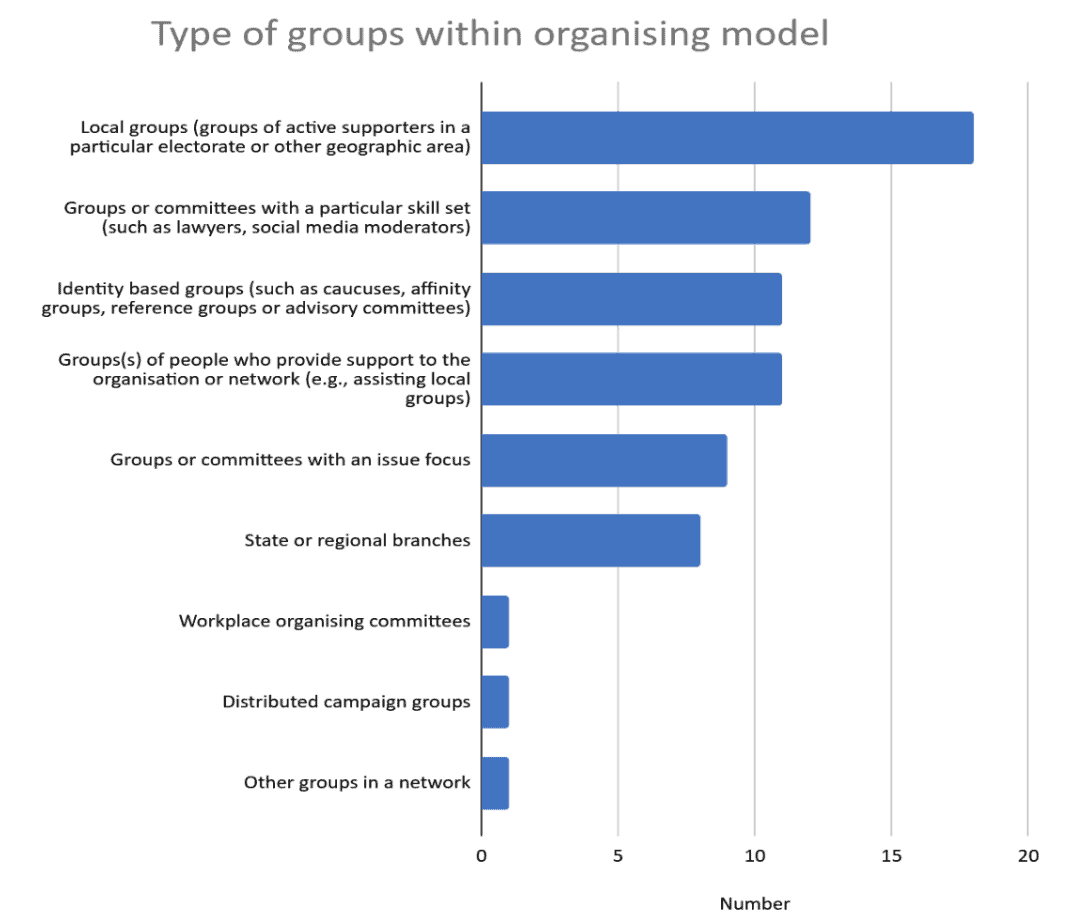 What are the Benefits of Different Types of Subgroups?

Many organisations highlighted the benefits of structuring their model around localised groups. Groups in local communities can attract activists with similar interests and concerns, as well as link in to established networks within communities. Organisations using this approach also noted that it enabled group members to see tangible changes within their own community, thus motivating them to continue their efforts.

Our organising model is focussed around campaign participation and building networks through common issues. I think this is good because we attract people who are interested in taking action now, and participation has a goal and target outcomes. We focus on tangible changes that people will be able to see in their community.

Incorporating groups of different types within a single organisation model could deliver a range of benefits. One organisation focused on supporting activists to join issue-specific working groups, which then enabled them to network with other organisations working on similar issues. Through this model they could both offer opportunities for volunteers to get involved, while also maximising the network connections these volunteers already had, and could further develop.

Another very large organisation focuses on matching volunteers to specific roles that align with their skills and interests, rather than mobilising people into local areas. This organisation has the capacity to support highly skilled volunteers but not geographically disparate local groups.

What are the Challenges Associated with Different Types of Subgroups?

Every type of subgroup brought its own unique set of challenges. Prioritising geographically defined groups also generated challenges. Groups seeking to support geographically diverse local groups struggled with recruitment, losing connections with their volunteers, high dropout rates and balancing support for activists with designing and implementing campaigns. The tyranny of distance, where paid organisers were many hundreds or thousands of kilometres away from their volunteers, hindered regular contact and reduced the one-on-one support they could give.

Our movement grows to a higher number of brand new volunteers than our existing organisers and coaches have capacity to support. We are able to give away the strategy and set them up to run it, but aren’t able to support them to build their skills and teams at the level we would like.

Another challenge mentioned by a large organisation with many years of organising experience was the sudden shift in priorities necessitated by the results of the 2019 federal election. This was particularly the case for organisations who had initially focused on organising within marginal electorates and found that this ‘parachuting in’ approach resulted in difficulties finding local volunteer leaders and difficulties in sustaining groups past election dates. Organisations which had focused on this approach noted a new trend towards organising that prioritised local community needs and interests. This shifted their group structures away from marginal electorates towards geographic boundaries defined by other factors:

As the survey results demonstrate, there are both benefits and challenges in every type of organising model structure. The following table summarises the many insights provided by respondents. 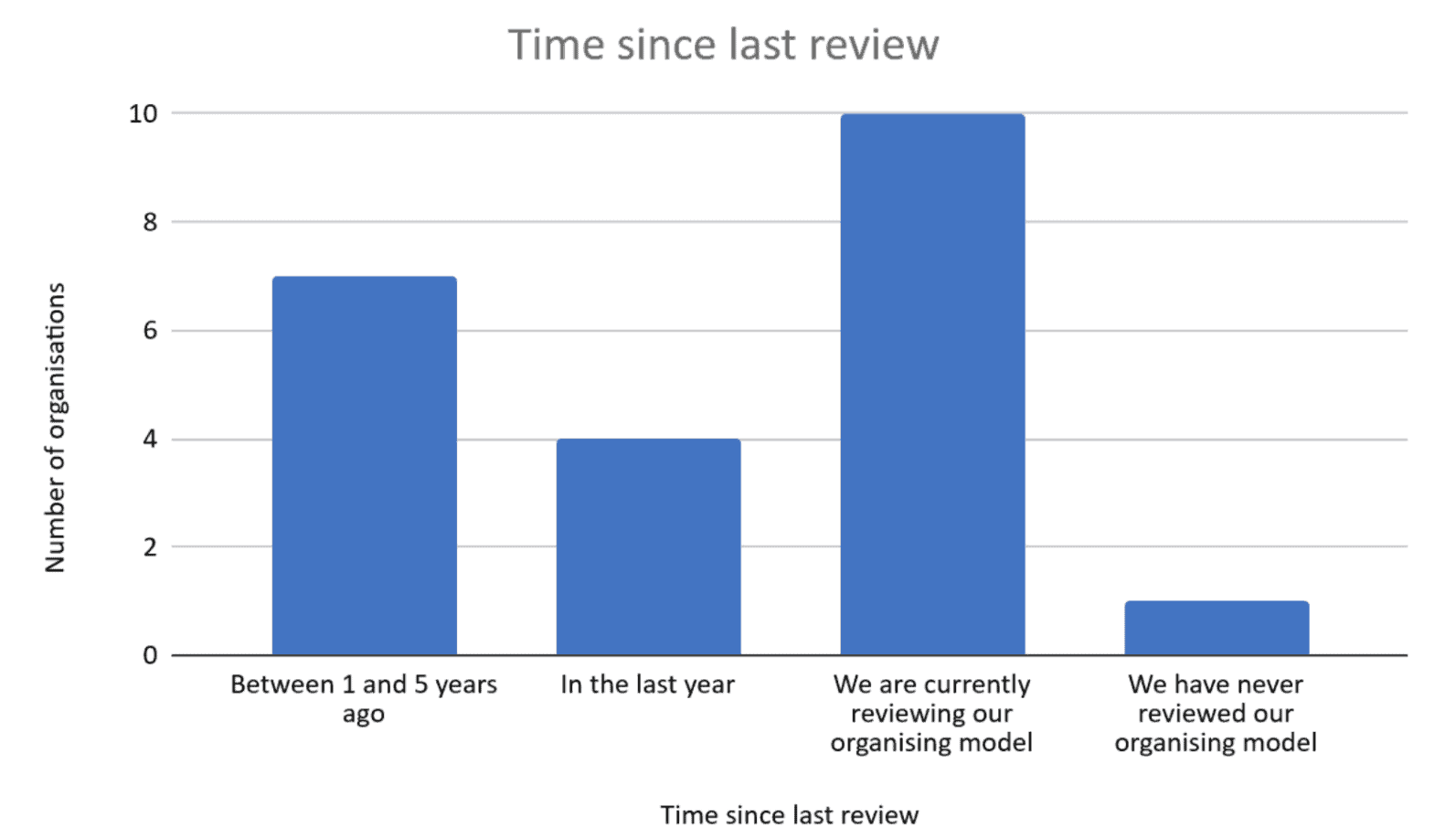 Many survey respondents also noted internal challenges that they have experienced in trying to manage or expand their organising model. Organisations currently undertaking reviews of their model often mention a desire to overcome these challenges and find solutions that would be durable, reduce pressure on staff and increase retention of volunteers.

While a range of challenges were identified by survey respondents related to managing and supporting their models, these helped identify the best opportunities for strengthening models in the future. Specifically, respondents noted two overarching areas for improvement: engaging people within their organising model, and managing the structure of their organising model.

Engaging People within an Organising Model

A number of writers and researchers have proved evidence-based strategies to help organisations achieve these outcomes. A summary of this work is provided in the article ‘Academic Research on Engaging and Retaining Volunteers in Organising Programs’ (coming soon). See the People Within Organising Models article for more information and the Explore Further at the bottom of this article for relevant resources.

One survey respondent provided an overview of how their organising model was designed to incorporate staff and volunteer needs through ‘Key support systems’, as well as build in their movement principles and mobilisation processes via ‘Foundational concepts’ and ‘Key structures’. The components of each of these elements are explained in the diagram below. Elements of an Organising Model

The biggest opportunity for improving the management of organising models was to reduce pressure on staff. A range of solutions for this common problem were provided. For example:

Survey respondents noted other challenges and opportunities related to managing their organising structures. One of these – noted by three groups – was the need to improve their data and monitoring systems. One noted that one of the key questions of their organising model review was how they manage their data, and use it to grow and maintain their network. Another organisation stated ‘We also need a way to better track activists in our database – Action Network really fails us!’.