The Shape of Organising Models

This article is one of a series developed using survey information provided by twenty four organisations. Twenty of these organisations employed paid staff to manage their organising model, and eight had been engaged in organising for either 1-5 years or more than 10 years.

You can read more about the survey responses in other articles in this series, including Organising Model Structures: Influences, Challenges and Opportunities.

Accessibility Note: This article contains many charts and diagrams which may not be read by screen-readers. Please contact us if you need the information in a different format.

Observations about the shape of organising models

We found a lot of similarities across the organising models submitted via the survey. Many used the snowflake model, or a modified snowflake model with additional teams. Some organising models reflected a traditional organisational structure chart, showing lines of communication and accountability. Others utilised the Circles of Commitment, with modifications reflecting their situation.

Our findings are in contrast to the P3 Lab’s Building Structure Shapes: What structure reveals about strategy from six-movement organizations in transition which defined a number of shapes.

For each organizational case, the report offers a structure shape. These metaphorical shapes, like a boat, a big tent, a house, a Rubik’s cube, and a fractal, represent how an organization manages a particular contradiction or tension present in one of the three lenses on structuring (membership, staffing and movement ecologies).

If you would like to suggest shapes for the organising models used in Australia and Aotearoa please get in touch.

Many organisations aim to support local groups that are based in particular geographical areas. These can include state or territory-based groups, or small teams of individuals in remote, rural or regional areas.

For example supporters of the Australian Conservation Foundation can view this map on the ACF website to find out if there is a group active in their local area. Local groups enable organisations to support people in taking action on matters that are important to them and their local community. However, one of the challenges of successfully sustaining geographically dispersed groups is maintaining a sense of connection and community across the organising model. The following model demonstrates how specific individuals and teams are connected across geographic boundaries, and how these connections are supported through meetings and events. 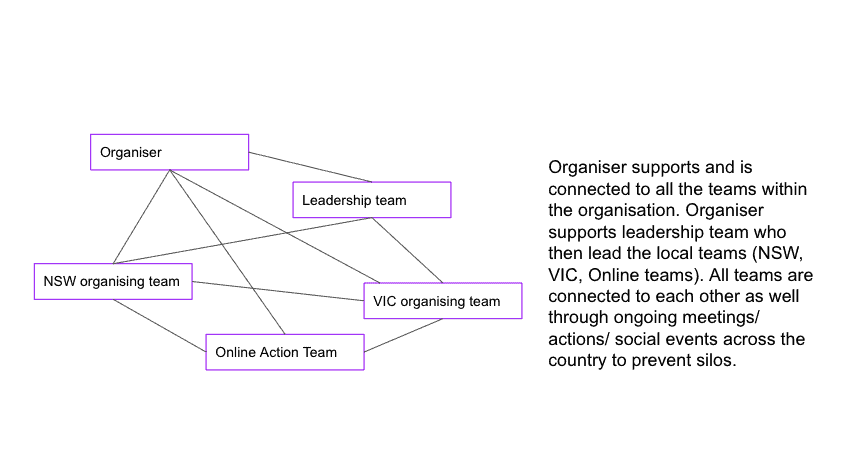 Formal connections between individuals and teams within one geographically based organising model: Democracy in Colour.

Recruitment in localities where we have local groups, volunteers have lots of opportunities to learn and step up to take on more responsibility. Many organisations which support issue/skill based groups also have a geographic component. In the past this geographic component has been necessary given the need to bring people together face-to-face. With the shift to online organising during the pandemic recruiting and retaining people from diverse locations has become far easier. Furthermore, these groups offer people the opportunity to participate in many different ways.

Our organising model is focussed around campaign participation and building networks through common issues. I think this is good because we attract people who are interested in taking action now, and participation has a goal and target outcomes.

While some organising models are structured predominantly around geographic or issue/skill/identity based sub-groups, the majority of organisations use a mix of the two. This is particularly the case for organisations able to dedicate staff to developing and implementing an organising model supporting a range of different types of sub-groups. The following model is one example. 350 Australia’s mixed organising model using a range of geographically based sub-groups alongside groups working on particular initiatives, issues or tasks. Our organisational model strengths are its scalability, that it is replicable, systematic and consistent. It is adaptable, strategic & impactful. Members feel like they are a part of a community, there’s something for everyone and it has a relational focus.

Some organising models using a mix of sub-group types also include governance and staff roles into the structure. This can include Advisory Teams, a Board, Councillors or other types of governance structures. The following model provides an example of this. 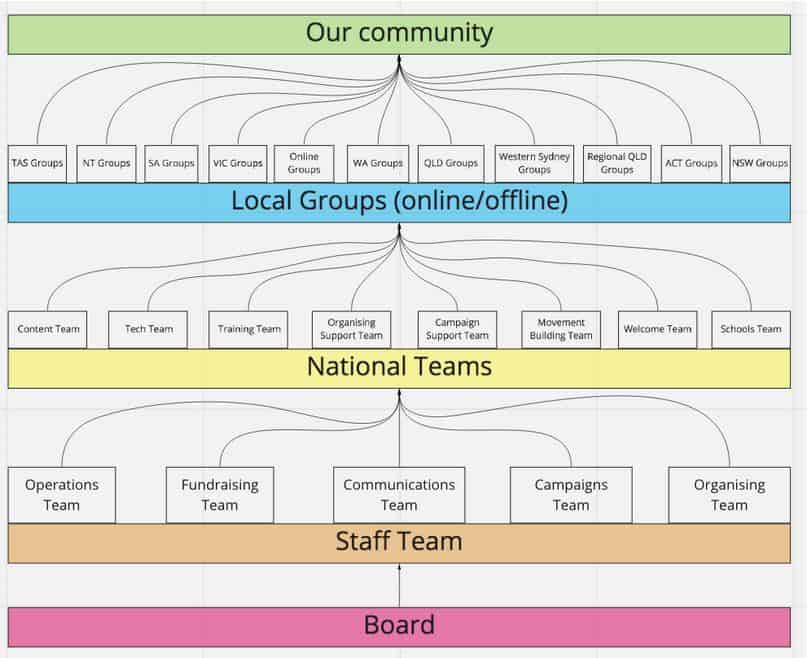 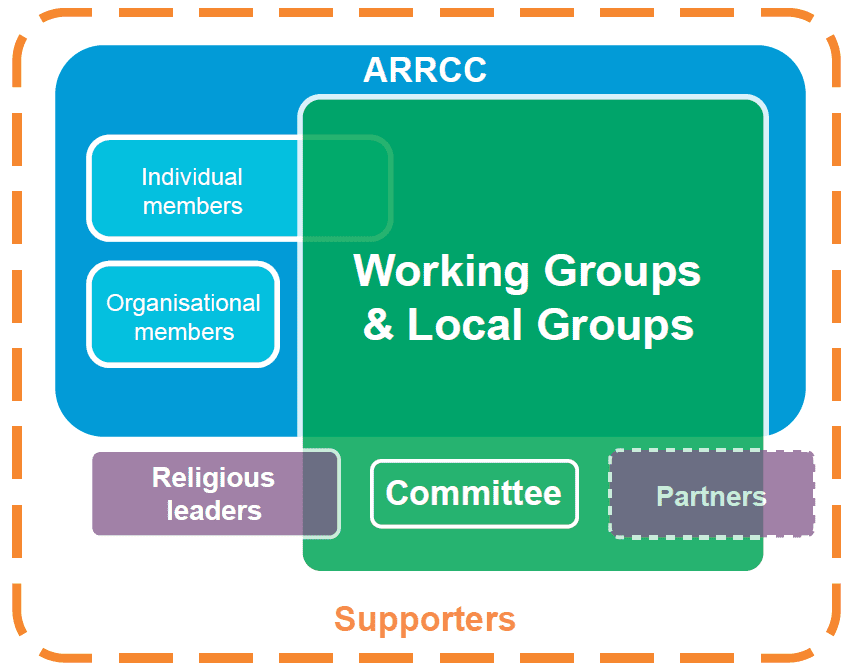 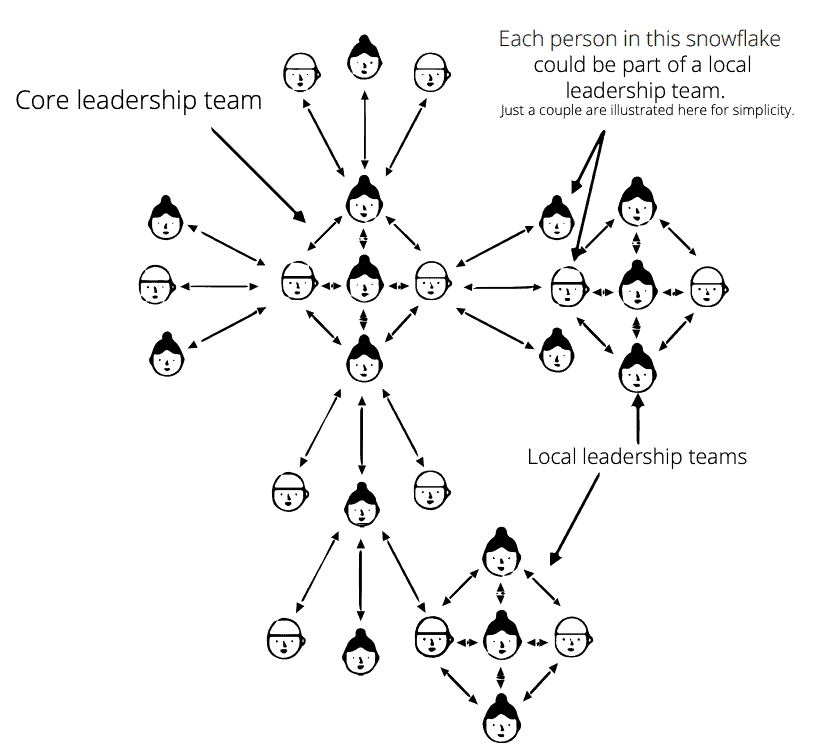 The snowflake model from the handbook ‘Organizing: People, Power, Change’

The strength of the snowflake model lies in its focus on building strong relationships between each connection. This has enabled some organisations to not only recruit new volunteers, but also support and retain them over time.

We are still exploring it but building from a “local organiser” focus with the role of the core volunteer to connect with existing groups and organisations as well as bringing on board new people. This is instead of a group building focus at the moment. This may change over time, but currently it is working for us. Environment Victoria’s organising model is built around a snowflake recruitment process supported by staff and an Action Network Support Team.

Other organisations use a snowflake model but base this around groups, or teams of individuals working together. The model below uses this approach to support a very large number of groups, that otherwise would be difficult to sustain via a central team of staff or organisers. It also helps build stronger relationships between groups that can offer mutual support independent of the centralised team. The focus on relational organising and the snowflake model means that everyone is connected with each other and things can function without the organiser around most of the time.

One organisation has moved towards a snowflake, or ‘distributed organising’ system. In their model paid staff focus less on directly mobilising supporters and more closely on enabling and training volunteer organisers. Their organising model aims to build multiple expert organising teams, which are self-sustaining and motivated by working on tactics and issues that are relevant and meaningful to them. At the same time, this reduces pressure on staff time, and fosters stronger personal relationships between leaders, advocates and active supporters.

Extinction Rebellion South Australia: A grassroots organising model which indicates how groups within the model communicate

The self-organising system (SOS) used by Extinction Rebellion shares similarities with models that form from grassroots mobilisation. Five characteristics mould the shape of an SOS model:

More information about these characteristics can be found on the Extinction Rebellion Derby (UK) website. Activists hold the key elements and functions of the organising model. This is achieved by decentralising the knowledge basis and skill sets and empowering members and activists to lead and set the direction.

The following example is from a group which does not seek to organise groups. Instead they organise individuals around mobilisation moments, and recruit volunteers with specific skills and expertise (on an individual basis). 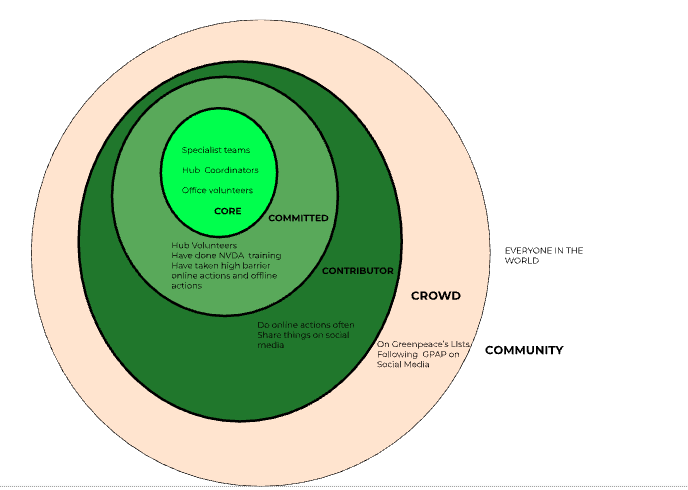 Many different types of organising models seek to support the four principles common to directed-network campaigns. These were defined by Networked Change in their 2016 report ‘Networked Change: How progressive campaigns are won in the 21st Century’. 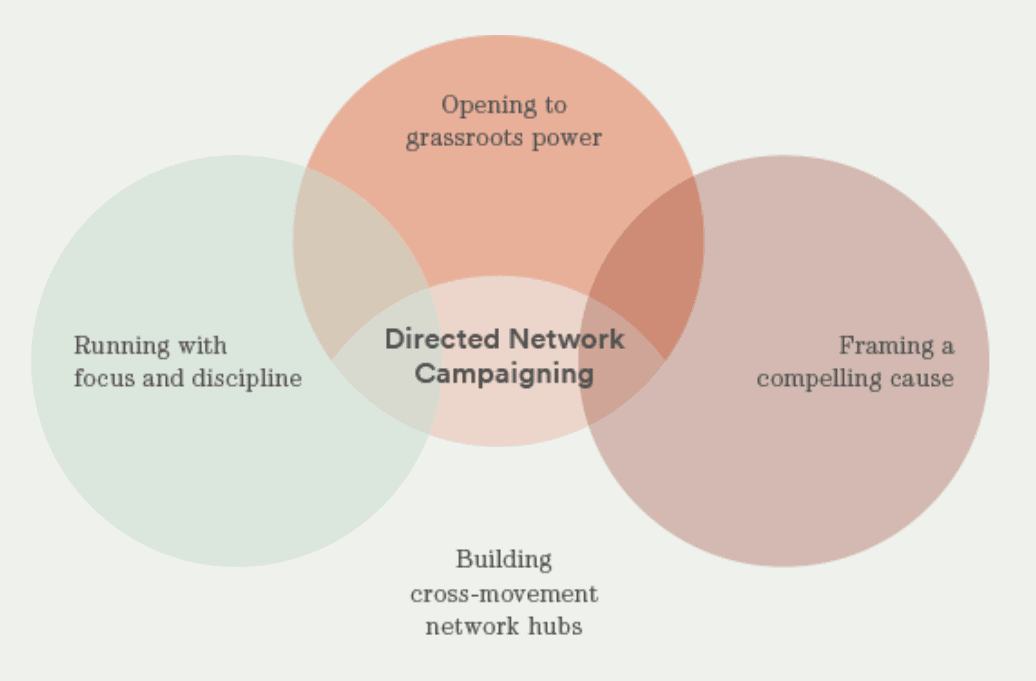 The four principles of directed-network campaigns. ‘Networked Change: How progressive campaigns are won in the 21st Century’, Mogus & Liacas, 2016. Page 6.

In directed-network campaigns a central group (usually with staff) help develop the framing of messaging on the particular issue. Staff will also develop and coordinate strategies and tactics, but with substantial freedom and agency provided to the grassroots. Directed-networked campaigns can also encompass groups and movements, and their structures also often borrow from other traditions. In the following model a centralised team supports the movement, which mostly consists of local action groups. However, the model is further supported by a parent organisation, a Board, a central leadership team and a council. Using moments of momentum to bring energy. The Directed Network model – while it has its downsides – overall helps build national cohesion and focus to win.

Participation and framing based models The model is also extremely relational which means in a relatively short period of time, advocates become skilled in parliamentary engagement quickly.

Similarly, some organisations focus on framing and messaging. The particular communication goals of relevance are identified first, and then resources pooled across all goals. Building a grassroots movement is at the centre of everything that we do, because we know it’s only through people-power that we can achieve our vision for the future. People power is built by helping individuals realise their own agency to change the world by acting with other people on strategic campaigns that shift power from big corporations to communities.

Organising models for the political arena

In addition to organisations which focus on mobilising outside of the political arena, some focus exclusively on that area. These organisations often focus on growing local groups in electorates at peak moments within the electoral cycle. Their structure needs to include groups or committees which accommodate periods of rapid growth and concentrated action, as well as governance bodies that provide consistency and stability.

Our model is transparent, and allows growth and empowerment of our grassroots members as they join us. It requires genuine commitment from members to self-select and volunteer to build solidarity and work in the interests of our political collective.