In the fall of 2019, Sunrise Movement was running up against the limits of traditional distributed organizing. Despite the success of digital actions at bringing people in the door, they were not successfully supporting those new people to start Sunrise chapters in their community.

They took a risk, pulling from the evangelical church’s small group model, and developed the Sunrise Strike Circle program.

Watch this webinar recording to learn how Sunrise: 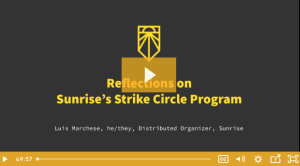 Luis Marchese is a distributed organizer at Sunrise and developed the strike circles program.

Randall Smith is a coach and advisor at PowerLabs. He worked with Sunrise Movement and several other organizations to develop small group programs that bring people into the organization and moves them into roles to build the strategic capacity and power of the organization.