This article presents the results of the survey which focus on how people gather to take collective action as part of organising programs. In particular, it considers how organisations structure what we call in this article ‘sub-groups’; groups of individuals volunteering for the organisation. These can include local groups active within a geographic region, as well as groups working on specific issues, skills or other basis. The article Organising Model Structures: Influences, Challenges and Opportunities provides an overview of these various arrangements.

Accessibility Note: This article contains graphs and diagrams which may not be read by screen-readers. The content of the graphs is described in the accompanying text. Please contact us if you need the information in a different format.

Many organisations use some version of the Circles of Commitment framework to track levels of engagement within their organising models. This model proposes five categories of engagement:

Twenty survey respondents provided numbers of currently active people in each circle component. The graphic below shows the median response for each circle, with the minimum on the left and maximum on the right. 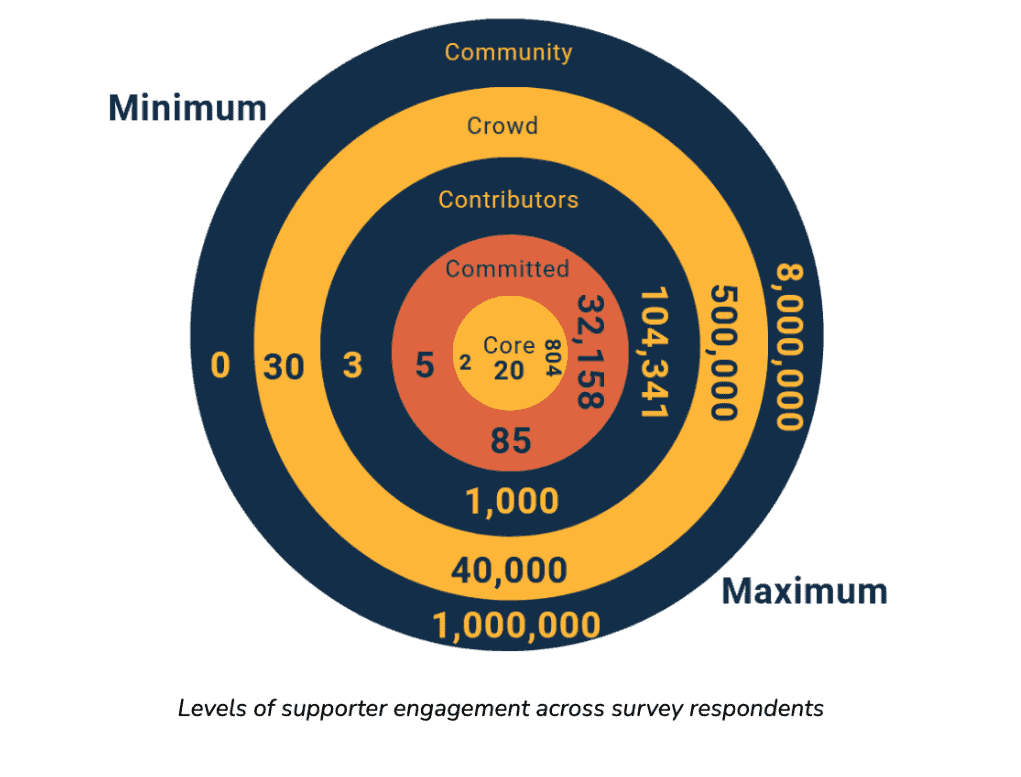 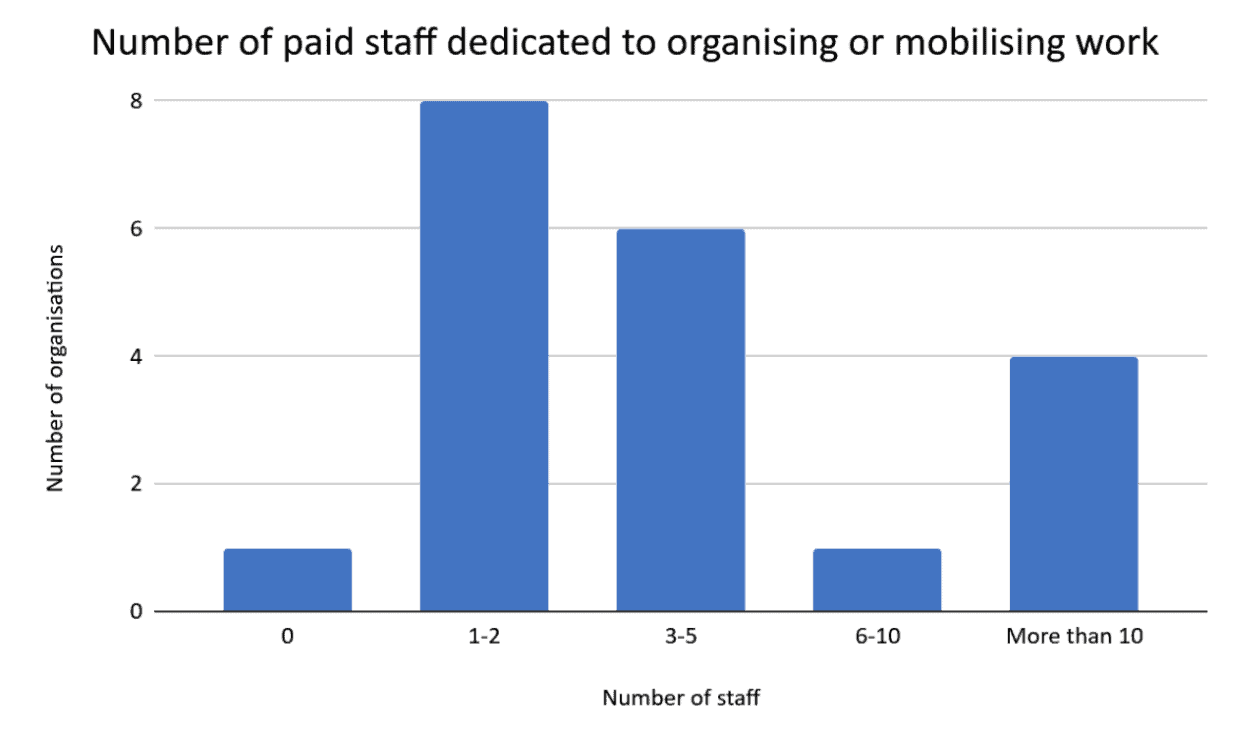 Some organisations noted that they distinguished between staff roles related to organising. For example, one organisation employed staff to either work as organisers of groups, or organisers of tactics. Another organisation employed paid organising staff to assist other advocacy groups unable or unwilling to employ staff directly. Finally, another group noted how key moments of mobilisation influenced staff numbers, in some cases quadrupling staff at critical organising times.

We have an additional circle of active members of the crowd – people who regularly take action who would include volunteers and donors but others who are active in a campaign sense without volunteering or donating. 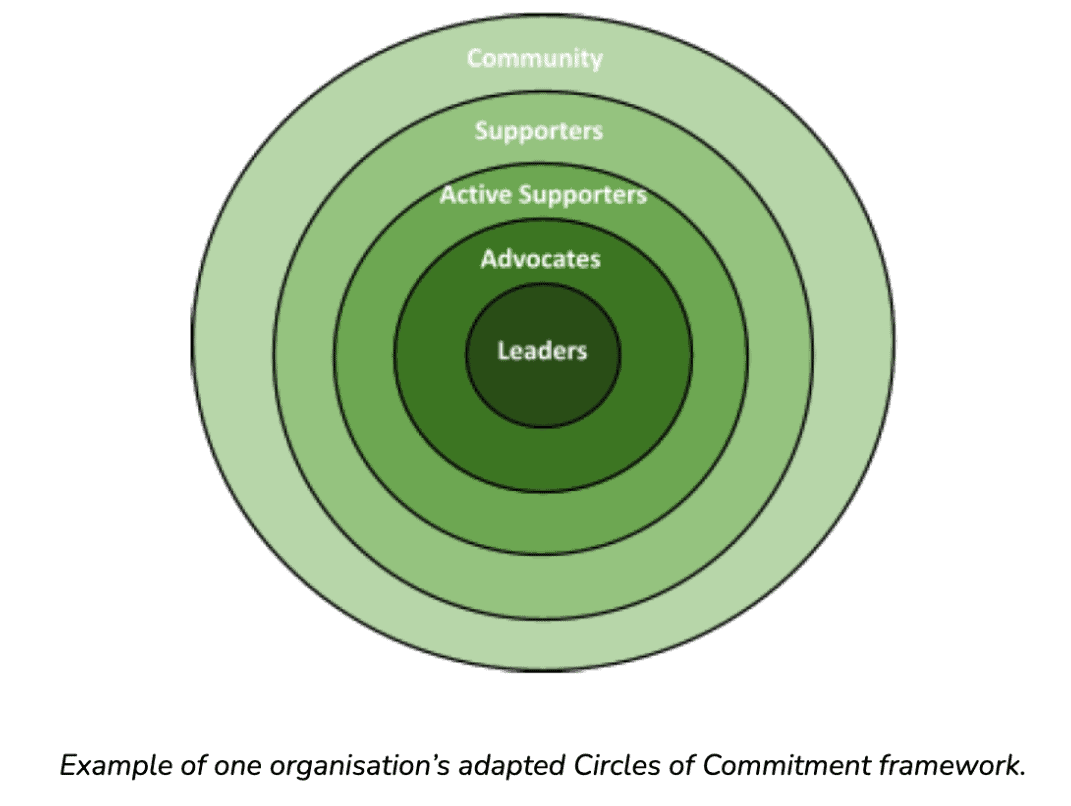 One organisation used an adapted Circles of Commitment framework (Figure above) as it allowed for both leadership and donation behaviours. For example, ‘Supporters’ could include individuals who had given one or small donations, while ‘Active Supporters’ were either financial members or donors giving between $50 and $1,000 per year. Similarly, this model clearly identified a range of leadership behaviours. These included celebrity ambassadors, committee members, professional volunteers donating more than 50 hours per year, and major donors giving more than $5,000 per year.

We do have access through Action Network (database) to ladders of engagement but our ability and willingness to use them seriously is patchy. Currently a new attempt at attracting and retaining folks is going on, with new people and some new thinking going on.

One other organisation used the same Circles of Commitment labels, while defining some of the specific actions related to each level.

Survey respondents were also asked about who they targeted to join their sub-groups. The majority of respondents said that their organising constituency primarily included people who were interested in acting on a broad issue that impacted on many people. Many organisations also sought to mobilise people with lived experience (17 respondents) as well as individuals who were directly and currently impacted by the organisation’s particular issue (15 respondents). 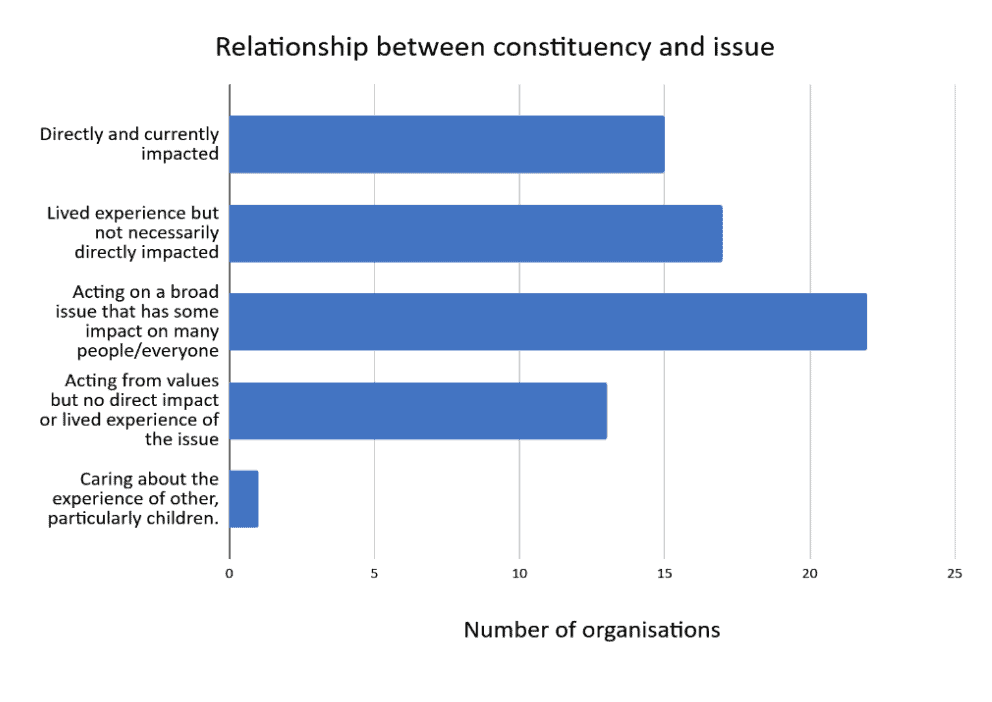 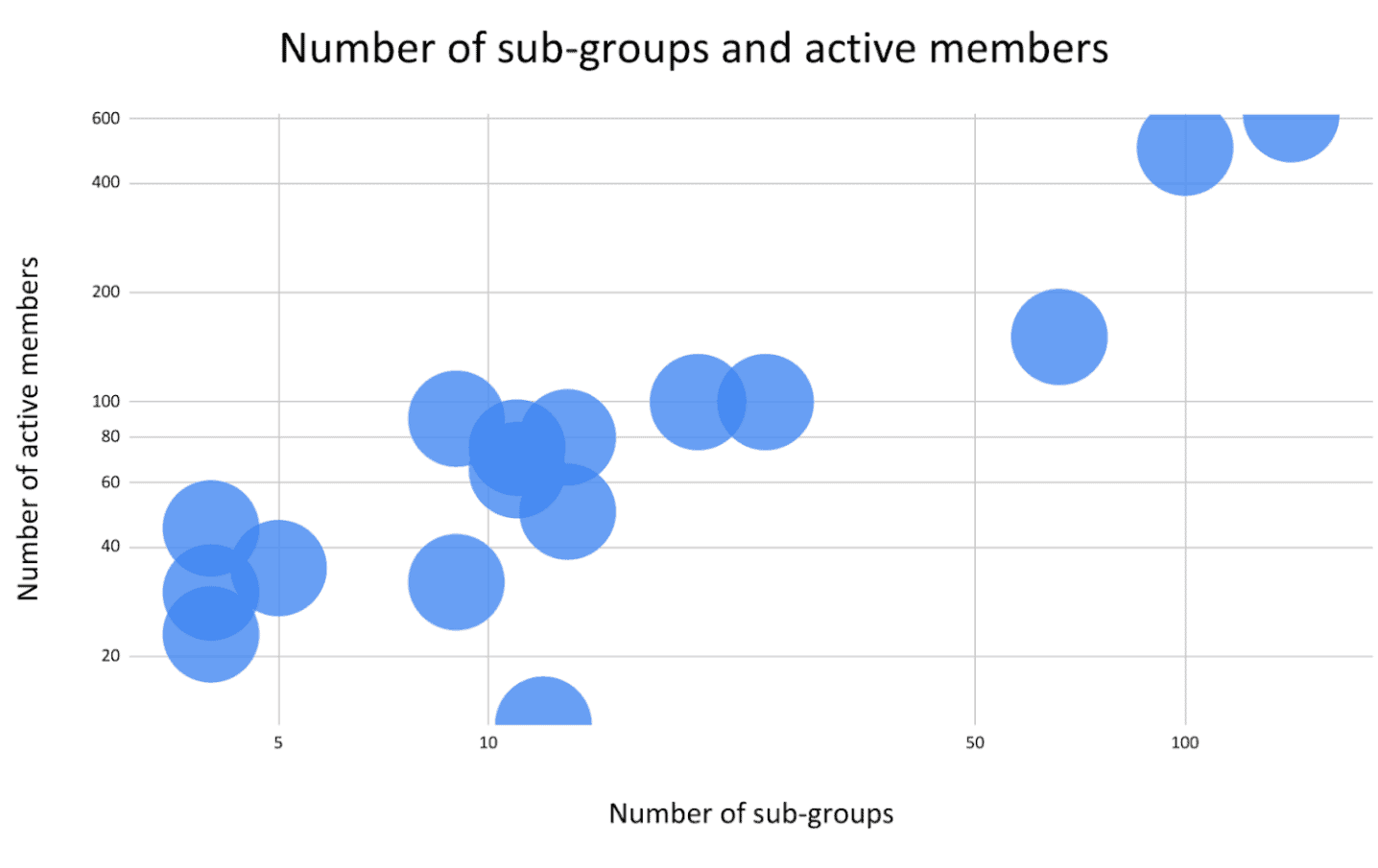 Roles and responsibilities within subgroups

Across organising models there is substantial variety in the internal structure of subgroups. This diversity predominantly relates to whether local group members are required to take on a formal role or not, and the level of autonomy afforded to each subgroup.

Ten survey respondents noted that they specify formal roles within each subgroup. Across these responses, 47 different roles were mentioned; the most common were ‘committee member’, ‘group convenor’, and ‘social media coordinator’. Three survey respondents did not assign any formal roles, while ten noted that some of their subgroups chose to assign roles but those roles varied across each subgroup. This variation occurred when organisations allowed their subgroups to self-govern and to have the autonomy to make their own decisions on how they structure and manage themselves.

Another variation in role assignment was found in organisations that direct groups to structure themselves around tasks rather than roles. In one organisation while each subgroup usually has a convenor, subgroup members can also assign leads for particular tasks such as recruitment and organising actions when required.

Whether organisations assigned formal roles or allowed subgroups to self-govern, one element was consistent. Subgroups were more likely to persist when ensuring that subgroups offered multiple roles, tasks or opportunities for new members to participate.

This was especially important at the initial participation stage. A number of organisations highlighted the importance of developing processes for integrating and welcoming new team members. Pre-planned pathways for participation helped build local groups and increase the likelihood they would persist over time. Similarly, Fellowship Programs, internships and volunteer programs all helped attract new volunteers and build strong relationships within each subgroup and the wider organisation.

In addition to formal programs for attracting new subgroup members, some larger organisations offered multiple entry points for new participation. One organisation enables people to join the organisation at different levels. People can simply join their large audience and supporter base and receive regular updates within the need to take action. Alternatively, interested people can join a variety of subgroups, step up into a group leader role, or else participate in activities which may closely match their particular interests or skill set. This model offers multiple steps on the ladder of engagement but can be challenging and staff intensive to successfully manage.

An important element in building and sustaining local groups was the opportunity for local group members to participate in training and mentoring. Training was seen as critical for building activist skills both for engaging in activism and for effectively working in their local group. One organisation noted that their training and leadership programs enabled clear steps for volunteers up the ladder of engagement.

The other important aspect of our work is our youth organising – involving training, paid internships, creating opportunities to speak and lead.

How people are organised within subgroups was often difficult to manage in practice, particularly where organisations had limited staff or resources available for support.

Many organisations recognised these challenges and noted that they remain some of the most pressing concerns for successful sustaining their organising models. One organisation provided an overview of their strategy to recruit and retain people, deliberately using a distributed (or ‘snowflake’) organising model to empower local volunteers to be active in this area as well. Within this distributed organising approach, paid organisers took on the responsibility of creating multiple opportunities for people to join the organisation and move up in their circle of engagement. They did this through organising a range of events and programs, including: