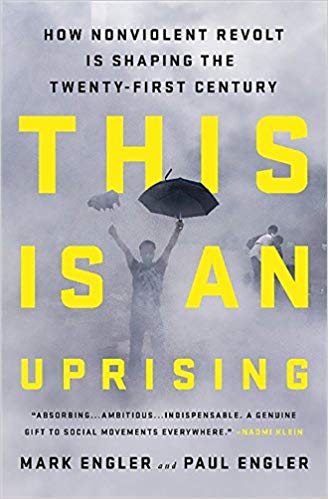 A review of Paul and Mark Engler’s 2016 book This is an Uprising: How Nonviolent Revolt Is Shaping the Twenty-First Century.

Does strategic community organising create and lead sweeping social change? Or does social change momentum arrive from disruptive actions and sweep individuals and organisations along with it? This is the question tackled by US labour, civil rights and immigration rights activist brothers Paul and Mark Engler’ This is an Uprising; the answer, of course, is ‘both’.

This is an Uprising is an analysis of social change, how it has occurred, and how contemporary campaigners may make it occur again. It is being widely read and discussed among Australian climate activists. Using various 20th century case studies, including Martin Luther King’s civil rights campaign in Birmingham, the overthrow of Milosevic in Serbia, the marriage equality campaign, the Arab Spring and climate activism, the authors contrast different approaches to social change and identify the critical role of nonviolent civil resistance. In doing so they aim to draw out lessons and ideas that might be generalised and applied by contemporary campaigners.

One of the Englers’ key focuses is the putative tension between organising and mobilising. They examine this tension by contrasting two seminal thinkers. One, Saul Alinsky, championed “the slow, incremental building of community groups”, through relationships, leadership, and structures. The other, Frances Fox Pivens, argued in favour of “unruly broad-based disobedience, undertaken outside the confines of any formal organization”, with the view that mass protest could rapidly draw in and mobilise previously disengaged citizens. The Englers’ own view is that both are necessary:

“The future of social change in this country may well involve integrating these approaches— figuring out how the strengths of both structure and mass protest can be used in tandem— so that outbreaks of widespread revolt complement long-term organizing.”

This is an Uprising does justice to this sentiment. It provides a reasonable assessment of the strengths and weaknesses of each approach, and an analysis of how and when they can be used most effectively. Frustratingly, however, the authors seem transparently inclined towards the latter approach, despite their stated preference for an ‘integrated approach’. Further, they come across as claiming that an integrated approach is something novel that they have developed, despite the emphasis accorded to mobilisation by other modern organisers such as Marshall Ganz whose work on the Obama campaign pioneered the integration of relational organising with electoral mobilising. But whether or not we agree with the authors, or like their style of argument, the discussion is educational and provides many useful object lessons to help develop our own ideas, for example, the relationship between transactional smaller gains and transformational, revolutionary change.

This is an Uprising has great value in its detailed discussion of civil resistance and strategy for change. By “civil resistance”, the authors broadly mean the use of nonviolent direct action in the creation of a mass uprising: they give examples of the Civil Rights Movement with its street marches and lunch-counter sit-ins, as well as Gandhi’s salt march. In this sense, the idea of “civil resistance” is inclusive of the sorts of direct action we have seen in Australia such as strikes, the Green Bans, and blockades of forest clearing or coal mining and export. However, civil resistance as the Englers describe it implies a shift away from action intended to prevent, say, a forest being cleared, and towards more symbolic actions primarily intended to grow majority public support.

The enthusiasm for this book amongst Australian climate activists comes as no surprise. Since the collapse of the Copenhagen climate talks in 2009, there has been a growing recognition of the need both to win more public support and to build a lasting power base to push for action on global warming. Complementing this, there has been an increased intensity of civil resistance, from the iconic and enduring Maules Creek blockade, to the recent mass action at the Newcastle coal port, ‘Breakfree’. Wins, such as the success of the Bentley blockade, provide an indication of what works. Yet with a newly-returned Coalition Government ready to keep propping up the coal industry, there is a hunger to foster the mass participation necessary to stand up to both the Government and the coal industry. And This is an Uprising offers a tantalising glimpse of how civil resistance can be used to achieve just that.

This is an Uprising offers us a model for thinking about social change. The point of a model isn’t to be true, but to be useful. The book isn’t a gospel, nor are the authors entirely objective (nor am I). Regardless, the book is a highly useful tool for social change activists. At a time when Australian civil society is confronting seemingly intractable social problems, This is an Uprising not only identifies possible ways forward, but offers useful context and guidance for how this way might be navigated.

This review was originally published by SEARCH Foundation in their special edition on environmental justice, benefitting from the editorial input of Geoff Evans.

For more reviews, articles and details about buying the book see This is an Uprising.