Bill Moyer developed the Movement Action Plan (MAP), incorporating 8 stages of a social movement and four roles of social activism. MAP was based on Moyer’s observation of social movements over many decades; it was initially developed during the 1970s and further refined and applied it up until his death in 2002.

The eight stages of the Movement Action Plan provide a model activists can use for diagnosing the current stage of their movement as well as planning how to move forward.

The four roles of social activism framework helps activists understand the different roles required in social change, how to play each role effectively, and foster understanding and collaboration across the roles.

Due to the popularity of the Movement Action Plan the Commons librarians have gathered summaries, videos, articles, analysis, and training tools. We hope these materials help you dig deeper into MAP and share the lessons with others.

Here is a summary of the eight stages of social movements by Anna Rose taken as an excerpt from Bill Moyer’s Movement Action Plan.

In this first stage—normal times—there are many conditions that grossly violate widely held, cherished human values such as freedom, democracy, security, and justice, and the best interests of society as a whole. Normal times are politically quiet times. Some past normal times were the violations of Blacks’ civil rights before 1960; the Vietnam War before 1967.

The intensity of public feeling, opinion, and upset required for social movements to occur can happen only when the public realizes that the governmental policies violate widely held beliefs and values. The public’s upset becomes especially intensified when official authorities violate the public trust by using the power of office to deceive the public and govern unfairly and unlawfully.

Hannah Arendt wrote that “people are more likely driven to action by the unveiling of hypocrisy than the prevailing conditions.”

The “take-off” of a new social movement requires preconditions that build up over many years. These conditions include broad historic developments, a growing discontented population of victims and allies, and a budding autonomous grassroots opposition, all of which encourage discontent with the present conditions, raise expectations that they can change, and provide the means to do it.

For example, some of the historical forces that made the 1960s ripe for the Black civil rights movement included the emergence of independent Black African countries, the large Northern migration of Blacks who maintained their ties to the segregated South, the rising black college student population, and the 1954 Supreme Court’s Brown vs. U.S. decision that provided a legal basis for full civil rights.

New social movements surprise and shock everyone when they burst into the public spotlight on the evening TV news and in newspaper headlines. Overnight, a previously unrecognized social problem becomes a social issue that everyone is talking about. It starts with a highly publicized, shocking incident, a “trigger event”, followed by a nonviolent action campaign that includes large rallies and dramatic civil disobedience. Soon these are repeated in local communities around the country.

The trigger event is a shocking incident that dramatically reveals a critical social problem to the general public in a new and vivid way, such as the arrest of Rosa Parks for refusing to move to the back of a Montgomery bus in 1955 or NATO’s 1979 announcement to deploy American Cruise and Pershing 2 nuclear weapons in Europe.

Trigger events can be deliberate acts by individuals, governments, or the opponents, or they can be accidents.

After a year or two, the high hopes of movement take-off seems inevitably to turn into despair. Most activists lose their faith that success is just around the corner and come to believe that it is never going to happen. They perceive that the power holders are too strong, their movement has failed, and their own efforts have been futile.

The movement must consciously undergo a transformation from spontaneous protest, operating in a short-term crisis, to a long-term popular struggle to achieve positive social change. It needs to win over the neutrality, sympathies, opinions, and even support of an increasingly larger majority of the populace and involve many of them in the process of opposition and change.

The central agency of opposition must slowly change from the new wave activists and groups to the great majority of nonpolitical populace, the PPOs, and the mainstream political forces as they are convinced to agree with the movement’s position. The majority stage is a long process of eroding the social, political, and economic supports that enable the powerholders to continue their policies.

It is a slow process of social transformation that create a new social and political consensus, reversing those of normal times.

Stage Seven begins when the long process of building opposition reaches a new plateau in which the new social consensus turns the tide of power against the powerholders and begins an endgame process leading to the movement’s success. The Stage Seven process can take three forms: dramatic showdown, quiet showdown, or attrition.

The success achieved in Stage Seven is not the end of the struggle but a basis for continuing that struggle and creating new beginnings. 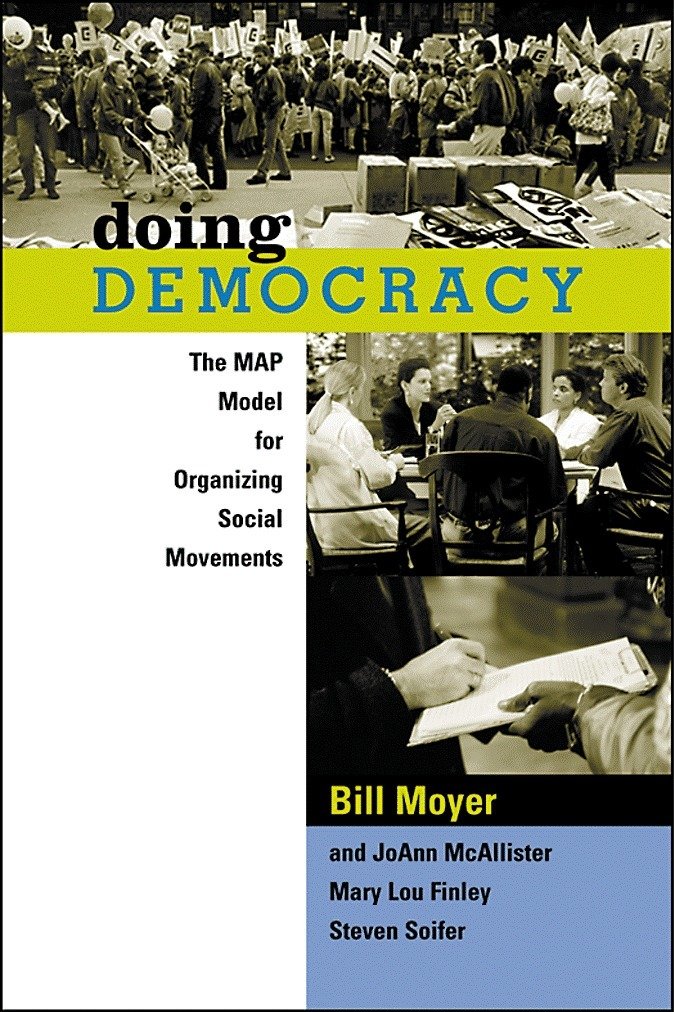 For more detail read Bill Moyer’s book, Doing Democracy: The MAP Model for Organizing Social Movements
Citizen activism has achieved many positive results. But the road to success for social movements is often complex, usually lasting many years, with few guides for evaluating the precise stage of a movement’s evolution to determine the best way forward. Doing Democracy provides both a theory and working model for understanding and analyzing social movements, ensuring that they are successful in the long term. Beginning with an overview of social movement theory and the MAP (Movement Action Plan) model, Doing Democracy outlines the eight stages of social movements, the four roles of activists, and case studies from the civil rights, anti-nuclear energy, Central America, gay/lesbian, women’s health, and globalization movements. – Read online on the Internet Archive or purchase from the Publisher’s website.

Video Source: Bill Moyer’s 8 stages in the development of a movement by the Gandhi Nonviolence Youtube Channel

Video – The Moyer Model: The Late Social Movement Theorist Bill Moyer
Watch Bill Moyer’s last public lecture just prior to his death, beloved activist, teacher and social movement analyst Bill Moyer summarized the insights of a lifetime about how social movements grow and succeed, and about his vision of a new culture emerging through the cracks of a declining empire.

Here is an introduction to the four crucial roles required for social movement success. Activists need to become aware of the roles they and their organizations are playing in the larger social movement. There are four different roles activists and social movements need to play in order to successfully create social change: the citizen, rebel, change agent, and reformer. Each role has different purposes, styles, skills, and needs and can be played effectively or ineffectively.

Social movement activists need first to be seen by the public as responsible citizens. They must win the respect and, ultimately, the acceptance of the majority of ordinary citizens in order for their movements to succeed. Consequently, effective citizen activists need to say “Yes!” to those fundamental principles, values, and symbols of a good society that are also accepted by the general public. At the same time, activists must be rebels who say a loud “No!” and protest social conditions and institutional policies and practices that violate core societal values and principles.

Activists need to be change agents who work to educate, organize, and involve the general public to actively oppose present policies and seek positive, constructive solutions. Finally, activists must also be reformers who work with the official political and judicial structures to incorporate solutions into new laws and the policies and practices of society’s public and private institutions. Then they must work to get them accepted as the conventional wisdom of mainstream society.

Both individual activists and movement organizations need to understand that social movements require all four roles and that participants and their organizations can choose which ones to play depending on their own make-up and the needs of the movement. Moreover, they need to distinguish between effective and ineffective ways of playing these roles. Understanding a social movement’s need to have all four roles played effectively can help reduce antagonism and promote cooperation among different groups of activists and organizations. The following descriptions of the four roles include effective and ineffective ways to play them. Fuller examination of the four roles can be found in the full chapter ‘The Four Roles of Social Activism’ in Doing Democracy: The MAP Model for Organizing Social Movements. The Four Activist Roles – Participation in the 8 Stages

Here is a diagram visualising the participation rate regarding the 4 different roles in the eight different stages of progress.