We’ve been talking a lot about social movements at Progress. I’ve been asked to contribute a resource that I use in my campaigning work, so I’ve created a summary guide to one of the most useful foundations of movement theory out there: Bill Moyer’s Movement Action Plan (MAP).

James Whelan and Sam La Rocca from The Change Agency first introduced me to this tool about a decade ago when I was heavily involved in student activism, and I’ve referred to it ever since. They explain it well on their site:

U.S. activist-educator Bill Moyer conceived Movement Action Plan (MAP) to explain and explore the stages and advocacy roles evident in successful social movements. The model’s apparent simplicity may hold the key to its appeal and practical application to activists who seek to analyse, plan and enhance their campaigns. The eight stages and four activist roles provide a language and a framework for discussions and analyses.

Bill Moyer wrote the Movement Action Plan strategic framework in 1987. Yes, it’s a long time ago, but don’t let that put you off. It’s still very relevant today. Moyer realised, in his own words, that:

Within a few years after achieving the goals of “take-off”, every major social movement of the past twenty years has undergone a significant collapse, in which activists believed that their movements had failed, the power institutions were too powerful, and their own efforts were futile. This has happened even when movements were actually progressing reasonably well along the normal path taken by past successful movements!

To counter this, he wrote the movement action plan (MAP). He describes eight stages through which social movements normally progress over a period of years and decades. For each state, MAP describes the role of the public, power-holders, and the movement. It provides organizers with a map of the long road of successful movements, which helps them guide their movement along the way.

8 Stages of a Social Movement – Summary

A summary of the eight stages of social movements by Anna Rose taken in excerpts from Bill Moyer’s Movement Action Plan.

In this first stage—normal times—there are many conditions that grossly violate widely held, cherished human values such as freedom, democracy, security, and justice, and the best interests of society as a whole. Normal times are politically quiet times. Some past normal times were the violations of Blacks’ civil rights before 1960; the Vietnam War before 1967.

The intensity of public feeling, opinion, and upset required for social movements to occur can happen only when the public realizes that the governmental policies violate widely held beliefs and values. The public’s upset becomes especially intensified when official authorities violate the public trust by using the power of office to deceive the public and govern unfairly and unlawfully. Hannah Arendt wrote that “people are more likely driven to action by the unveiling of hypocrisy than the prevailing conditions.”

The “take-off” of a new social movement requires preconditions that build up over many years. These conditions include broad historic developments, a growing discontented population of victims and allies, and a budding autonomous grassroots opposition, all of which encourage discontent with the present conditions, raise expectations that they can change, and provide the means to do it.

For example, some of the historical forces that made the 1960s ripe for the Black civil rights movement included the emergence of independent Black African countries, the large Northern migration of Blacks who maintained their ties to the segregated South, the rising black college student population, and the 1954 Supreme Court’s Brown vs. U.S. decision that provided a legal basis for full civil rights.

New social movements surprise and shock everyone when they burst into the public spotlight on the evening TV news and in newspaper headlines. Overnight, a previously unrecognized social problem becomes a social issue that everyone is talking about. It starts with a highly publicized, shocking incident, a “trigger event”, followed by a nonviolent action campaign that includes large rallies and dramatic civil disobedience. Soon these are repeated in local communities around the country.

The trigger event is a shocking incident that dramatically reveals a critical social problem to the general public in a new and vivid way, such as the arrest of Rosa Parks for refusing to move to the back of a Montgomery bus in 1955 or NATO’s 1979 announcement to deploy American Cruise and Pershing 2 nuclear weapons in Europe. Trigger events can be deliberate acts by individuals, governments, or the opponents, or they can be accidents.

After a year or two, the high hopes of movement take-off seems inevitably to turn into despair. Most activists lose their faith that success is just around the corner and come to believe that it is never going to happen. They perceive that the powerholders are too strong, their  movement has failed, and their own efforts have been futile. Most surprising is the fact that this identity crisis of powerlessness and failure happens when the movement is outrageously successful—when the movement has just achieved all of the goals of the take-off stage within two years. This stage of feelings of self-identity crisis and powerlessness occurs simultaneously with Stage Six because the movement as a whole has progressed to the majority stage.

The movement must consciously undergo a transformation from spontaneous protest, operating in a short-term crisis, to a long-term popular struggle to achieve positive social change. It needs to win over the neutrality, sympathies, opinions, and even support of an increasingly larger majority of the populace and involve many of them in the process of opposition and change.

The central agency of opposition must slowly change from the new wave activists and groups to the great majority of nonpolitical populace, the PPOs, and the mainstream political forces as they are convinced to agree with the movement’s position. The majority stage is a long process of eroding the social, political, and economic supports that enable the powerholders to continue their policies. It is a slow process of social transformation that create a new social and political consensus, reversing those of normal times.

Stage Seven begins when the long process of building opposition reaches a new plateau in which the new social consensus turns the tide of power against the powerholders and begins an endgame process leading to the movement’s success. The Stage Seven process can take three forms: dramatic showdown, quiet showdown, or attrition.

The success achieved in Stage Seven is not the end of the struggle but a basis for continuing that struggle and creating new beginnings. 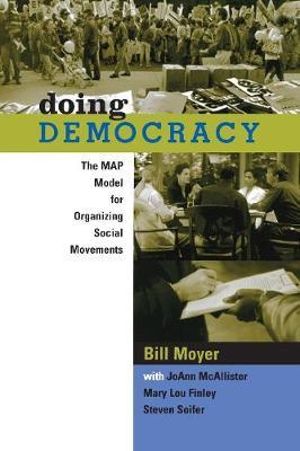