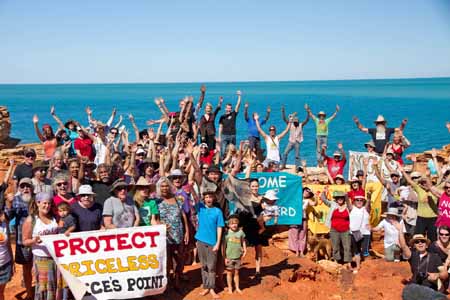 Opponents of the proposed gas hub show their support in an effort to stop the planned development. Photo: Bronte Turner for the Bob Brown Foundation

The following characteristics of effective and ineffective nonviolent direct action were gathered at a Melbourne Campaigners’ Network session in 2013. The session also featured a presentation by Nicola Paris about the campaign to stop the gas hub development at Walmadan (James Price Point in the Kimberley).

Nicola encouraged us to consider the role nonviolent direct action can play in campaigns. In small groups we reflected on our experiences and shared what makes NVDA either effective or ineffective. Here’s a summary of what folks came up with.

This is what we discussed on the night but of course there are many other factors which can render NVDA effective or ineffective. Learn from past experiences via these resources.

The No Gas campaign applied the following criteria to any NVDA actions that they undertook:

When you are planning your campaign make sure you are clear about the criteria for assessing potential tactics. See New Tactics in Human Rights for a wealth of resources, and of course Nicola Paris’ CounterAct for specialist NVDA resources.