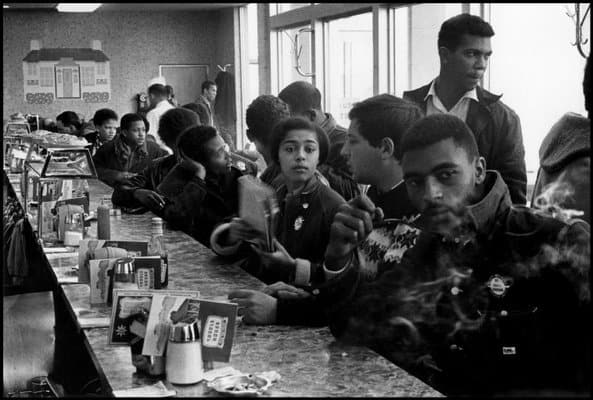 The Greensboro student sit-ins were powerful nonviolent action that succeeded, not only in their immediate goal, but also in building a lasting organisation. Joel Dignam shares the story and observatons from reading Taylor Branch’s Parting the Waters.

On the afternoon of February 1, 1960, four African-American students from segregated Negro colleges in Greensboro, North Carolina, visited a Woolworth’s store and took seats at the white-only lunch counter. They were refused service but remained there until the store’s closing, vowing to return the next morning. And return they did. In the intervening hours, their action had become the stuff of legend. Word spread rapidly between colleges and student groups – the next day, Tuesday, nineteen students joined them. By Wednesday, numbers had quadrupled again to eighty-five students.

The reaction from Woolworth’s was surprising. The white managers, instead of responding with threats, were flustered and awkward. Initially, the illegal sit-in was politely ignored, like a fart at a funeral, but, to continue the simile, it was too potent to merely dissipate. Within five days several hundred students were involved, with plans fomenting to target another nearby store. Within a week, sit-ins were occurring in neighbouring cities of Raleigh, Durham, and Winston-Salem. On February 12, the first arrests happened, with forty-one students from Raleigh being handcuffed.

By this time, other groups in the nascent civil rights movement were getting involved. On February 11, Fred Shuttleworth from the Southern Christian Leadership Conference, SCLC, (which had formed following the Montgomery Bus boycott) was one of the first established players to realise the significance of what was happening. “You must tell Martin [Luther King Jr.] that we must get with this,” he wrote, saying that the sit-ins might “shake up the world”. In Nashville on the same day as the arrests, non-violence tactician James Lawson ran what, it happens, was the first mass meeting of the new movement. Five hundred new volunteers and seventy-five veterans of non-violence crowded into a church. A crash course on nonviolence ran late into the night. An impressed Lawson liaised with King, the SCLC, and others, further expanding the tactic and organisational model. By the end of February, thirty-one Southern cities from eight different states were host to sit-in campaigns. (Lawson would later speak on April 15 to a conference of around 150 students that would form the Student Nonviolent Coordinating Committee, the SNCC, or “snick”.)

The campaign was a launching pad for a generation of student activists. One of these was Diane Nash. She acted as spokesperson for a group of arrestees from Nashville, who elected to face jail rather than pay a fine. “…if we pay these fines,” she declared, “we would be contributing to and supporting the injustice and immoral practices that have been performed in the arrest and conviction of the defendants.” Later at a public rally she would compel Nashville’s Mayor, Ben West, to speak out against segregation. Following his platitudinal statement of support, she seized the microphone and asked what he would do to stop racial discrimination. As he ducked and weaved, a hushed crowd held their breaths as she zeroed in on the crucial question: “do you recommend that the lunch counters be desegregated?” The mayor couldn’t help but yield: “Yes.” This happened on April 19. On May 10 six of Nashville’s major downtown lunch counters were desegregated. On Monday, July 25, the Woolworths in Greensboro, site of the initial sit-ins, followed suit.

The student sit-ins were a great success. Out of nowhere, students had rallied together, acted in solidarity, achieved change, and also created a group to explore future directions for the movement. Nice one! I think this is an inspirational story, and Diane Nash, in particular, seems pretty great. In addition, I’d like to point out three things: the unprecedented effect of the sit-ins, their use of non-violence, and the reaction from established friendly organisations.

Nobody saw it coming

Before February 1, 1960, nobody could have guessed that by May 10, African Americans could eat at a then-segregated lunch counter.

But change happened because of a conversation between four students:

Without a plan, without tactical goals, without having trained or roleplayed, or anticipated possible reactions, the four took a seat at the lunch counter. In effect, the sit-in was at first a surprise to these four participants themselves, who probably surprised themselves with their spur-of-the-moment action, before being surprised again by the reaction at Woolworth’s. Doubtless, Woolworth’s didn’t see it coming.

Too, nobody could have anticipated the initial effectiveness of the sit-in. According to Taylor Branch, the preceding three years had seen at least sixteen similar demonstrations, none of which effected lasting change, most of which didn’t even make the news. In contrast, “Greensboro helped define the new decade”.

The impact wasn’t only historically implausible, it was logistically implausible: these were four freshmen who felt like taking a stand against segregation. They didn’t have the connections or experience of other people involved in the civil rights movement.

Finally, the eventual success of the sit-in was unpredictable. King spoke in Nashville around the time of Mayor West’s capitulation to Diane Nash, saying that segregation was “surely finished”, although he was naturally uncertain about when it would expire. Just twenty days later, Nashville lunch counters were de-segregated. While there would have been some indications of impending success (in fact, the May 10 date was negotiated between storespeople and protest leaders), prior to this and to the outside eye the campaign may very well have seemed to be stuck, ineffective, or doomed. The events themselves may have given no indication of the victory that was around the corner.

Nonviolence was a thing before the sit-ins. Gandhi’s use of nonviolence in India was making waves in the Southern United States, and King himself had recently travelled to the newly-formed nation. But the use of nonviolence in this way – the “seeking out of a nonviolent confrontation with the segregation laws” – was groundshaking. The NAACP had a tendency towards campaigning through the courts, and the SCLC had achieved lacklustre results with its pushes to register African-American voters. King, an emerging leader of the movement, had been struggling since the Montgomery Bus Boycott to find a means of creating change. Yet his main skill was in oratory, and in his deliberating, he had a tendency towards obfuscation and theory. The students’ action came at the right time for King. As Taylor Branch writes, “With a simple, schoolboyish deed, the students cut through all the complex knots [King] had been trying to untie at the erudite Institutes on Non-violence.” Deliberate nonviolent flouting of segregation laws occurred at a time when other civil rights activists had been struggling to gain traction and helped to galvanise and build the movement.

Nonviolence may have had other benefits in this example. The radical composure of the first four protestors – who humbly occupied the lunch counter until departing – could have been what prevented the first situation from degenerating into rancour. It perhaps contributed to the rapid growth of the movement, as other students realised that they could safely take part. While many were arrested, the use of nonviolence made this a dignified, redemptive experience: “they soon re-emerged on bail to discover that their identities had not been crushed….A flood of relief swelled their enthusiasm.” Nonviolence also went hand-in-hand with the ethos of the Baptist church, which supplied activists and resources for the civil rights movement, as well as a vast network of different communities.

“Love is the central motif of nonviolence,” said Lawson at the SNCC’s founding conference, “It matches the capacity of evil to inflict suffering with an even more enduring capacity to absorb evil…”.

History isn’t a field experiment and we can’t know what might have happened without this nonviolent protest. As it happens though, these sit-ins had nonviolence at their heart and succeeded, not only in their immediate goal, but also in building a lasting organisation in the SNCC. It stands now as yet another example of the successful use of nonviolence to stand against oppression.

Taylor Branch’s account of the sit-ins clearly contrasts the earnestness and effectiveness of the students with the disdain voiced by other organisations. Branch casts King as being “alone among the established leaders of either race” in his praise of the students. The sit-ins initially drew suspicion and doubt from most quarters, including African American newspapers. They were not “approved of by the adult civil rights organizations”; the NAACP, despite having a fund for legal defense, elected not to defend the first students arrested. Editorials in Atlanta’s Daily World, written by African American C. A. Scott, praised their objective but urged them to “quit making trouble and leave things in steadier adult hands.” Suffice to say, the grown-ups were a few steps behind on this one.

This is a trend that has been observed numerous times in social movements, and named by Bill Moyer in his discussion of the four roles of activists. Moyer appreciates the role of the reformer – the NAACP certainly played an important role in the civil rights movement! – but also notes the risks of being an ineffective reformer.

Ineffective reformers will tend to disparage bold, audacious demands, in favour of incremental reform. They are at risk of limiting what change is considered realistic, and off becoming cut off from the grassroots. The reaction of the NAACP and many African American leaders to the student sit-ins highlights the pitfalls of the reformer role, and is a reminder to give fairer consideration to the variety of roles required to achieve social change.

From Greensboro to future student action

Social movements can learn much from history, from tales either of successful or unsuccessful movements (in fact, we could probably learn a lot by better studying ineffective movements). The Greensboro student sit-in is an example of an action that proved implausibly, unpredictably effective. It did this through the use of nonviolence, even while being snubbed by more established organisations that putatively supported its objectives. It’s worth noting that sometimes things are effective in ways that nobody could have seen coming and that, many times, the adults don’t know what they’re talking about.