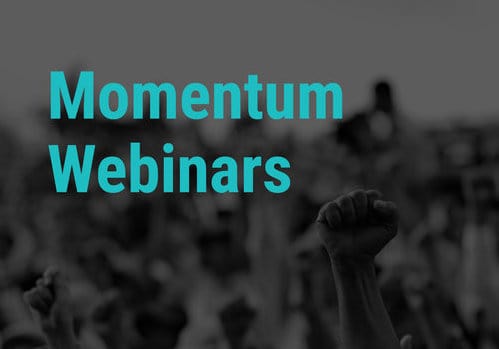 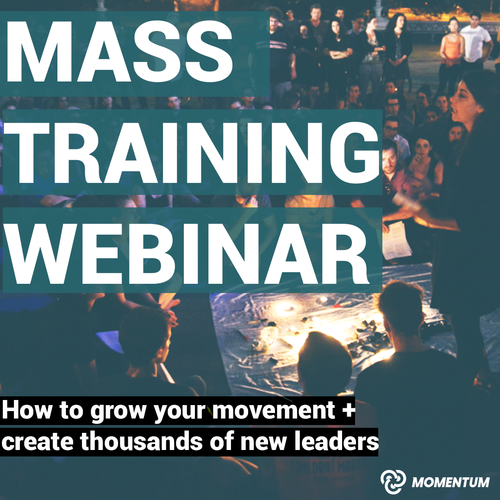 How do we remove bottlenecks and give people the skills, strategy, support and permission they need to lead? How do we give people access to transformative experience and leadership development or thousands of people without staffing up or centralizing control? How do we allow people to self-organize and act autonomously and without waiting for permission from a centralized group – without losing sight of our goal or our unified theory of change?

In this webinar, Dani Moscovitch describes IfNotNow’s mass training program, how it allowed them to bring in thousands of new volunteers in a ‘moment of the whirlwind,’ core features of how to build your own, and mistakes they made that you should avoid.

How to build the movement in a moment of the whirlwind

The Movement for Black Lives has made what many thought impossible, possible. Cities across the country are seriously considering defunding the police. Minneapolis city council members committed to disbanding the police department, a testament to the power built by BLVC and the movement. Los Angeles is cut their police budget by $100-150 million to reinvest the money in communities of color. And hundreds of thousands are taking to the streets in cities across the world to confront white supremacy inherent in our institutions and systems. We’re seeing tremendous, unprecedented opportunity before us to reimagine a world without police, where community needs are met without police violence.

This webinar with Makia Green, BLM DC core organizer and a Momentum trainer, and our Training Director Cicia Lee answers three major questions about the uprisings for Black lives this past summer:

We break down how mass protest works, how movements build momentum by using moments of crisis to spotlight issues, craft demands, reframe the fight, continue to grow and sustain, and more. 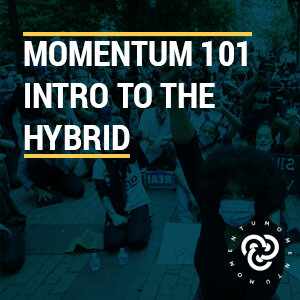 Momentum 101: Intro to the Hybrid

This video series serves as an introduction to the core concepts of the Momentum theory of organizing and is an abridged version of our larger in person training. Our curriculum is designed to give organizers the tools to build progressive popular social movements to win on the most pressing justice issues of our time, drawing on lessons and skills from contemporary and historic social movements. These recordings are from our March 2020 online training for People of Color.

The training is split into three sections: 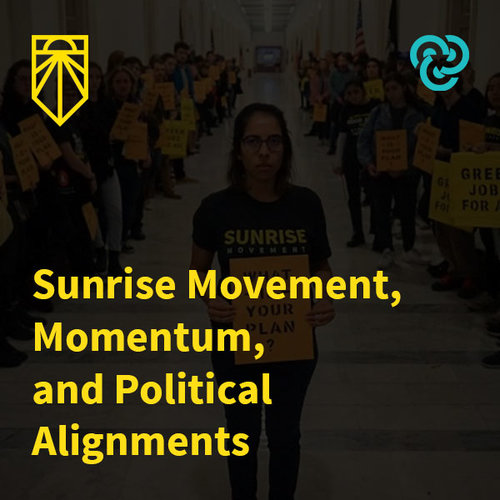 How did Sunrise study and build towards the “moment of the whirlwind” we’re seeing now around the Green New Deal? How did they use the spotlight on elected officials to build more public support and a more powerful movement? How have they learned to absorb the thousands of people who want to follow their leadership? Watch this webinar with Sunrise on their movement building lessons, and what this political moment demands of organizers around the country. Sunrise is changing what is politically possible — and is also changing what organizing looks like in this country. 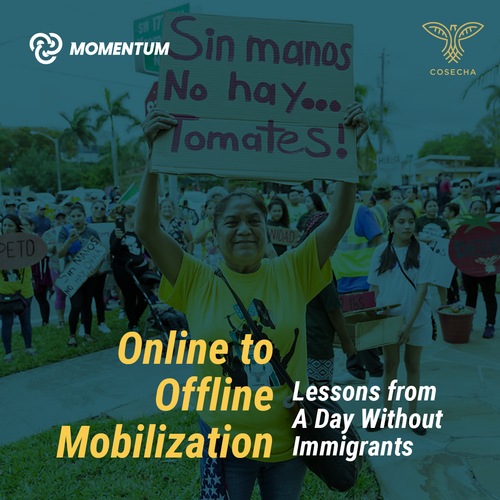 Online to Offline Mobilization: Lessons from A Day Without Immigrants

Since the 2016 election, organizations across the country have been facing a similar challenge: What do you do when thousands of people come knocking on your door, ready to take action? Learn how Thaís Marques used digital tools to recruit thousands of immigrants across the country to take part in the largest immigrant-led actions in a generation during A Day Without Immigrants on May 1, 2017. In this webinar, you’ll learn how she used innovative digital tools to engage passive supporters of the movement to turn them into active participants to grow their organizational capacity. 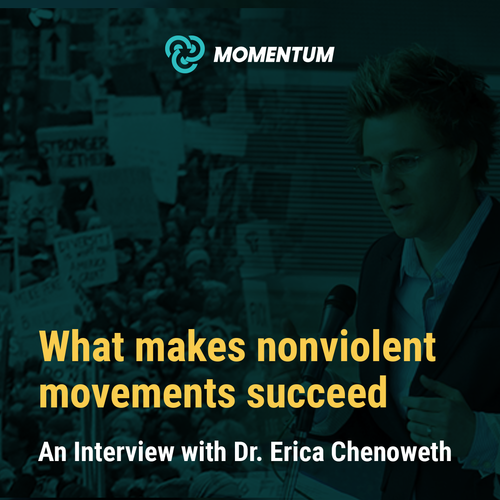 Watch this webinar for an interview with Dr. Erica Chenoweth, author of “Why Civil Resistance Works: The Strategic Logic of Nonviolent Conflict.” We asked her questions about what her research reveals are the best strategies and tactics from movements around the world that have succeeded and failed in taking on oppressive regimes. 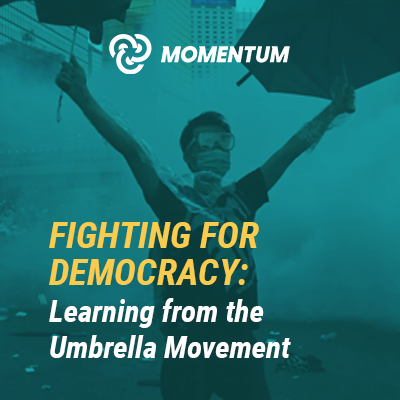 Fighting for Democracy: Learning from the Umbrella Movement

Watch this webinar with Johnson Yeung, one of the organizers behind Hong Kong’s Umbrella Movement, a massive civil resistance movement fighting for democracy. He analyzes and shares the movement cycle of the Umbrella Movement, key learnings around escalation in their 15 month campaign of civil disobedience, lessons in how they framed their issue, and how their tactics worked or didn’t work. 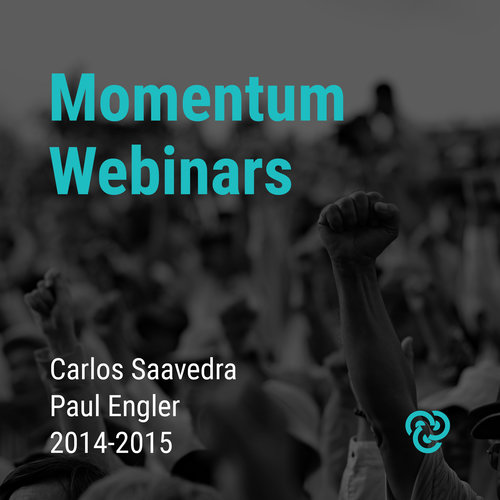 Couldn’t make it to a training? You can watch this series of 4 basic and 4 advanced webinars covering the earliest version of our curriculum. Produced in-house in the first year of our training by the Ayni Institute (formerly Movement Mastery), and led by co-founders Carlos Saavedra and Paul Engler, these videos are a great orientation to the theory of Momentum. 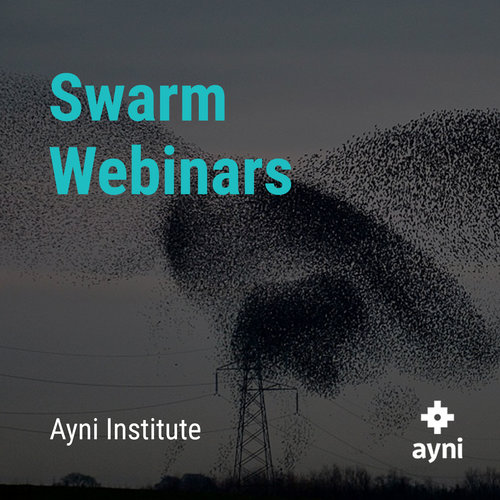 The Ayni Institute led a series of trainings that harvested lessons from a diverse range of contexts and disciplines, including biology, complex systems, network theory, and open-source software. Their Swarm Training teaches how to structure a social movement so that it maximizes the autonomy and creativity of its members while preparing for the challenges that come with decentralized leadership. They worked with participants to identify who to pull into their movements, how to create self-replicating team structures, and how to frontload principles to guide the culture and action of the movement.

For more see Momentum Community. We’re grateful to the Ayni Institute for their work to make these resources available. Check out their other trainings, and subscribe to their YouTube channel for more. Join their mailing list for access to the training powerpoints.