“This is the first truly big civil society victory in eight years. It is a huge societal breakthrough.”
– Dóra Papp, Campaign Director, aHang

Viktor Orbán isn’t used to losing. The Hungarian Prime Minister has spent the last eight years systematically stripping power from any person or institution standing in his way.

But in November 2019 Orbán’s government was forced to back down in the face of a concerted public campaign. And the Hungarian OPEN group lead the charge.

“Since the beginning, we knew the OPEN model or style of campaigning worked – but now we know it works in Hungary. And importantly, now citizens and organisations in Hungary also know it works.”
– Máté Varga, Executive Director, aHang

The environment for organising in Hungary has been starkly oppressive. Citizens were disempowered and afraid. So when aHang got to work in 2017, they knew their first job was to prove to people they still had power.

“Right after the general elections we asked ourselves and our members how to continue pushing for important change against Orbán’s supermajority. This opportunity presented itself: the issue of home care for children and adults with disabilities.”
– Máté Varga

Fast forward four months, and aHang’s members were occupying the Parliament. They’d hijacked a press conference and made it their own. Families of adults and children with disabilities, people usually cut out of political activism, were in front of the cameras. They were demanding their care be recognised as work – and paid accordingly. And behind them was a growing line of opposition Members of Parliament, standing in solidarity, ready to take their turn at the microphones.

NGOs had been advocating on the issue for years, but this campaign really kicked off when aHang helped bring together an alliance of 42 organisations. Then, utilising the full diversity of tactics used by OPEN groups, from digital ads to on-the-ground organising, aHang opened up the cause to the public. Soon, tens of thousands of Hungarians had taken digital action. And more than 200 volunteers in as many cities and towns were working alongside celebrities, public figures and MPs to put home care at the top of the public agenda.

As the campaign gathered steam, government-controlled media outlets attacked the aHang team directly. But the stories of families cut through – hitting headlines and bringing people into the streets. 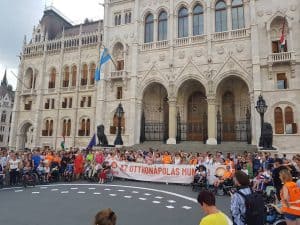 Two weeks after occupying Parliament, the activists were back, this time in the square outside. The number of affected families on board had swelled to over 200, many of them protesting for the first time. The MPs were there as well. Everyone stood in a circle and, one by one, talked about why they were there. The stories were heart-wrenching. The crowd was determined.

That was on a Friday. The next week, the announcement came: government payments to carers would increase, by as much as 200% in some instances. People power proved itself.

“This was an issue that previously was pushed under the carpet. But we won policy change for the better, by evoking the solidarity, understanding and compassion of thousands of citizens who previously had been unaware.”
– Dóra Papp, Campaign Director, aHang

The campaign isn’t over yet. While people caring for family members with disabilities will now have more government support, their work is not yet recognised as a job, a core demand of the alliance. And Hungary is still well behind its neighbours in broader support for people with disabilities.

But this partial victory has proved to the citizens of Hungary – and to their Prime Minister – that ordinary people, working together, have the power to change policy and society for the better.