Consensus is an approach to decision making which is highly valued in many activist groups and collectives.This is an excerpt from the Pt’Chang Volunteer Manual which is also available for download on the Commons.

Consensus is a nonviolent decision-making process that aims to create the best possible decision for the group. Pt’chang has used consensus for many years and found it a fast and effective way of coming to agreement. The input and ideas of all participants are gathered and synthesized to arrive at a final decision that is acceptable to all. The final decision is often not the first preference of each individual in the group, but it is a decision to which all consent because it is what is best for the group at the time. Through consensus, we are not only working to achieve better solutions, but also to promote the growth of trust and respect within the group.

In essence, consensus is a qualitative, rather than quantitative, method of decision-making. With consensus people can and should work through differences and reach a mutually satisfactory position. It is possible for one person’s insights or strongly held beliefs to sway the whole group. No ideas are lost, each member’s input is valued as part of the solution.

Reaching consensus does not assume that everyone must be in complete agreement, (a highly unlikely situation in a group of intelligent, creative individuals). Consensus is not unanimity but the reaching of a decision to which the group consents in order for the group to act.

Consensus does not mean that everyone thinks that the decision made is necessarily the best one possible, or even that they are sure it will work. What it does mean is that in coming to that decision, no one felt that her/his position on the matter was misunderstood or that it wasn’t given a proper hearing. Hopefully, everyone will think it is the best decision possible at the time; this often happens because,  when  it works, collective intelligence often comes up with better solutions than could individuals.

Consensus sometimes takes more time and skill, but utilises lots of resources before a decision is made, creates commitment to the decision and often facilitates a unique and creative decision. It gives everyone some experience with new processes of interaction and conflict resolution, which is basic but important skill-building.

For consensus to be a positive experience, it is best if the group has:

1)     common values;
2)     some skill in group process and conflict resolution, or a commitment to let these be facilitated;
3)     commitment and responsibility to the group by its members; and
4)     sufficient time for everyone to participate in the process.

During a discussion a proposal for resolution is put forward. It is amended and modified through more discussion, or withdrawn if it seems to be a dead end. During this discussion period it is important to articulate differences clearly. It is the responsibility of those who are having trouble with a proposal to put forth alternative suggestions. 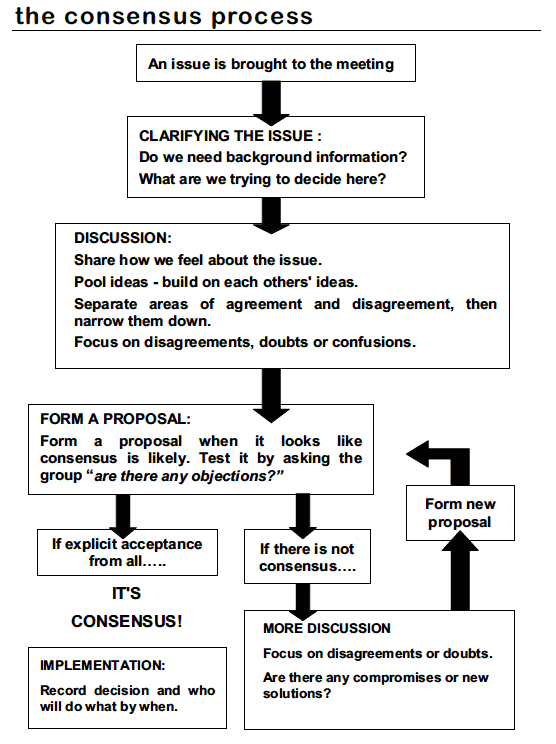 If a decision has been reached, or is on the verge of being reached that you cannot support, there are several ways to express your objections:

If a final decision violates someone’s fundamental moral or ethical values they are obligated to block consensus.

Obviously, if many people express non-support or reservations or stand aside or leave the group, it may not be a viable decision even if no one directly blocks it. This is what is known as a “lukewarm” consensus. The more important the decision, the more important it is to have a strong level of consensus.

If consensus is blocked and no new consensus can be reached, the group stays with whatever the previous decision was on the subject, or does nothing if that is applicable. Major philosophical or moral questions that will come up will have to be worked through as soon as possible.

Roles in a consensus meeting

There are several roles which, if filled, can help consensus decision-making run smoothly.

The facilitator aids the group in defining decisions that need to be made, helps them through the stages of reaching an agreement, keeps the meeting moving, focuses discussion to the point at hand, makes sure everyone has the opportunity to participate, and formulates and tests to see if consensus has been reached.

Facilitators help to direct the process of the meeting, not its content. They never make decisions for the group. If a facilitator feels too emotionally involved in an issue or discussion and cannot remain neutral in behaviour, if not in attitude, then s/he should ask someone to take over the task of facilitation for that agenda item.

A minute-taker can take notes on the meeting, especially of decisions made and means of implementation and a time-keeper keeps things going on schedule so that each agenda item can be covered in the time allotted for it (if discussion runs over the time for an item, the group may or may not decide to contract for more time to finish up).

Even though individuals take on these roles, all participants in a meeting should be aware of and involved in the issues, process, and feelings of the group, and should share their individual expertise in helping the group run smoothly and reach a decision.

Pt’chang is committed to creating an empowering and safe decision- making environment and challenging those behaviours that exclude or dominate others.

Here are some specific ways we can be responsible to others and ourselves in groups: