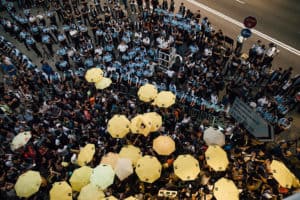 This article is a companion piece to ChangeMakers podcast Season 2 Episode 2: Umbrella Movement.

In 2014 the Hong Kong Umbrella Occupation shook the world.

The 79-day occupation of the Admiralty political and commercial district ended on 11 December 2014, with the police arresting hundreds of protesters. The massive peaceful occupation captured the international news media’s imagination, because they were so used to covering violent scenes of carnage, bloodshed, rape and slaughter. Some journalists described it as the Umbrella Revolution, and it could not be further from the truth.

In the first few weeks of the occupation, many people flocked to Admiralty to offer their support to the peaceful demonstrators, which consisted mainly of young people who were exasperated with the Central government in Beijing’s refusal to allow the people of the Hong Kong Special Administrative Region (HKSAR) to conduct democratic elections. However the occupation failed to move the powers that be and many people felt disheartened and frustrated.

Four years later today, elections by universal suffrage is still a distant dream. The political environment has deteriorated rapidly under the watch of HKSAR Chief Executive Carrie Lam, who said Chinese President Xi Jinping is the world’s most charismatic leader and she did not mind people criticising her for “shoe shining”.

With the rising level of intolerance to free expression, self-censorship among the news media, academics, social activists and professionals is the order of the day. Pro-democracy lawmakers have been thrown out of the Legislative Council and activists have been barred from standing for election. This was the result of decision by the National People’s Congress Standing Committee to interpret the Basic Law, which is the HKSAR’s mini constitution, and such decisions are binding on Hong Kong courts, including the Court of Final Appeal. Such act by Beijing has seriously undermined the Central Government’s policy of One-country, two-systems and seriously threatened the HKSAR’s high degree of autonomy and the rule of law, which underpins the Hong Kong people’s freedoms and personal safety.

Looking back to Umbrella movement, there is no doubt it has captivated and inspired many young people to embrace the quest for democracy and social justice. Although it ended with the arrest of activists, the Hong Kong people’s desire for democracy and freedom would not be snuffed out. Such large scale occupation may not take place again in the near future, but the people will definitely take to the streets again and again to defend their freedom and personal safety, and to fight for democracy and the rule of law.

Emily Lau Wai-hing, JP is a politician in Hong Kong who champions press freedom and human rights. A former journalist, she became the first woman directly elected to the Legislative Council of Hong Kong in the 1991 election.