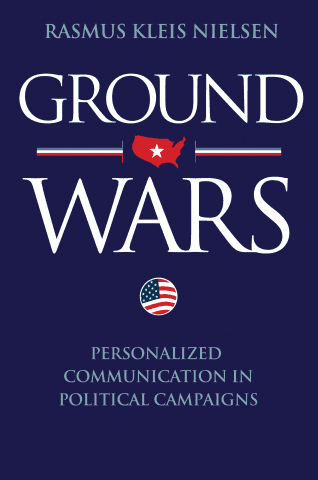 First, targeting. Specialists draw upon voter records outlining who is registered and how frequently they’ve voted, combining it with commercially-available information about consumer behaviour. Each voter has been assigned a unique ID so their information can be updated over time even as they move house or change phone number. This information is enriched by tens of thousands of voter contacts in past campaigns, indicating the stated preferences of contacted voters. Using this information, campaigns can predict with 80% accuracy whether somebody will be in one of the two crucial population subsets: undecided voters, and infrequently-voting partisans. The other groups are simply irrelevant to the campaign, and the opportunity cost of reaching them is unaffordable.

Until the campaign’s final days, only the undecided voters are contacted. They might get a phone call from a volunteer in a field office, or get doorknocked (‘canvassed’) by a part-timer paid $10 an hour. The script is formulaic and focused on voter ID. If somebody gets a call they will get asked if they support the candidate. If they do, they still get a bunch of further ID questions, but they won’t get called again. But if they are marked “undecided” they are unwittingly thrust into the wardrobe and will be subjected to a barrage of further contacts over coming months. Although, the first phone call would limit itself to a single, wholly-scripted, attempt at persuasion (and further ID).

In the final days, infrequently-voting partisans become the focus, with an all-out field effort aiming to get out the vote and mobilise the party’s faithful-yet-lazy. Sociologists estimate that fourteen contacts at the door turn out one more voter. As a rule of thumb, three contacts can happen in an hour. Campaigns invest hundreds of thousands of hours accordingly.

The reality is less neat, of course. While staffers need to to get people doing instrumentally useful things, most volunteers desire “to be part of something”. Volunteers don’t want to be smoothly rotating cogs in a machine, obedient and replaceable. They have their own motivations, they have their own agendas. They are sceptical of claims about the efficacy of phonebanking and canvassing. Every rejection at the doors or on the phones hurts, and saps their motivation. They don’t like following scripts, they’re unsure about how long to spend on a contact, the targeting is opaque to them. They resent that staffers don’t spend time talking to voters themselves.

Wars on the ground

This is the picture painted by Rasmus Kleis Nielsen in Ground Wars: Personalized Communication in Political Campaigns. Ground Wars is his hands-on ethnographic study of two competitive congressional campaigns in the 2008 US election. Rasmus spent ten months from February to November 2008 as a “participant-observer”, volunteering in field campaigns, maintaining a research diary, and, for example, considering the links between personalised political communication and the work of sociologist Erving Goffman. Ground Wars is the result of that study, a richly-detailed portrait of not just two campaigns, but of the face of contemporary field campaigning.

Much of what Nielsen portrays is outlined above – the nuts-and-bolts reality of what happens in a field campaign. But there is also much that goes beyond this. While his book isn’t a how-to guide for running a field campaign, it is a wealth of context and insight for understanding both the dynamics of modern campaigning and the psycho-social currents underneath a campaign assemblage.

That is, it has the potential to ready the reader for the reality of field campaigning – and not just at the “expect to go doorknocking” level. Having spent six months on a field campaign myself, I recognised much of what Nielsen showed, and could see how useful it would have been to have understood it beforehand.

Mostly, it is to do with the organisations and hierarchies that are typical of modern campaigns. Nielsen frames campaigns as “campaign assemblages”, ad hoc amalgamations of the “campaign organisation” comprised of staffers, the “network of allies” in sympathetic organisations, and the corps of volunteers and paid part-timers. Nielsen explicitly contrasts this with a once-dominant model of campaigning, whereby the campaign is executed by the party and its faithful, as opposed to a temporary assembly of many actors with many distinct motivations. Nielsen explores the realities and difficulties of this model. While the campaign organisation is “hierarchical” and “temporary”, network allies are “recurrent” and concerned with a longer-term agenda, all interaction with them is by “negotiation”. With regard to the volunteers, Nielsen describes “friction at the interface”, noting staffers’ “ambivalent relations” and the challenges of “very different communities”.

Ground Wars also had some surprises for me. I hadn’t realised the extent to which US field campaigning is fixated upon voter-ID. Nielsen argues that a focus on quantity of calls and knocks meant that canvassers or phonebankers would be wondering about ending the contact “as soon as it is made“. That is, the moment the door opens and a conversation begins, the canvasser is thinking about moving on. In contrast, in the “Simon Sheikh for the Senate” campaign we were interested in deducing voting preferences – but also achieving persuasion through unscripted deeper conversations. Perhaps we were on the money – more leisurely conversations are apparently more effective than shorter and scripted ones.[1] Another surprise was how little training volunteers got in the campaigns Nielsen studied. Paid part-timers would be sent in the field with barely a script and a map, volunteers too. In the case where the interaction is highly-scripted and doorknocking much more ‘normal’ this is perhaps not as outlandish as it sounds, and it happens in a context in which staffers are desperately trying to meet voter contact goals. My experience in Australia is that, with the expectation of deeper interactions and volunteers less comfortable with doorknocking, much more training was necessary, to build both skills and confidence.

On reflection, I trust Ground Wars because of how uncannily Nielsen’s work parallels my own, and how his scholarly eye reveals details of my own experience hitherto invisible to me. Nielsen enriches his work with “episodes”, narrative fragments of incidents from the campaign, and many of these had me smiling knowingly to myself. (“Policy work? Geez, that’s like five minutes every week. Don’t they realize that what we need is phone calls?”) His sketch of a diverse congregation with common yet differentiated interests, contacting voters in a frenzy, and influenced by the realities of human frailty – impatience, ambivalence, selfishness – spoke to me.

I loved working on a field campaign for a federal election, I hope to do so again, and I want many more to do so. So I appreciate what Rasmus Kleis Nielsen is doing with Ground Wars. While the work is certainly not an illustration of how campaigns should be run, it depicts with thousands of fine brushstrokes how campaigns are run. It won’t teach you how to be a great doorknocker, or how to run a call centre. But if you have any interest in field campaigning, if you perhaps have thought of playing a role in a campaign assemblage, you should read this book. More than anything else, it will prepare you for the day-to-day of a campaign, the personalities, the peccadilloes, and, of course, the politics.