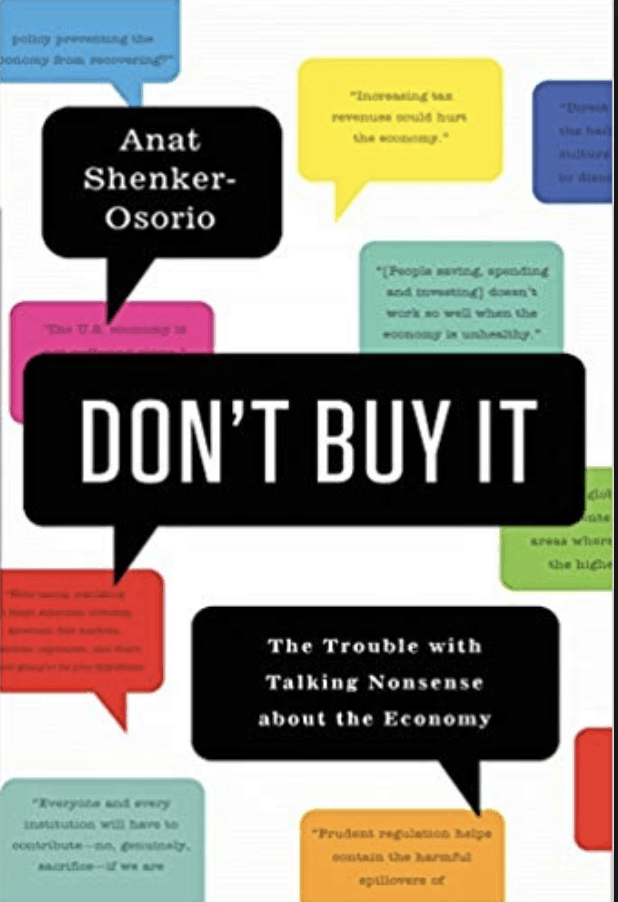 A book review of Don’t Buy It by Anat Shenker-Osorio.

Anat Shenker-Osorio, author of Don’t Buy It, was the darling of Progress 2013. During her keynote on messaging, the crowd was hanging off her every accented word. She later did a break-out session which was standing room only. The crowd was delighted by her pithy, witty advice, as well as the presence of her two rather cute children. Come Christmas, someone bought her book for me. Just now, I read it.

Don’t Buy It is a guide to progressive messaging on the economy and economics. It begins by asking what progressives believe about the economy and want to communicate, before discussing the range of metaphors available for this purpose. Having argued for her preferred metaphors, Shenker-Osorio then advises on messaging around inequality and wages, helping progressives to use metaphors and other devices to maximum effect. Because limits, more so of attention spans than words, in this post I’ll review solely her discussion around the economy.

We hold these (economic) truths to be self-evident

The range of available metaphors can then be evaluated with reference to how they communicate (or obfuscate) these messages. A similar approach could be taken on other issues.

Being economic with metaphors

The economy is an abstract concept. It’s not something we can directly measure or observe, which is why we have things like GDP, unemployment rates, and inflation rates, to help us make sense of this abstraction.

Human brains employ other means to make sense of abstractions: unconscious comparison. Our brains make sense of abstract or complex things in terms of tangible, simpler things. This is “conceptual metaphor”, “the unconscious and automatic process of comparing an abstract notion to another more concrete entity in order to make better sense of it.” While we often think of metaphor as something we start using in high-school poetry classes, it is in fact fundamental to how we make sense of otherwise incomprehensible phenomena: life (a journey: “the last mile”) , love (an ailment: “I’ve got it bad”), Tinder (an acceptable complement to actual relationships).

In the case of the economy, numerous conceptual metaphors exist. Shenker is pretty clear on her favourites (on which more detail below), but four others of understanding the economy are:

While the structure and crop two metaphors have promise, Shenker-Osorio recommends two other options as more established and more consistent with a progressive understanding of the economy. These are:

In conjunction, these metaphors amount to: ‘the economy is a vehicle to facilitate a journey’. Regarding the economy, this conveys both the what (an artificial object requiring external direction) and the why (to get someplace). Shenker-Osorio argues that these metaphors most naturally communicate the progressive worldview and lay a foundation for progressive policy objectives: “[if] wealth and income inequality results from leaving folks off the vehicle that propels society forward, it becomes much harder to think of the poor as lazy, unmotivated, and undeserving of financial reward. Addressing equality no longer seems like offering a handout; it’s a matter of simply giving everyone a seat on the bus.” This model makes it clearer that the economy is here to serve our interest, not the other way around. It makes human beings primary, and the economy secondary, as a means of serving human interests. Further, it gives rise to the attitudes and concomitant policies that progressives favour.

Metaphors are powerful and shouldn’t be neglected. The piloted vehicle metaphor for the economy presupposes certain conditions, while making other contentions (that it is homeostatic; that it doesn’t require intervention) unthinkable. Considering Shenker-Osorio’s five-point wishlist above, this metaphor could be used for each point:

The right metaphor makes your view seem obvious and natural, while making it harder to think of opposing views. So much so, that metaphors can influence policy preference more than partisan persuasion [1]. Speaking of the economy as a vehicle with a destination communicates a role for government and human-oriented objective of the economy. Metaphors matter.

Metaphors aren’t just a neat trick to make people believe things. In excellent political communication, the consistent use of certain metaphors creates an extended metaphor — a narrative — that communicates a coherent and compelling story.

Conservatives have succeeded in doing this with the economy. In their extended metaphor, the economy is an arbiter of good and bad. Conservatives describe the economy in these terms not just because it’s effective for their goals but because it’s actually how they understand the economy. Economic success is a reward for not just industry, but goodness, while there is no such thing as economic ‘misfortune’: if you’re poor, it’s because you don’t work hard enough, or do bad things. “In this view,” writes Shenker-Osorio, “taxation is not the collective pooling of resources to pay for what the group needs. It’s a form of punishment — and makes little sense if you believe the purpose of the economy is to reward and encourage “good” behaviour while disincentiviz-ing and curbing “bad” behaviour.”

Absolutely, the conservative priority is not creating wealth, nor reducing spending. It’s making sure that the rich get what they deserve (wealth), and the poor what they deserve (privation). The fact that this is a touch self-perpetuating doesn’t seem to matter. Understanding this narrative is crucial to understanding conservative policy. It explains why economic arguments against offshore detention don’t matter (because moral order is more important) and why taxation is wrong (because it’s punishing people not, as such, for doing well but for doing good.)

Myself, this worldview makes me recoil in disgust. It is fundamental to a progressive worldview that economic circumstances aren’t a reflection of personal values, that luck plays a big role, and, further, that many people are doing poorly not just because of bad luck but because they weren’t allowed on the bus in the first place [2]. So there is value in understanding this view, admiring its internal coherency, and then rejecting it utterly.

Start from the heart

After discussing metaphors for the economy, Shenkers-Osorio covers much more terrain: how we should frame the global financial crisis, inequality, and wages; how to phrase messages more effectively; ideas for what we could campaign for. Rather than treat such material here, I encourage you to get and read her book — she expresses herself much better than I could paraphrase her.

Shenkers-Osorio ends Don’t Buy It by urging progressives to actually say what they believe, to stop trying to win over the middle-ground by using the insidious metaphors and values of the opposition. She acknowledges that this isn’t exactly a new idea, but points out that progressives have a long way to go in applying out. We shouldn’t “meet people where they are”, she says, “if that place is destructive.” Instead we should “sing our fight songs and never mind about pissing off those who disagree with us.” Conservatives, don’t meet people where they are. Rather, “they plant a flag where they’d like people to go and start a march there, without food or water, no matter the distance.”

This lesson seems particularly relevant in the context of a Tony Abbott Government, when you have Cory Bernadi publishing yet more frothing right-wing testaments, the Attorney General affirming the right to be a bigot, and a Commission of Audit recommending that we tear-up the social contract and go back to the feudal system. The right don’t just use metaphors: they say what they believe, they say it ferociously and repetitive, and they make it become truth.

Thus, Shenker-Osorio’s greatest contribution in Don’t Buy It isn’t just telling progressives how to communicate what we believe — it’s telling us to communicate what we believe. Yes, she shows that speaking about the economy as a vehicle helps us to explain the role of Government and the importance of equality. But she also asks us to consider our fundamental beliefs about the role of the economy and its relationship to society. “It’s time,” she concludes, “to get on metaphor and boldly describe the world we seek to inhabit with an economy working for all of us as a key component of it.” Ladies and Gentlemen — start your engines.

[1] Paul Thibodea and Lera Boroditsky, “Metaphors We Think With: The Role of Metaphor in Reasoning,” PLoS One, February 23 2011.

[2] In fact, a correlation has been established between belief that luck determines income, and social spending as a proportion of GDP. Alberto Alesina and George-Marios Angeletos, “Fairness and Distribution: US vs. Europe,” Working Paper №02–37 (Cambridge, MA: Institute for Economic Research, Harvard University, 2003).