Campaign Planning: How to Get Started

What is a campaign? and how do you start one? Here are ideas, steps and handouts from Campaign Bootcamp UK to help you get started with your campaign planning.

What is a Campaign, and How to Start One

The most common question I hear is “am I a campaigner?”. There are loads of different words for what a campaigner is, some people say activist, changemaker, protestor, community leader, community organiser or troublemaker.

I think of a campaigner as anyone who sees something that they want to change in the world and goes about trying to do that.

Most people campaign in their free time, some are lucky enough to have it as part of their job, but that’s very rare.

To be a campaigner you don’t need to have lots of cash, make lots of speeches, be a whizz with computers, or be the most confident person around — all you really need is to want to change something.

So if you’re reading this you probably are already a campaigner. You’re in good company! All over the world, every single day, people are campaigning for things they believe in. Throughout history some of the biggest changes we’ve seen have been brought about by a small group of passionate people working together to bring about change.

What is a campaign?

The second question I normally get is “ok, so what is a campaign”. This is a super important question – lots of people waste a lot of time doing activities that aren’t actually a campaign.

So what is a campaign? Put simply a campaign is when a group of people work together in an organised and active way towards a goal.

Our friends at 350.org describe it really well in a bit more detail:

Groups often waste precious energy on an endless series of educational events or actions that don’t seem to add up to anything. In contrast, campaigns channel group power by focusing on a concrete goal.

Campaigns are sustained efforts toward a specific outcome. For instance stopping a coal power plant, or forcing the government to create a climate change impact study. Campaigns are a powerful way of strategically building group capacity and developing experience. At the same time, campaigns win solid victories for social justice.

Campaigns are different than efforts that just focus on the problems of society. Campaigns identify a piece of what we want and work toward achieving it. Having such a goal strengthens educational events, outreach, and protests.

Campaigns are different than one-time protests. One-time protests, like a large divestment day, can raise people’s awareness. But the power of a campaign is that after an action is over and people ask “how can we help make change?” we offer specific actions for them to take.

Campaigns inspire people to take further action, in addition to helping them understand the depth of the problem—and this all adds up to real change.
From “What is a Campaign” by 350.org.

Why do we campaign?

Campaigning is one of the key ways that change happens today – because they help people tell the powerful that something is going wrong, and get them to fix it.

Campaigning has been a core part of holding the powerful to account, and changing the way our society works, for centuries. Some of the biggest injustices, like the Hillsborough Disaster, have only been confronted because some people came together to form a campaign for justice.

OK – I’m in. How do I plan an effective campaign?

OK great! Now that that’s all cleared up let’s get into the exciting bit — the rest of the guide will focus on how you can plan a really effective campaign.

The most important thing with a campaign is that you start! Many campaigns have won with little, or no plan.

People often call a campaign plan a “campaign strategy”. Plans don’t have to be complicated or long, they’re really there to help everyone involved with a campaign to work together, in an organised way to make change happen.

However, from seeing hundreds of campaigns happen I’ve put together some key steps below that should help you plan a successful campaign.

The Three Steps to a Great Campaign

The most important thing with a campaign is that you start!

Many campaigns have won with little, or no plan. However, from seeing hundreds of campaigns happen I’ve seen three steps that’ll help you win. Here they are:

Step 1 – Getting ready to campaign!

A – Figure out your campaign goal – the big change you want to see
At the start of any campaign will be a problem – the thing you’re trying to fix.

B – Do some research to check you’ve got the facts right & make sure you can win any arguments that might happen as you campaign.

The best place to start is Google and your local library. Here are some key questions you may want to look into:

It maybe that you need to do some of your own original research to get vital information, for example standing outside the local shop asking passers by a quick questionnaire about the potential impact of closing the local Children’s Centre.

C – Set some objectives. Objectives are specific things you can do to achieve your goal.

It’s good to aim to set no more than a couple of objectives at a time. One objective at a time is fine! If possible try to make them specific and measurable. If we take the street homeless campaign goal I mentioned earlier (i.e. quality of life for homeless people in our town is improved) an objective could be “Increase the number of emergency beds for homeless people in our town by 30%’ ”

Other objectives could include:

Deciding your campaign objective/s will force you to be much more specific about what it is you’re trying to achieve. Now you’re clearer you may need to go back and do a little more research for example to be clear about who your campaign target is.

A – Figure out how to influence your campaign target

Great! You’ve done some research, set an objective and have some idea who your supporters are, who is talking about the issue, who is against you and who your campaign target should be. Don’t worry if you’re not quite clear yet, this can be complicated business.

Now you need to figure out who has the power to influence your campaign target. The best way to do this is to get some post-its (or just some pieces of paper) and list on each one all the people or organisations who might have power to make change happen (including who you think might be your campaign target). Going back to the objective from our homeless campaign, we would list all the people and organisations that we think have the power to increase the number of emergency beds for homeless people in our town

Then draw your own version of the “power map”  you can find here.

Great! Now you need to place the post its on the two axes of the Power Map.

Ideally you want 5-20 things on the map. If you’re struggling, think about local, family, political or work ties.

Once it’s done talk to the people you’re working with to figure out if you need to rethink your objectives, or campaign target.

B – Pick your tactics.

OK great! Now you get to focus on the fun bit – picking the things you’ll do to make change happen — the tactics.

One of the biggest mistakes people make when campaigning is to start by picking your tactics, before figuring out the problem, goal and objectives. The problem with this is you’ll often waste lots of your time and energy, by doing a tactic that isn’t linked to fixing the problem you care about.

Tactics can be anything from starting a petition, holding a demonstration, organising a meeting or getting the campaign in your local newspaper.

The best way to pick your tactics is by figuring out which tactics help to achieve your objective. Here’s an example:

Objective: “A road crossing should be built outside school”

There are a huge number of tactics you could use. Some of the most popular ones are:

There are so many tactics, you shouldn’t aim to use them all! You should look for tactics that help you achieve your objectives and stay focussed on that. It’s fine to change tactic – if you’ve tried them and they don’t work. But whatever you do don’t overstretch yourself by doing loads of tactics all at once. 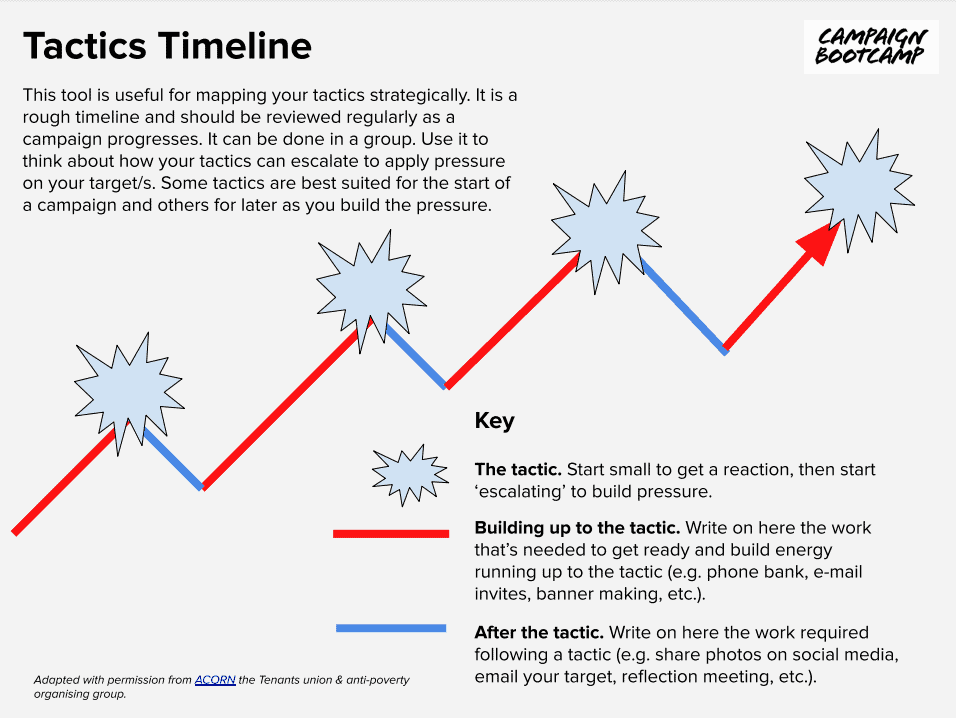 To help use a Tactics Timeline –  This tool is useful for mapping your tactics strategically. It is a rough timeline and should be reviewed regularly as a campaign progresses.

C. Spreading the word – so you have lots of supporters who will help you win!

Campaigns are never won by one person working alone.

To win your campaign you’ll need to bring together a group of people who work with you to plan your campaign, and then attract some campaign supporters.

Supporters are important – as they’ll show your campaign target that this is a problem lots of people care about. This not only gives you more power – but also means that you don’t have all the pressure on yourself.

The foundation of many campaigns is a petition. They allow you to explain to the world what you’re doing, and they allow the public to show their support quickly and easily. Ultimately petitions are about building and showing your power — by showing how many people care about your campaign.

But always remember that a petition alone is not a campaign. A campaign should build over time using a variety of tactics — with a petition as one of them.

It’s best to start a petition online, as you can get lots of supporters quickly, and if you choose a good petition platform you can message your supporters and tell them all about your campaign as it grows stronger. To build a petition you’ve got some choices. In the UK there are four key platforms for you to consider:

Once your online petition is up and running it’s a good idea to also collect signatures on paper, at events you might run or other places where lots of people gather

One of the key decisions a campaign target will make is “can I ignore this campaign?”. When most campaigns start they’ll look at what you’re doing and think “yes, I can ignore this, it’s not a big deal”.

The best way to do this is to plan to gradually escalate your campaign over time, by figuring out a series of tactics which will help you achieve your objectives over a number of months. The Escalation Guide from Fossil Free Europe has great examples of how this might work.

B – Finally, look after your physical and mental health.

It’s very hard to campaign on things that matter a lot to you, it can be exhausting and make managing your mental and physical health rough. Campaigns are successful because they are sustained and build pressure over time. So as you plan your campaign it’s important to look after your own and , each others mental health, so you can keep campaigning for as long as it takes.

There are lots of resources out there to help you think about this.

Here are handouts to help you get started with your campaign planning. A 3 page handout about the basics of campaign strategy. 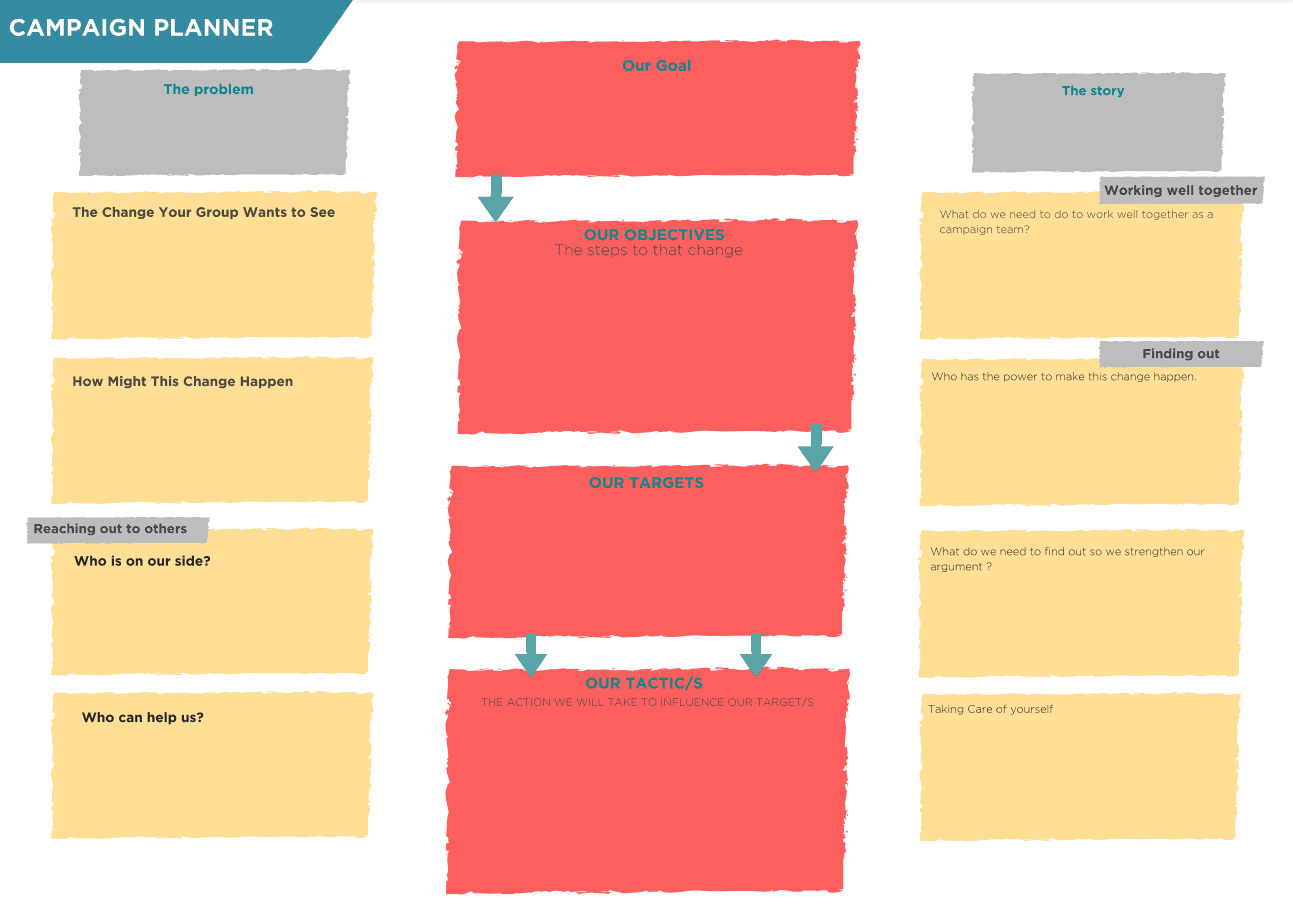 This handout allows participants to map out their entire campaign – including the goals, tactics, objectives, and the story that goes alongside it.

Elements of a Campaign 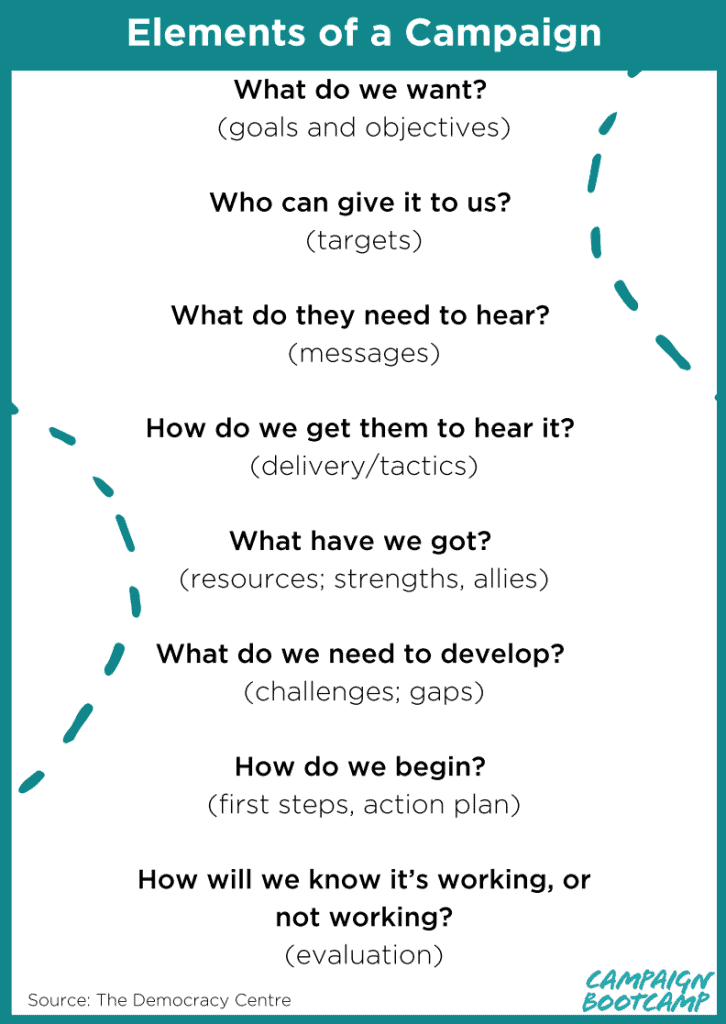 What do we want? Who can give it to us? This handout will help you to identify the different elements of campaign planning. 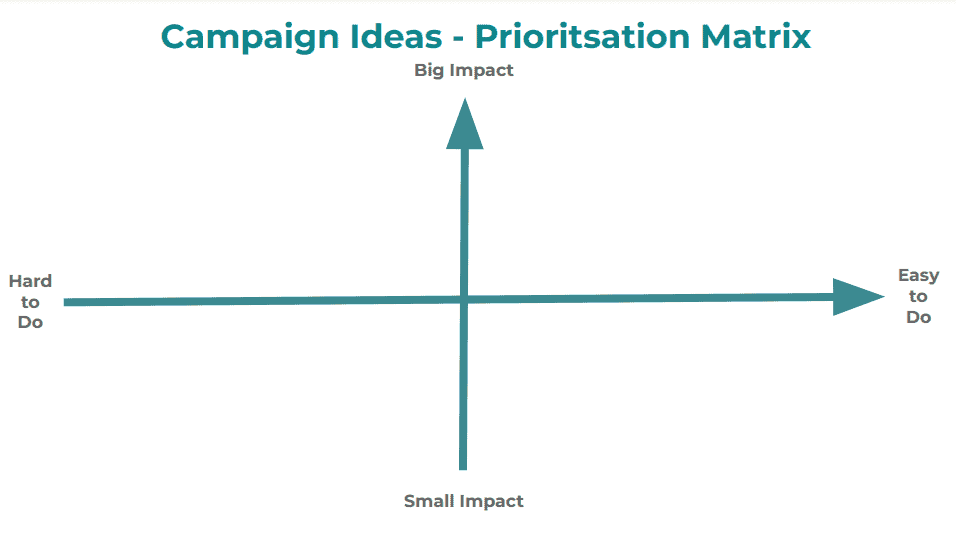 This handout will help you to prioritise your campaigning ideas, weighing up impact and how easy it is to do