Where’s the Power? Developing Your Theory of Change [Template]

The information below has been adapted from Organizing Workshop Participant Guides based on  the works of Marshall Ganz of Harvard University and adapted by others.

A theory of change statement uses this format:

If we do (TACTICS) then (STRATEGIC GOAL or CHANGE) Because (REASON)

Theory of change statements should be clear for both the big and small picture (e.g. large scale on a national level, or small scale at the local level in electoral organizing).

Your theory of change is your hypothesis about how to organize your constituents’ resources to affect those who hold the resources/power to solve the problem.

In the Montgomery Bus Boycott example, the theory of change could be written like this:

In a Canadian federal election, a theory of change could be written like this:

Figuring out how to achieve a strategic goal – or even what goal is worth trying to achieve – requires developing a theory of change.

We all make assumptions about how change happens. Some people think that sharing information widely enough (or “raise awareness”) about a problem will change things. Others contend that if we just get all the “stakeholders” into the same room and talk with each others we’ll discover that we have more in common than that separates us and that will solve the problem. Still others think we just need to be smarter about figuring out the solution.

Community organizers focus on the community, their constituency, because they believe that unless the community itself develops its own capacity to solve the problem, it won’t remain solved. Another word for “capacity” is “power” or, as Dr. King defined it “the ability to achieve purpose.”

Power grows out of the influence that we can have on each other. If your interest in my resources is greater than my interest in your resources, I get some power over you – so I can use your resources for my purposes. On the other hand, if we have an equal interest in each other’s resources we can collaborate to create more power with each other to bring more capacity to bear on achieving our purposes than we can alone.

So the question is how to proactively organize our resources to shift the power enough to win the change we want, building our capacity to win more over time?

Since power is a kind of relationship, tracking it down requires asking four questions:

IF we do this, THEN that will likely happen. Test this out with a series of “If-Then” sentences.

Once you are satisfied you are ready to articulate your organizing sentence: “We are organizing WHO to achieve WHAT (goal) by HOW (theory of change) to achieve what CHANGE ” 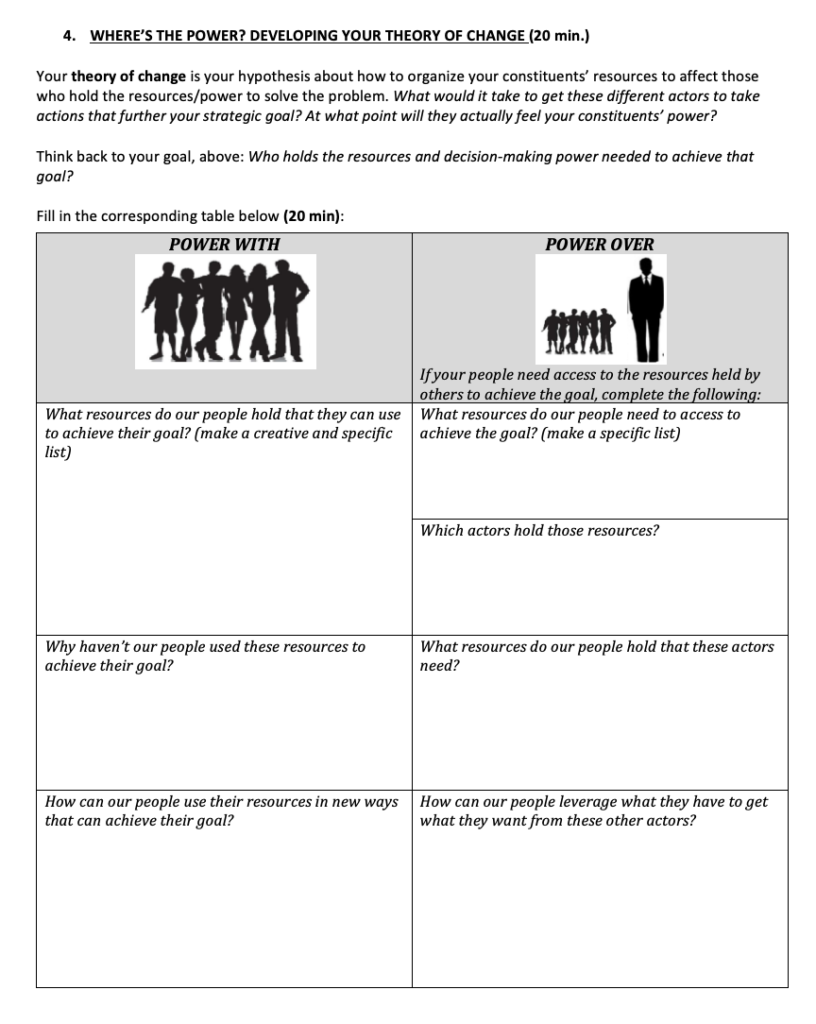