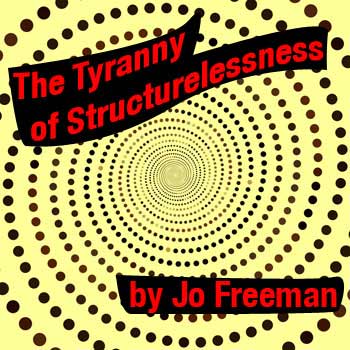 A review of Jo Freeman’s “The Tyranny of Structurelessness”.

Groups are fascinating things. Sometimes you’re in a group and everything seems to go so well, it’s almost like magic. Other times – much more often, I fear – groups are a burden. Communication is poor, decision-making is chaotic, and things aren’t getting done.

Jo Freeman’s “The Tyranny of Structurelessness” is a 1970 paper that explores some of the structural problems facing groups. She draws her argument from the women’s movement and aims it at the same audience, but her insights are relevant to all groups. Do read her excellent original piece, because I would feel somewhat patriarchal if I thought I was doing the world a service simply by regurgitating her work. Rather I’ll do a brief summary here – hopefully enough to get you to read her paper – and consider what has resonated with me.

Freeman argues that the existence of elites is inevitable in groups. She defines an elite as “a small group of people who have power over a larger group of which they are part, usually without direct responsibility to that larger group, and often without their knowledge or consent.” Such elites form because groups will have members who are friends and thus have informal networks for communication and decision-making that exist outside of the group’s formal structures. Inevitably, and quite defensibly, friends who are in the same group will discuss the work of that group and their ideas about it, and this means that they have more power than the other members of the group:

“Because people are friends, because they usually share the same values and orientations, because they talk to each other socially and consult with each other when common decisions have to be made, the people involved in these networks have more power in the group than those who don’t.”

Informal structures are not, writes Freeman, “inevitably bad — merely inevitable.” But there are risks. Decisions can end up reflecting the will of the elite, not the whole group. Too, decisions may be made on the basis of friendship or connection, not competence, dedication, talents or potential contribution.

Accepting this inevitability, Freeman proposes that the best response to inevitable elites is to create formal structures which are a counterbalance to informal structures and create avenues for involvement for those who don’t have access to the informal structures. By handing more power to regular group members, this also makes elites more accountable to the entire group. Indeed,

“In a Structured group, two or more such [informally structured] friendship networks usually compete with each other for formal power. This is often the healthiest situation, as the other members are in a position to arbitrate….”

So elites are inevitable, because friends will get involved together and communicate with each other outside formal channels. This can have negative consequences. The best response is formal structures. In particular, these structures should make sure that tasks, information, and resources are widely shared in the group. The same people shouldn’t keep doing the same things, everyone should know the same public information, and people should have access to the same resources.

Phew! So that’s the bulk of it.

Why I love it so much

“they listen more attentively [to each other], and interrupt less; they repeat each other’s points and give in amiable; they tend to ignore or grapple with the “outs” whose approval is not necessary for making a decision.”

In this case, formal structures existed but they weren’t strong, and the elite began to undermine their efficacy. This further weakened the formal structures and resulted in the elite having more power. Eventually the elite can exercise a great deal of control over the group, even if not explicitly. It is very nice to be friends with everyone in your group. But it probably means that some talented non-friends are not getting involved.

On a more positive note, this paper made me appreciate many of the processes of the ACT Greens. The ACT Greens have a fortnightly bulletin going to all members, ensuring that members of the group have information allowing them to exercise opportunities for collaboration and decision-making. Processes exist for assuming authority within the group as well as for holding such power-holders to account. While it’s inevitable that the ACT Greens branch hosts a number of social networks, each a different elite in its own right, the strongly structured formal channels give members power to know what is going on and take part in decision-making, regardless of their participation in such elites. Moreover, Freeman’s paper has made me consider how such structures could be further improved: possibly there could be more accessible information about the different groups that exist and how to join them, reducing the dependence on informal or ad-hoc channels for the flow of such information.

Most of the people I know, if they are in groups, will be in elites within those groups. Like me, they’ll have the extra time to develop social ties in their groups, inevitably and understandably increasing the power of their social group relative to a newcomer. This is not necessarily a problem.

The problem is when there is only informal structure and there aren’t formal structures to make sure that the “outs” have access to the same information and authority as the “ins”. Can “outs” find out when meetings are, when decisions are being made? Are decisions debated more outside meetings than in? Is it easy for someone who isn’t socially connected to know how they can be involved?

Freeman’s “The Tyranny of Structurelessness” was a call to the women’s movement as it transitioned from consciousness-raising to a desire to design and execute a political agenda. Effective strategy, effective groups, weren’t possible without effective structure. For those of us who’ve found ourselves outside looking in, it’s easy to see the benefits of formal structure.

But for those of us on the inside, it’s trickier to see the advantages of reducing our own power as we make it more possible for others – maybe busy, maybe introverted, maybe just different from ourselves – to join us in the important work we do. Yet it is the only way that our groups and those we seek to represent can have full control over their own direction.