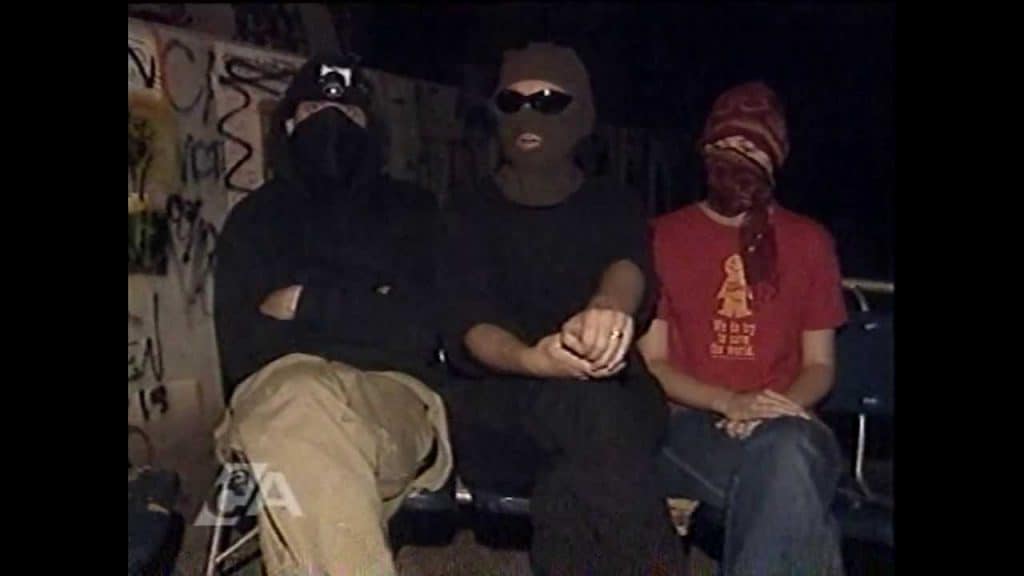 Members of the Dole Army on A Current Affair, 2002.

In 2014 there was yet another round of attacks on the welfare system. In response the Melbourne Campaigners’ Network held an event on Anti-Poverty Organising in Australia to gather insights from the history of unemployed activism. It was a well attended energising and inspiring discussion.

The night included an overview of the history of Australia’s welfare system, followed by oral history from Annie Nash (sharing stories from the 1980s) and Luke McMahon (talking about his involvement in the Dole Army in the 90s and early 2000s).

We kicked off with excerpts from Jim Munro’s eyewitness history of the unemployed workers movement in the 1920s and 30s. Jim described the situation facing the unemployed before the federal government started providing benefits in 1945:

For thousands of people out of work there was no assistance of any kind except through the Ladies Benevolent Society. They were a voluntary organisation that existed in practically every suburb and was made up of middle class women, good meaning women a lot of them, some of them not so good meaning because their husbands owned butcher shops or groceries and they were concerned with getting orders for relief diverted to their husband’s business. If you were that desperate that you had to apply for assistance then they would come into your home and they’d go through it and say “Oh yes you need assistance, but you’re not up against it as yet, you’ve got a piano there you don’t need, you’ve got more chairs than you require in the house, you sell those things and we’ll come back in a fortnight’s time.” So they would make you sell up things that were in your home till you were cut down to the bare minimum and then they would provide assistance. When you got assistance it would be docket written out to go to such and such a grocer and get a basic amount of groceries and so forth. They weren’t the only ones on the rating, there were other religious groups too. That was the only assistance there was.

In this excerpt there are examples of welfare approaches still in play today – income management (or welfare quarantining, providing food rather than cash to be spent at the receiver’s discretion) and assets testing (pushing people to use their savings or liquefy assets before providing any relief).

Jim described some of the actions of the unemployed workers movement:

Things weren’t going too well so the Government decided to cut out the sustenance. Instead of getting an order to use at the Grocer you got a sugar bag, a 70 pound hessian bag, with groceries in it. Well we objected. The first day we refused to accept them. We held meetings to clear the flak, picketed the place and wouldn’t let anyone in. So nobody got sustenance that week. The same thing happened at Fitzroy, at Richmond, at Port Melbourne and there was hell to pay for a while. There were big riots down at the Richmond Town Hall and a whole number of people arrested. One of them was Steve Bagley who was the first to build a real unemployed organisation in Richmond. He got jailed over it. But we beat them. They had to go back to the ticket system and give them out again. We knocked that thing out.

So we kept on other things. We raised the question of clothing. None of us had boots, we were getting around nearly bare footed. The men got an issue of army boots, the women were a bit unlucky, they wouldn’t wear army boots so they had a special shoe made for the women that was almost as bad as an army boot. It was heavy. We got that issue once a year. Then they found out they had thousands of army uniforms left over from W.W.1 and figured that this was a good opportunity to get rid of them. So they gave them to the unemployed. So the first week we were all working around in the tunic. So then the Returned Services League (RSL) kicked up a row. “What an insult to the Army that this scum can walk around the streets in an army uniform.” So they stopped it and had them all dyed black and reissued to us. Well that was the best thing they ever did because wherever you walked and saw someone in a dyed army tunic you knew he was unemployed and you spoke to him. So it helped us develop our organisation.

Every unemployed group had its own meeting place – a little hall or a shop. We’d have all sorts of speakers on different subjects. We also held street meetings in a different suburb each night. At one point we started having meetings at Swanston Street on a Friday night. We’d start there and then the cops would move us on and we’d go up to Russell Street and then we’d head up to Little Bourke Street. Meanwhile someone would start in Little Collins Street and when they were done we’d start in Little Bourke Street and they’d go up to Little Lonsdale Street and so on. You’d reach a whole lot of people that way.

Jim also described a powerful march by the combined union and unemployed workers’ movement – 10,000 marchers holding the police at bay, and winning improvements to access to work and benefits. For more see Jim Munro and the Unemployed Workers Movement in the 1920s and 1930s and Takver’s Radical History site.

A brief and incomplete timeline of social security payments in Australia

This overview shows a consistent erosion of the welfare system, with greater restrictions over time. It should be noted that the ALP initiated aspects of the wind-back (such as the activity test) and consolidated and expanded aspects that were initiated by the Liberal Party (such as welfare quarantining and single parents being moved on to Newstart).

Annie Nash described the creative, fun and radical nature of 1980s protest, with frequent rallies on a wide number of issues. She shared examples of the poster art of the era. She described being arrested at a large action outside the Melbourne Regent Hotel in 1987, which was protesting the Accord and many aspects of the Hawke government’s budget including attacks on the under-18 dole.

As Executive Director of Flat Out Annie brought her understanding of policing and surveillance to discussions of what has changed between now and then. She described how Amanda George was able to talk to those in the lock-up via a megaphone from the solidarity protest outside, in a way that couldn’t happen today. She also emphasised the impact of criminal records on people’s lives, including employment discrimination, and the fact that she and others still have records from the Regent protest.

Annie spoke about the unashamed activism of many community sector agencies in the ’80s which led to lively discussion about what has changed. Funding contracts which limit or forbid advocacy were raised and Annie argued that not-for-profits can segment their funds to provide systemic advocacy through donations and philanthropic support. Luke shared a powerful quote to highlight the impact of neoliberalism on not-for-profits:

It has been argued that one of the corollaries of a competitive corporative culture (predicated on the notion of efﬁciency and performance optimisation) is that it fosters the conditions that lead to the conﬂation of bullying with management. ‘Managerialism’ (the leadership style associated with the competitive, market driven organisational cultures) demands ambitious management, which is prepared to implement cost constraints over service delivery. Workers are recast as ‘productive units’ and traditional service users are ‘customers’. ‘Managerialism’ becomes a form of legitimised bullying – denying promotions, launching unsatisfactory performance actions and/or disciplinary procedures – or even to ensure that a staff member is made redundant. The net effect creates a system that ‘rewards obedience, conformity, quiescence, and punishes non-compliance, eccentricity and dissent. Above all, it breeds fear, cowardice, cynicism and sycophancy’.

For more on this topic see also Tamed or Trained? – The Co-option and capture of ‘favoured’ NGO’s by Ruth Phillips.

Luke McMahon talked about his experiences as a young unemployed person in the 1990s, accessing support services via Youth Access Centres attached to CES (Commonwealth Employment Services, parallel to the DSS Department of Social Security of the time). Luke described the shift in treatment of unemployed people under the Howard government, doing away with YACs and outsourcing the CES to private Job Network providers.

The anger and frustration this sparked led to the formation of the Dole Army. This included a website informing people of their rights in relation to benefits, with the same appearance as Centrelink’s website. Centrelink threatened legal action on the basis that people may mistake the Dole Army site for the official Centrelink site (despite the prominent Dole Army logo), DA countered with ‘cease and desist’ on the basis that people may mistake the Centrelink site for the DA site. The Dole Army’s irreverence and anti-authoritarianism was summed up in the creative hoax on A Current Affair. A response to the inflammatory rhetoric and anti-unemployed bias of tabloid TV, the hoax involved some creative reframing including the ‘Toorak bludger’.

… and see coverage of the response to the hoax here. The laughter in response to Luke’s excellent stories was definitely therapeutic.

Many thanks to Iain McIntyre, Melbourne’s own radical historian, for tips for this Melbourne Campaigners’ Network event. Check out How to Make Trouble and Influence People for more social movement history inspiration.