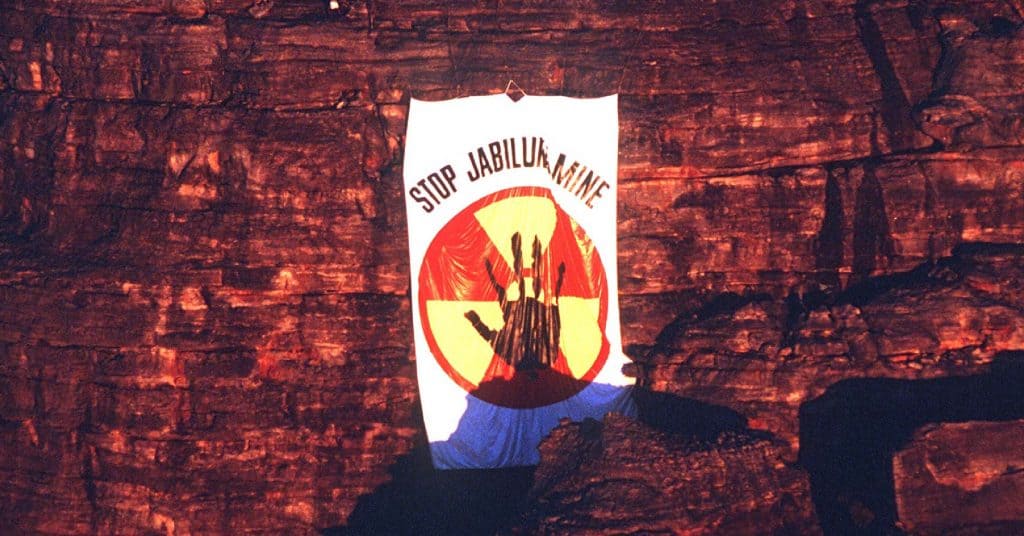 The Mirarr people have fought to protect our country and people from uranium mining for many years. Now we are defending our country against the proposed Jabiluka uranium mine. We invite you to come to our country to join our struggle to uphold the cultural and environmental values of Kakadu” – Mirarr Clan, March 1998

Twenty-two years ago this message from the Mirarr initiated an unprecedented blockade bringing thousands of protesters to Kakadu. 1998 was the height of the decade-long and ultimately successful fight to stop the Jabiluka uranium mine with tens of thousands across Australia adding their voice to support the Mirarr and stop Jabiluka mine. March 2020 marks the twenty-second anniversary of an eight-month blockade involving thousands of peaceful protesters who travelled to support the Mirarr in their fight to stop a mine. The site of the proposed Jabiluka uranium mine in Australia’s Northern Territory is now under active revegetation. There is ongoing monitoring of water on the site as well as weed and fire management but the mine that was predicted to have exported hundreds of tonnes of uranium by 2018 has not been built.

The blockade was a big part of a wider campaign and perhaps if you are reading this you had a hand in stopping the Jabiluka mine.  Heartfelt thanks to you all.

The Jabiluka campaign was an unprecedented against-all-odds effort involving a powerful coalition of diverse organisations and tens of thousands of people both around Australia and across the world. International agencies and parliaments took part, hundreds of people were willingly arrested, legal challenges were mounted, parliamentary processes undertaken and so much more. Despite pressure from the mining company and the government and continual assertions that the mine would be built the Mirarr remained strong in their determination to protect their country from further unwanted mining. And they prevailed, the Jabiluka mine does not exist.

While Jabiluka was halted, rehabilitation of the Ranger uranium mine, adjacent to Jabiluka, is now a significant focus for the Mirarr. Ranger was imposed on the Mirarr in 1978 and the mine must close by January 2021.

As Gundjeihmi Aboriginal Corporation board member and younger sister of Yvonne Margarula, Annie Ngalmirama says: “We want to see ERA do a complete job and clean up the Ranger mine so it can be put into Kakadu National Park. We have all been wanting this for many years.” Archived by The National Library of Australia

Do you know of any other Jabiluka resources to link to or contribute? If so, please contact the Commons librarians.