Support and Leadership in Organising Models

All survey respondents provide some sort of support to their active group members. 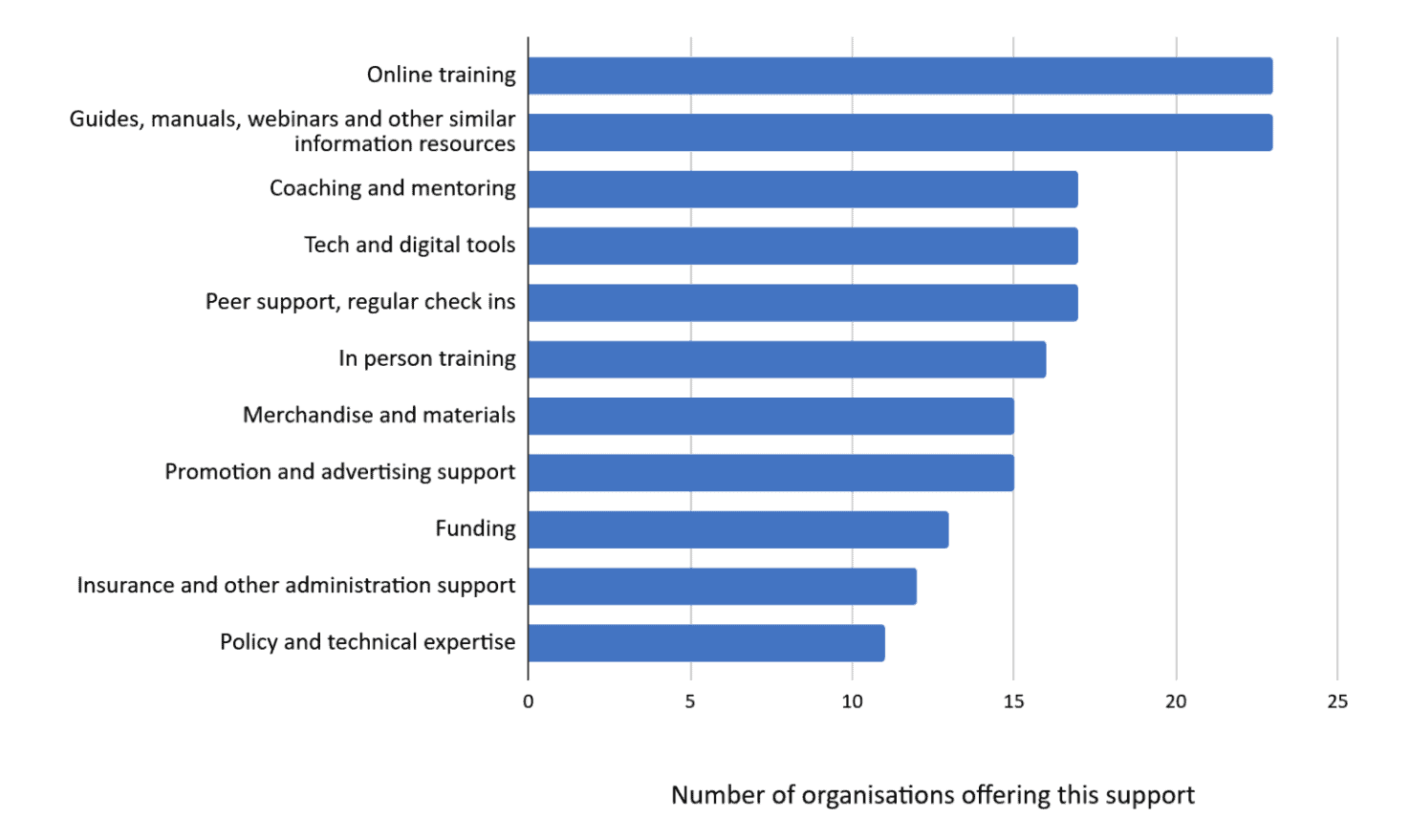 The most common support offered was online training and the provision of a range of information resources. All organisations that responded to the survey offer these support options. One organisation also noted that they offer specific support in drafting communication materials, such as emails, social media posts and other media materials. One other organisation highlighted the importance of one-to-one mentoring as a primary support tool:

1:1 mentoring and supports has been very important so we have stepped up 20 volunteer leaders to support volunteers. Some are leaders of local groups while others oversee a few groups.

How Support is Accessed

As with the types of support offered, organisations had a consistent channel by which the support was accessed by active group members. Almost all groups offered these resources through their websites, while the second most common channel was through peer-to-peer networks. 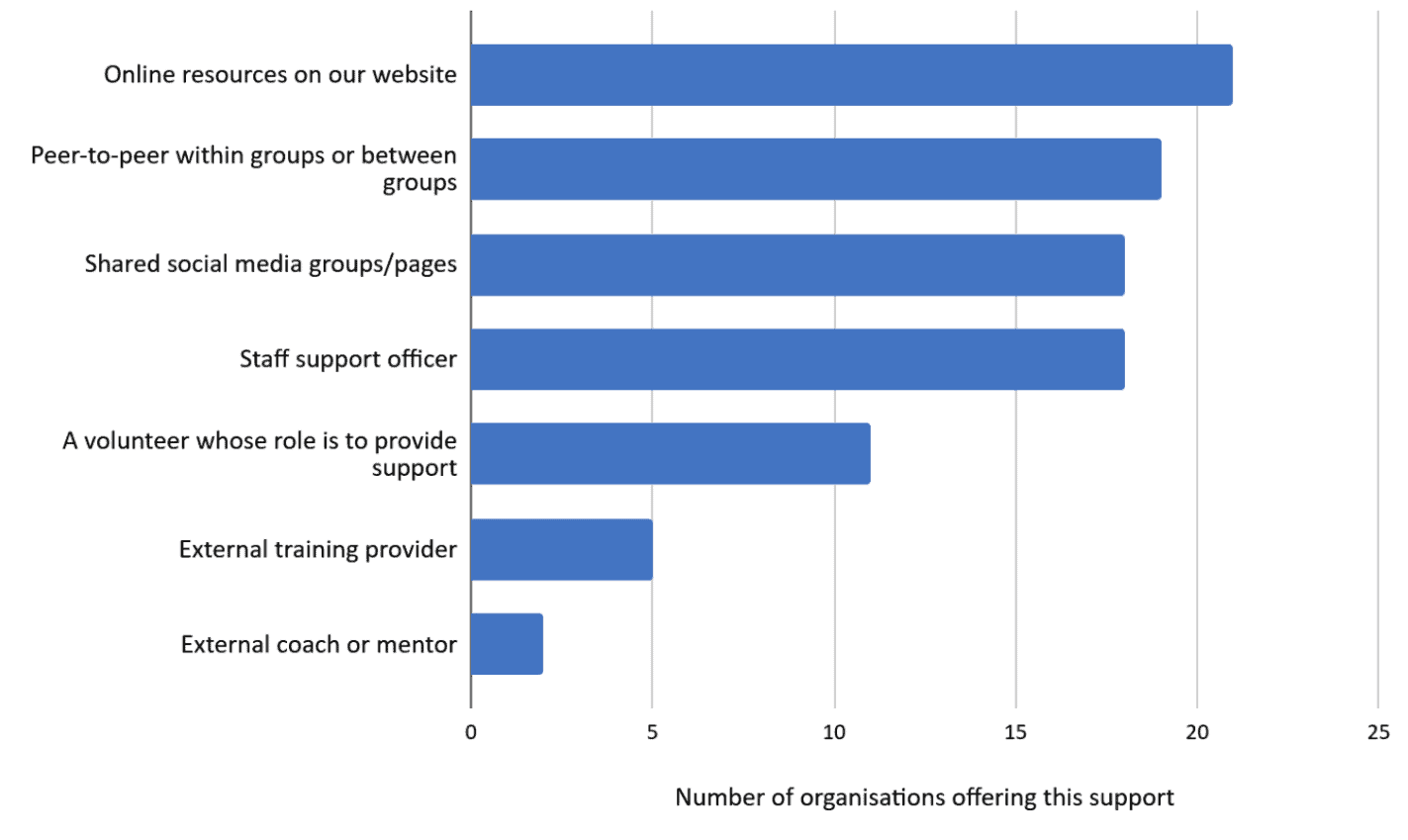 Some organisations that were part of an international network are also able to share resources developed by their international collaborators.

How Leaders are Identified

One of the most frequently mentioned goals of a well-developed support program was to better identify and recruit leaders. All survey respondents noted the critical importance of leaders within their models.

Active group members who took on leadership roles or tasks were able to assist in recruiting more supporters, in reaching out to diverse communities and constituencies, in organising actions and activities, and in growing the reach of the wider organisation. However, despite this importance, significant challenges in recruiting leaders were identified by survey respondents.

We need a way of supporting groups in their early stages while leaders emerge (can take 6-12 months), and also sparking new groups in other places.

Training was the most important method by which leadership was developed by survey respondents. Twenty of the twenty three organisations used this method, while 19 organisations specifically identified leaders. 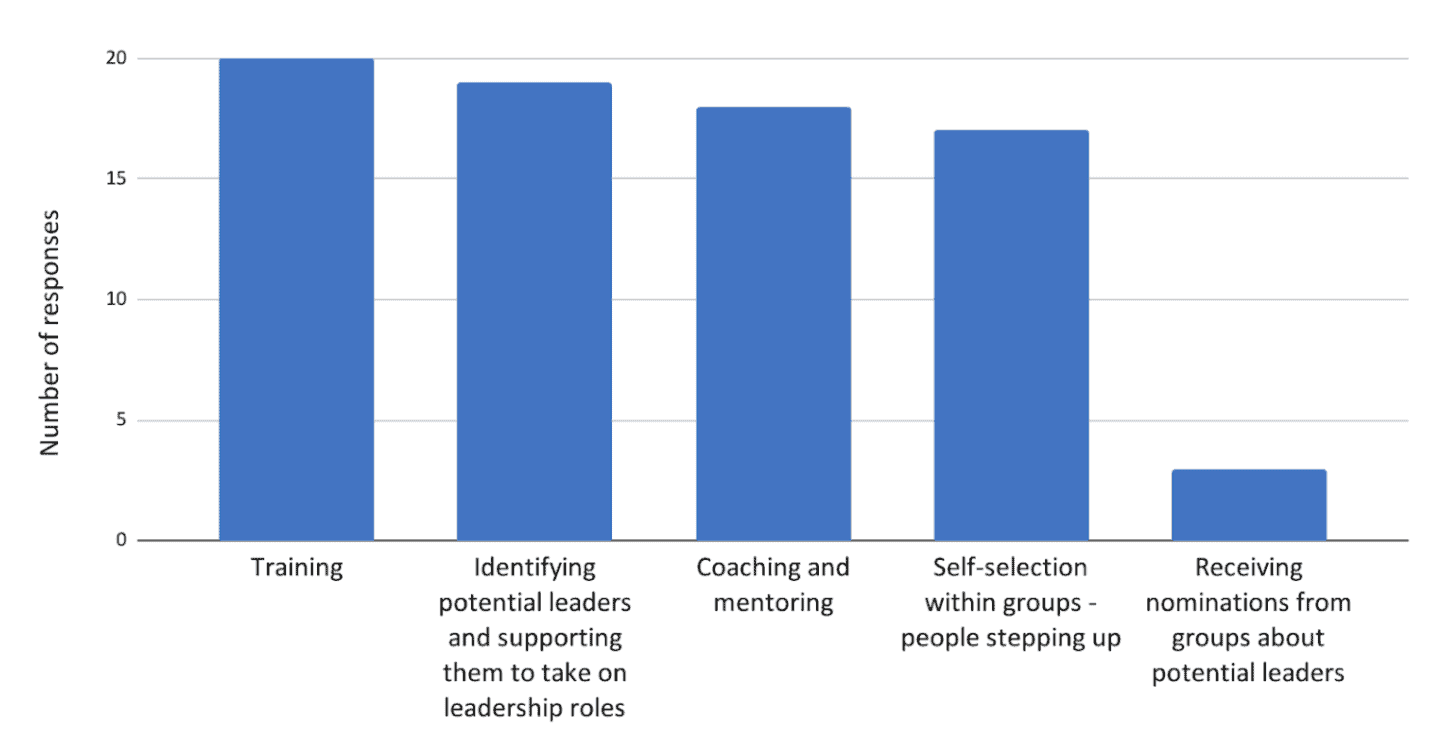 How Leaders are Supported

Some organisations stated specific avenues by which they support leadership development. For example, one organisation that focuses on workplace mobilisations prioritises staff organiser time to help local groups identify leaders and train and mentor them. In addition, they offer both formal and informal training.

Other groups run specific leadership training courses. One organisation notes the importance of leaders within their organising model and runs regular programs to enhance recruitment and retention.

Our strategy states we want to Increase the engagement, commitment and involvement of those already a part of our movement. We run leadership development programs to build core capacity and leadership skills.

Training was seen as an important way in which new leaders can develop their own leadership style and practice balancing their commitment with self-care. For many organisations, ensuring the leaders are able to balance these needs was easier said than done, however.

We need to invest in more training for group leaders on how to run their own group successfully, including being clear on roles for each person within each group so the group leaders aren’t holding everything and doing everything.

Other groups give specific ways in which active group members at different levels are invited to provide input into the organisation’s activities and take on different tasks. For example, the diagram below shows how individuals are moved from ‘community’ to ‘core’, through attending events, to taking actions, to then volunteering and asking others to take actions, up to organising and coordinating volunteers and then finally as a core leader providing the strategy for the organisation. Other organisations have developed a detailed set of activities that define how supporters can move up into leadership roles.