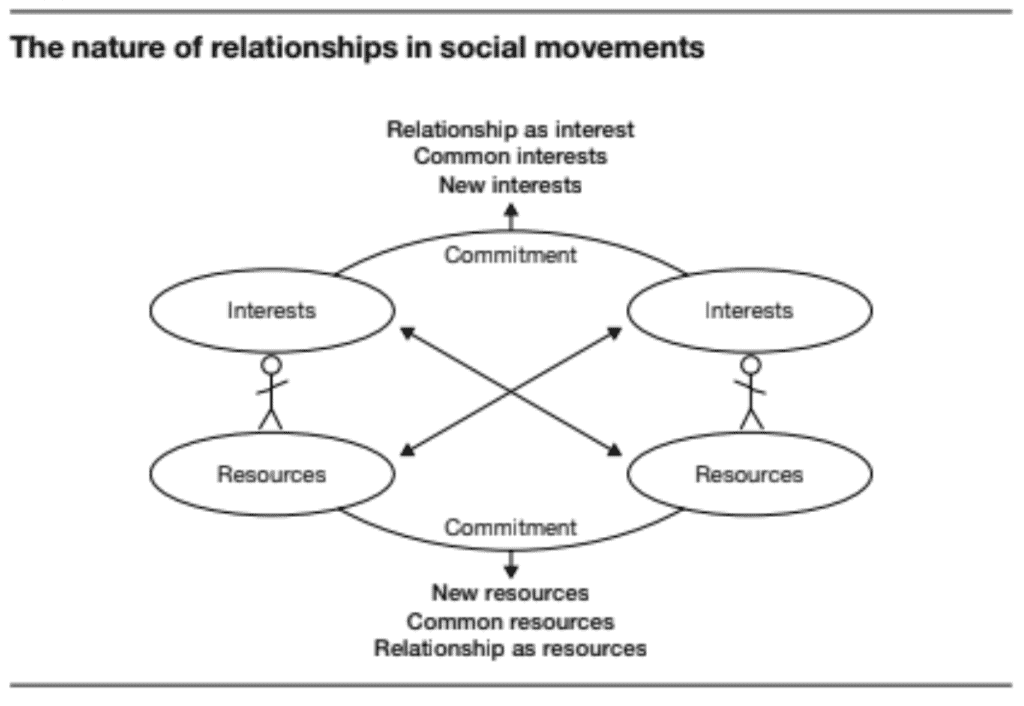 Social movements make a vital contribution to our capacity for economic, social, political, and cultural adaptation and renewal. Their very nature, however, as broadly based harbingers of change creates unusual leadership challenges: they are voluntary, decentralized, and self-governing; they are volatile, dynamic, and interactive; participants are motivated by moral claims, but results depend on strategic creativity; and their capacity to make things happen depends on their ability to mobilize broad levels of commitment. As a result, perhaps their most critical capacity is consistent formal and informal leadership development. – Marshall Ganz

Social movements emerge as a result of the efforts of purposeful actors (individuals, organizations) to assert new public values, form new relationships rooted in those values, and mobilize the political, economic, and cultural power to translate these values into action. They differ from fashions, styles, or fads (viral or otherwise) in that they are collective, strategic, and organized. They differ from interest groups in that they focus less on allocating goods than on redefining them—not only on winning the game, but also changing the rules. Initiated in hopeful response to conditions adherents deem intolerable, social movement participants make moral claims based on renewed personal identities, collective identities, and public action. In the United States, they have been the major drivers of social and political reform since the American Revolution.

Leadership is accepting responsibility to create conditions that enable others to achieve shared purpose in the face of uncertainty.

Leaders accept responsibility not only for their individual “part” of the work, but also for the collective “whole.” Leaders can create conditions interpersonally, structurally, and/or procedurally. The need for leadership (a need often not met) is evident when encounters with the uncertain demand adaptive, heuristic, or innovative response: past practices are breached, new threats loom, a sudden opportunity appears, social conditions change, new technology changes the rules, and so on.

The role of leadership in social movements goes well beyond that of the stereotypical charismatic public persona with whom they are often identified. Social movements are organized by identifying, recruiting, and developing leadership at all levels. This leadership forges a social movement community and mobilizes its resources, a primary source of social movement power. Sometimes those who do this leadership work, especially when they work at it full time, are called organizers, or, more colorfully, lecturers, agents, travelers, circuit riders, representatives, or field secretaries. Sometimes they are simply called leaders. The Grange, for example, a rural organization key to the agrarian movement of the late nineteenth century, enjoyed a membership of 450,000 organized in 450 chapters, a structure that required recruiting men and women for 77,775 voluntary leadership posts, of which 77,248 (99.3 percent) were local, 510 at the state level, and only 17 at the national level. One of every 5 members occupied a formal leadership post at any one time. More recently, a mainstay of the Conservative movement, the 4-million-member NRA, rooted its activities in 14,000 local clubs, governed by some 140,000 local leaders, 1 of every 25 members. And the Sierra Club, a 750,000-member environmental advocacy organization with some 380 local groups organized in 62 chapters, must recruit, train, and support volunteers for some 12,500 leadership posts, of which 10,000 are local: 1 of every 57 members.

Because social movements are dynamic, participatory, and organized primarily to celebrate collective identity and assert public voice, their structures of participation, decision making, and accountability are more like those of other civic associations that celebrate collective identity (churches, for example) or assert public voice (advocacy groups) than of those that produce goods or services. 9

They interact with constituents, not customers or clients. Authority rests on moral suasion more than on economic or political coercion. Outputs depend on the motivated, committed, and voluntary participation of members and supporters. They are often incubators of social movements in the way that black churches, student groups, and NAACP chapters incubated the Civil Rights movement.

Despite the deep roots of leadership studies in sociology, especially within radically different authority regimes, social movement scholars have, with few exceptions, eschewed the project. A structural bias in social movement studies seems to have made it more productive for scholars to identify the constraining conditions that make certain outcomes more probable than to focus on enabling conditions that make many outcomes possible. Agency, however, is more about grasping at possibility than conforming to probability.

One of the few scholars to address the challenges of leadership in voluntary associations, not only social movements, is James Q. Wilson:

In most voluntary associations, authority is uncertain and leadership is precarious. Because the association is voluntary, its chief officer has neither the effective power nor the acknowledged right to coerce the members—they are, after all, members and not employees. In a business firm, the chief officer may, within limits, hire and fire, promote or demote, his subordinates . . . In most associations, power, or the ability to get a subordinate to do what the superior wants, is limited, and authority, or the right to exercises such power as exists, is circumscribed and contingent. Though the authority of many association leaders is weak, the demands of the office are great. The chief officer of a voluntary organization must usually combine the executive task of maintaining the organization with the leadership task of defining and advancing its objectives . . . [M]aintenance needs are better served by having vague or broadly stated goals, whereas task achievement is facilitated by having explicit and concrete ones.

In this paper I focus on leadership in social movements: a volatile context in which motivational, relational, strategic, and action skills—and the capacity to develop these skills in others—play key roles. I draw on examples from the first social movement about which I learned, the Exodus; the Civil Rights movement; the farmworkers’ movement; the women’s movement; and American politics.