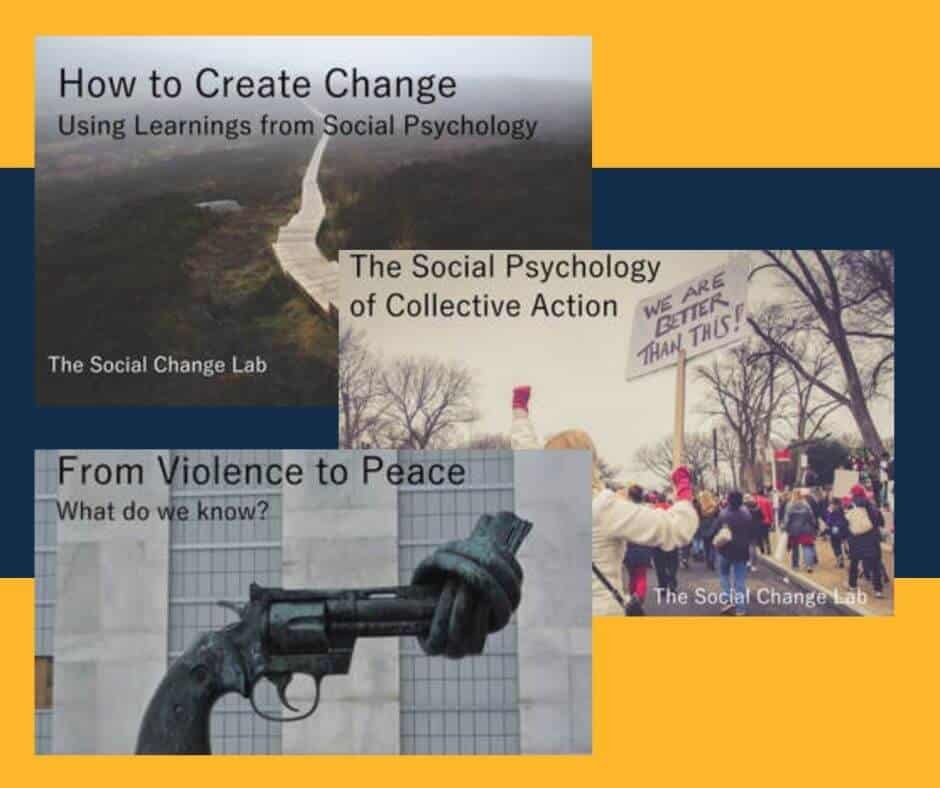 By University of Queensland, Winnifred Louis

A video series from the Social Change Lab at the University of Queensland explores how to use learnings from psychology to create social change.

Click on the episode links to watch each video. Episode 1 – How to convince people to act

Episode 2 – How to build trust

In Episode 2, we talk about how to build trust: three common problems that increase mistrust; and five solutions that help advocates to communicate effectively for change.

Episode 3 – How to have a meaningful conversation

In Episode 3, we talk about how to have a meaningful conversation with someone whose views are jarringly different from your own: by managing your expectations, asking questions to understand where they’re coming from, disagreeing warmly and briefly, telling a story, and leaving the seed in the ground.

Episode 4 – How to empower people to act

In Episode 4, we talk about conversations that empower people to act by managing their expectations, being clear about your theory of how change happens, and communicating what needs to happen and the momentum that’s building in your movement. You can help to create change by being clear on specific actions that people can take in a time frame that people understand. This will show them how to achieve the change they want.

Episode 5 – How to talk to bored people

In Episode 5, we talk about the social conventions that make it polite or rude to talk to people about a cause that you’re interested in, but maybe they’re not. Spending time listening to what people are interested in and where they’re coming from, and sharing who you are and what your story is, will help you to talk about your interests in a way that people can relate to.

Episode 6 – How to talk to angry people

In Episode 6, we talk about what goes wrong when you’re talking to angry people (and when maybe you’re angry too), and how you can have a conversation that’s more constructive.

Episode 7 – How to talk to people who aren’t sure

In Episode 7, we talk about how to engage people who believe that a cause matters, and that action should be taken, but aren’t sure if they’re the right person to act.

This series explores how to use learnings from psychology to understand collective action, how protests succeed and fail, and why people engage, radicalise, deradicalise, and drop out. In Episode 1, Prof. Winnifred Louis gives an intro to the series.

In Episode 2, Prof. Martijn van Zomeren talks about the four key motivations for protest: identity, moral conviction, injustice, and the belief that the action will work.

Episode 3 – What is successful collective action?

In Episode 3, we talk about the way that collective action works across short, medium, and long-term time frames; for audiences of self, supporters, opponents, bystanders, and third parties; and with seven key outcomes for both mobilisation (raising awareness, building sympathy, generating intentions, and evoking action) and persisting to power (sustaining commitment in the longer term, building coalitions, and avoiding counter-mobilisation). The book The Psychology of Effective Activism is available here.

In Episode 4, Prof. John Drury talks about the three core elements of empowerment: shared identities, expressed in actions, with the joyful experience of the possibility of change.

In Episode 5, Prof. John Drury talks about how activist and community groups can build empowerment for activists.

Episode 6 – Why do people drop out of protests?

In Episode 6, we focus on motives that lead people who have come along to one event to not keep going to others.

Episode 7 – How Protest Changes After Failure

In Episode 7, Prof. Winnifred Louis talks about using the DIME model of responses to the failure of protest to understand how tactics evolve towards different outcomes: Disidentification and walking away; Innovation (which can include radicalisation and deradicalisation); Moralisation (growing moral conviction and urgency) and Energisation (redoubled efforts).

In Episode 8, Prof. Winnifred Louis talks about Team Centre and Team Savage Attack – two approaches to protest that are supported by more moderate and more extreme members of a movement. Team Savage Attack delivers satisfying clarity and moral boundaries, and a strong message of the need for change. Team Centre focuses on articulating common ground and seeking to leverage solutions-focused change at the centre.

In Episode 9, Prof. Winnifred Louis talks about radicalisation to violent extremism, and deradicalisation. Part 2 focuses on violent actors radicalising together in groups.

Episode 10 – The psychology of mutual radicalisation

In Episode 10, Prof. Winnifred Louis talks about mutual radicalisation: the process whereby each side’s extremists justify the others’ contempt or violence.