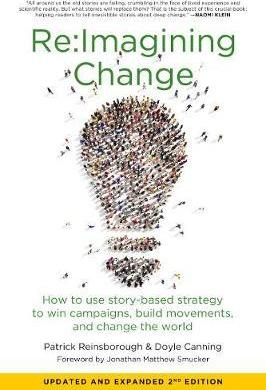 By Center for Story Based Strategy, Doyle Canning, Patrick Reinsborough

Sometimes a breakdown can be the beginning of a kind of breakthrough, a way of living in advance through a trauma that prepares you for a future of radical transformation. – Cherrie Moraga

What happens when the inertia of denial is shattered by unfolding events? As disruptive events ripple through the physical world they dramatically impact our collective narratives and mythologies: conventional wisdom is upended, underlying assumptions are challenged, certainty is dethroned.

These types of seismic events inevitably disrupt the dominant culture’s mental maps and can trigger mass psychic breaks: moments when status quo stories are no longer adequate and those reliant on conventional wisdom are left searching for new explanations. As a result, the narrative landscape can shift rapidly. The assumptions of discourse are exposed, new perspectives are unexpectedly elevated, and issues reframed overnight.

Psychic breaks open new political space and can provide powerful opportunities for new stories to take root in popular consciousness. The devastation of Hurricane Sandy in New York City in 2012 birthed Occupy Sandy, a people-powered disaster relief network that helped to of thousands across the Northeastern U.S. In 2015, after an avowed white supremacist murdered nine African American people in a church in Charleston, South Carolina, popular outrage and acts of protests like Bree Newsome’s courageous action (scaling the flag pole outside the South Carolina state capitol to take down the Confederate flag), forced removal of the Confederate flag from numerous public sites in a matter of weeks.

In the absence of progressive framing, however, these moments are often hijacked by self-serving power-holders to manipulate trauma and re-entrench traditional power dynamics. Old control mythologies are invoked—the historic scripts of fear and blame, targeting people of color, non-Christians, or LGBTQ people. The post 9/11 psychic break quickly turned to warmongering, hate crimes against Muslim Americans, and swift passage of the repressive PATRIOT Act. The 2008 financial crisis became an excuse to bailout wealthy investors while ordinary people lost their homes. Community mobilizations to stop racist police shoots are met with calls by white reactionaries for police escalation to restore “law and order.” Donald Trump seized on the devastation caused by corporate “free trade” agreements but blamed Mexico and immigrants rather than the multinational corporations (like his) who enriched themselves at everyone’s expense.

As the slow motion apocalypse accelerates, the control mythologies that glue the system together will strain under the pressure and new constituencies will experience psychic breaks. Will the fallout strengthen desperate elites struggling to entrench business-as-usual, or magnify popular demands for social transformation?

The answer will be shaped by the orientation of competing social forces. The objective “truth” of such seismic events is no guarantee of a shared narrative or mass response. When control mythologies publicly unravel, our movements have a unique opportunity to frame popular understanding and foreshadow more just futures. To leverage these moments and protect against reactionary backlash, our movements must build the capacity to wage the battle of story in the midst of upheaval, fracture, and rapid change.

People are aware that they cannot continue in the same old way but are immobilised because they cannot imagine an alternative. We need a vision that recognises that we are at one of the great turning points in human history when the survival of the our planet and the restoration of our humanity require a great sea change in our ecological, economic, political and spiritual values. – Grace Lee Boggs

Change versus the status quo is a familiar shorthand for rhetorically uniting the broadest range of constituencies. Even this book has occasionally relied on it as easy code to navigate the mechanics of pan-movement alliances and multisector audiences.

In the fast-changing context of the 21st century, however, the status quo is the struggle to manage change. Elites scramble to react to shifting circumstances. Venture capitalists boast of the “creative destruction” unleashed by their “disruptive” business strategies. Institutions of all types evolve or stagnate based on their ability to rapidly adapt. Grassroots movements balance quelling reactionary backlash with opportunities to promote more transformative solutions.

Growing instability means more psychic breaks. As they chip away at old worldviews, many fights are increasingly about who provides the narration for the culture—will it be the elite media, political figures, right-wing Twitter trolls, or progressive movements? Actively narrating the change means building the power and reach to define public interpretation of the shifts happening all around us.

Is the so-called gig economy or “sharing economy” liberating workers from the shackles of routine and unleashing an entrepreneurial future of prosperous flexibility for all? Or is it actually a sharecropping economy creating precarity, poverty, and inequality for the benefit of the 1%? Will the growing visibility of climate disruption fuel efforts to rebalance modern society within ecological limits? Or will it be used to justify dangerous mega-technological experiments like geoengineering as a desperate gamble to preserve the status quo?

If grassroots movements successfully narrate the changes that ordinary people are experiencing in their lives, there is an incredible opportunity to engage public participation in the fight for systemic solutions. But to win these types of macro-framing contests we must collectively prioritise narrative as a key arena of struggle. Given the enormous gap between what’s politically possible within our current institutional structures and what’s actually necessary, there is an urgent need to articulate alternative visions that dramatically expand the terms of current debate.

In the midst of this historic moment, one of the exciting trends is the growing tendency linking ecological politics with social-justice organizing. New strategies for narrating change that reimagine and combine ecological analysis with demands for racial equity and social justice are emerging. Powerful frames like “just transition” and “ecological justice” are spreading and challenging the entrenched assumption of an all-important mythic “economy” that is separate from (and more important than) people and planet. Visions are taking shape, foreshadowing the multiracial alliances, networks, and grassroots movements that will undertake the grand project of redesigning our society to be sustainable, inclusive, and liberating. Collectively, the work to craft a politics that is commensurate with the scale of the crisis is evolving.