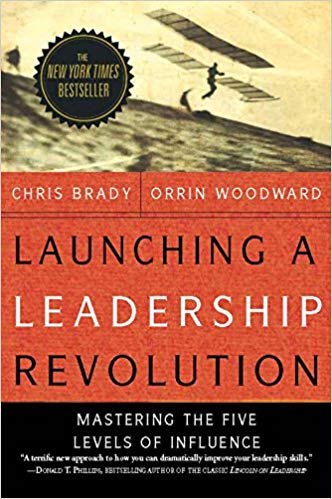 This review of Launching a Leadership Revolution by Chris Brady and Orrin Woodward distils the key lessons that are relevant to social change organisations.

Blimey, I’ve read a lot of books about leadership.

Over time, they get less useful. This is because, firstly, I’ve read the great ones and am now reading the less great ones, and, secondly, because I start out already knowing more of what they have to say.

This point came home to me with Launching a Leadership Revolution, a much-applauded leadership book that, honestly, I didn’t find remarkable.

It did have three ideas that I have liked and taken away from it, and I don’t consider that terrible returns. These ideas were: the five levels of leadership, the raw material of a leader, and the role of vision.

The five levels of leadership

According to Launching a Leadership Revolution, the “five levels of leadership” are:

This jumped out at me, because this book is totally written by corporate hacks, yet this model of leadership corresponds perfectly with organising principles, in that the role of leadership is to develop leadership. In this sense, I prefer to think of them not as ‘levels’ but as ‘layers’ – that as a leader grows they move inwards through the layers (or they develop layers outwards of themselves). This model has a clear delineation between followers (layers 1 and 2) and leaders (layers 3, 4 and 5). And it has a really worthwhile way of thinking about how one becomes a leader – firstly be learning, secondly by performing, and eventually by supporting others to learn and perform.

The raw material of leadership

Early on in Launching a Leadership Revolution we read that the “raw material” for a leader is that they are:

I think one of the greatest challenges of leadership is what Marshall Ganz calls ‘identifying’: being able to discern who is worth developing. Everyone and anyone has the potential to be a leader, but plenty of people won’t become leaders. I don’t think anyone really fully knows the difference between those who do become leaders and those who do not. Nonetheless, it’s helpful to have a few ideas for thinking about this difference, or at least for being able to identify the qualities in those leaders who do end up working out.

And I certainly think that “hungry” and “hone-able” are two things to think of. Learning leadership is a battle, and there is plenty of frustration along the way. The hunger is a crucial source of motivation in the face of this. And then hone-ability. After all, the first layer of leadership is learning – if someone isn’t willing to learn and to be taught, they’re not going to make a good leader. Someone who is hungry should also yearn to be honed, to become more effective to be, as they say, ‘sharpened’. So I think these are some useful ideas about the raw materials of leadership.

The role of vision in leadership

Some ‘leaders’ don’t want to lead from the front. Instead, they act like they want to be led. They refuse to develop and promote their own vision, instead trying to prod their followers to come up with some ideas, which the leader can then manage. This, I suppose, is at best management. It isn’t really leadership.

Rather, leadership means having a vision, sharing it, and using it to inspire people and motivate their best. It means giving people something to follow or, perhaps, something to head towards.

This idea comes up in Launching a Leadership Revolution. “Leaders,” write Brady and Woodward, “must cast the vision consistently before the people they influence.” They take this idea further though, arguing that a vision itself isn’t enough – people must also have a leader they can believe in:

I think this is great, and very consistent with the idea of ‘hungry’. I think any organiser practices leadership be knowing their own vision and using it to inspire others – as well as using their own example and relationships. This idea is neatly explored in Launching a Leadership Revolution.

Now you don’t need to read it.

I realise this isn’t much. But the good news for you is that it is basically all that this halfway-decent book had to offer. If you think this is good though, I still caution you against reading the Launching a Leadership Revolution – you’ve basically got it all already.