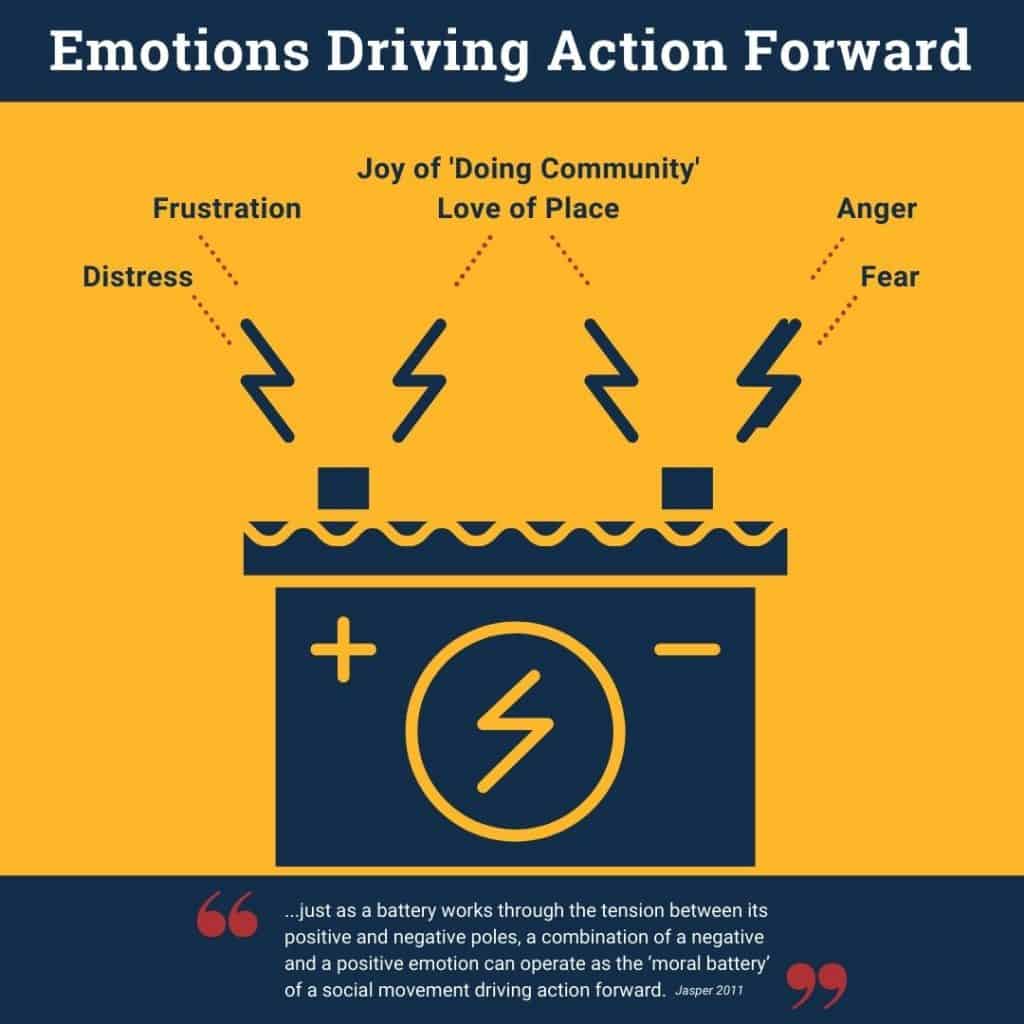 Emotions play an important role in mobilising people to take action on social and environmental issues. In this study of the anti-coal seam gas movement in regional Australia the authors found that anger about coal seam gas mining mobilised people to take action, but the combination of anger with the joy of connecting with the community helped sustain the movement over time.

This study focused on the movement formed to oppose the Narrabri Gas Project, which proposed to develop 850 gas wells largely within the Pillaga State Forest in New South Wales, Australia. This movement was made up of urban and rural people crossing the political spectrum and began in around 2009. They were united by concerns about the impact of coal seam gas mining, such as: This concern holds a lot of emotional content, expressed through fear, anger, frustration and outrage. But how do these emotions mobilise activism and do they change over time?

Why are Emotions Important?

A rich and diverse range of research has highlighted how emotions play a central role in forming social movements.

Fostering emotional responses about an issue helps movements recruit potential members and influences whether the movement successfully achieves its goals. Emotional engagement about an issue can also affect how activists stay active.

While many different groups including farmers, environmentalists and Aboriginal people were opposed to the Narrabri Gas Project, significant tensions have sometimes existed between them. The common enemy of coal seam gas production helped create alliances between these groups and find common ground. Being angry about these issues clearly motivated people to become involved in the anti-coal seam gas movement. However, the researchers noted that the special way in which people in small rural communities ‘do anger’ was important.

We find that while anger is the central emotion fuelling the anti-CSG movement in and around Narrabri, how people ‘do anger’ in a rural context is key to understanding how movement participants come together and negotiate their differences. The small rural community context also enables movement participants to combine anger with the joy of ‘doing community’ together.

Where Emotions are Expressed

The researchers found that activists expressed their emotions in three different spaces: People expressed a range of emotions they felt through their activism.

The researchers found a similar ‘emotions ladder’ first described by a group of researchers examining anti-resource extraction movements. The combination of initial anger joining with frustration against a perceived lack of respect and engagement by authority figures was linked to using ‘direct action’ tactics. Feeling these emotions motivated people to consider whether they would like to take part in actions themselves.

Strong emotional responses to coal seam gas proposals had to be managed when working in groups with others. Activists noted that it was important to avoid confrontation, and actively try and manage emotional responses, so that everyone could keep participating in the movement.

An important part of this was emphasising the value of mutual respect. This could have helped open up more spaces for women and Indigenous groups. It may have also helped activists over the term, especially since unlike professional organisers these local activists were unable to ‘take a break’ from the issue, or remove themselves when challenges arose.

An important way to help foster this was to cultivate values such as hospitality, loyalty and generosity. Groups would do this both in the community and with other groups, helping connect farmers, Indigenous participants and environmentalists.

Unlike in private and group spaces, it was more difficult for people to express emotions in the public sphere. Emotional responses are discredited by proponents of CSG, and so activists sought to instead project ‘reasonableness’.

One way of expressing emotions while still being ‘reasonable’ was through promoting survey responses. The frequent use of ‘Gasfield free’ declaration pledges, showing very high disapproval of coal seam gas, also supported a sense of fairness and justice.

While anger is the most important emotion fuelling the anti-CSG movement, the balancing and negotiation of this anger in a rural context enables different groups to come together.

The combination of anger alongside the joy of social connection helped sustain the movement.

Bringing together people to feel that joy also helped people to process negative emotions and avoid burnout. This process helps charge our ‘moral battery’, where the combination of a negative and positive emotion helps generate the power that drives a movement forward.