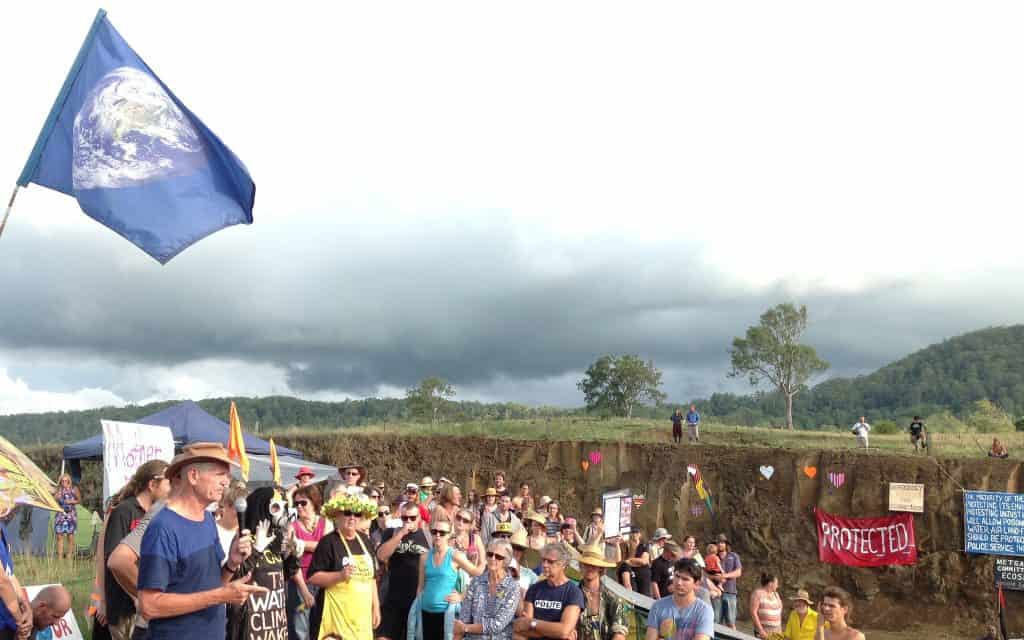 An examination of the social movement dynamics involved in Gasfield Free Northern Rivers and the Bentley Blockade by two key leaders. Annie Kia is a campaigner and capacity-builder whose work in the Lock The Gate movement is informed by complexity theory. Aidan Ricketts is a lecturer in the School of Law and Justice, Southern Cross University, and a social change trainer and author. To download the full article click on the PDF in the box at the bottom of this page.

The stories told of the Franklin, of Jabiluka, they’re going to be told of Bentley and the reason those stories are told is that we really need to know how you did it.
Senator Scott Ludlam, Bentley Blockade, May 18, 2014

The Bentley Blockade was a rare occasion in Australian history when an entire region stood up to government and corporations and held the line. The confrontation took place near Lismore in the Northern Rivers region of New South Wales. It was a turning point in the growing national movement against coal and gas industry expansion in Australia, but what made Bentley unique was the extent to which it mobilised community support across the region. Farmers, Indigenous people, townsfolk, environmentalists, professionals and businesspeople united in a vision of a Gasfield Free region and thousands committed to a path of nonviolent direct action (NVDA) to help achieve it. The Northern Rivers campaign, like the overarching Lock The Gate community movement around Australia, achieved a unity of purpose based on values shared by diverse participants.

The blockade was a culmination of several years of movement building. The headline events in the Gasfield Free campaign are well documented in media reports from that period, but what remains elusive, and is best understood from an insider’s perspective, is how the emerging social movement was organised.

The most visible organising entity for the movement was Gasfield Free Northern Rivers (GFNR), an alliance of numerous autonomous, collaborating action groups from throughout the region. GFNR was an unincorporated entity with no constitution, no formal membership, and no formal office bearers. Nevertheless, GFNR supported the emergence of a very large, complex and adaptable regional social movement, in concert with a tightly focused political campaign. Although loosely organised, GFNR achieved coherence through fluid performative leadership and constantly evolving structural constraints.

This article explores the movement-building and blockade phases of the emergence of GFNR, with specific reference to the use of principles derived from complexity theory and from David Snowden’s related Cynefin framework. The Cynefin framework has been applied in management contexts, in health settings and in health promotion and collaborations. Through practitioner action learning, the framework is continuously developed by David Snowden and colleagues in Cognitive Edge. To the best of the authors’ knowledge, it has not previously been used to understand a social movement. For the social movement, the Cynefin framework provided an experimental rather than an ideologically driven frame for the GFNR’s choices about structure and leadership. The article tells the story of the emergence of the movement through reflection and contemporaneous sources, but also refers to some relevant academic literature in relation to social movement organisation and complexity theory.

The research is predominantly primary research based upon three main sources of data. These include; first, the authors’ own observations and analysis as fully immersed (‘emic’) participants within the social movement, second, semistructured interviews conducted with other relevant participants (activists and police), and third, the collection of published and unpublished data. The latter includes contemporaneous media reports and commentary; government or industry publications; internal GFNR documents; and government communications obtained through formal information access requests.

The emic participant approach is well suited to the study of social movements because deeply embedded researchers, as insiders, are best placed to understand the complex interactions taking place. This is particularly so where the social movement is engaged in civil disobedience and is challenging powerful vested interests, and trust, for externally situated researchers is very difficult to establish. The authors personally played significant educational and leadership roles within GFNR.

The Bentley Blockade has been described by the local Police Commander, Superintendent Greg Martin as ‘[t]he biggest public order exercise ever encountered by the NSW police force in its history.’ It was a well-equipped physical blockade, supported by a large and fluid campsite and backed by a regional support network of five to ten thousand people. A briefing paper from Assistant Police Commissioner Jeff Loy, to the NSW state government, about the blockade, reported on the growing support the blockade enjoyed from the surrounding population; the sophisticated nature of the physical blockade, including the use of buried structures for locking in protesters, and the capacity to mobilise many thousands of people from neighboring towns and districts at short notice. Echoing the observations of Superintendent Martin, Assistant Commissioner Loy described the situation as ‘an unprecedented public order challenge.’ The Bentley Blockade was the third in a series of blockades in the Northern Rivers against exploratory drilling by the resources company Metgasco. The NSW government responded to the size of the Bentley Blockade with a planned police operation involving more than 800 police, code-named ‘Operation Stapler.’ On 15th May 2014, the NSW government changed course and suspended Operation Stapler, as well as the company’s drilling operation at Bentley.

Listen to this Changemakers Podcast (from 21.24 mins) about the alliance against Coal Seam Gas in the Northern Rivers region.