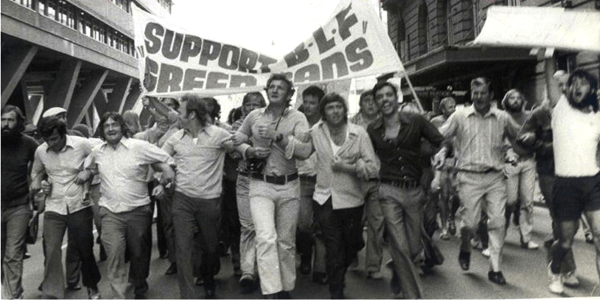 Jack Mundey and the BLF marching in Sydney.

Business was booming in major cities across Australia during the 1960s and 1970s. Vast amounts of money was being poured into commercial property development but historic buildings and areas of affordable housing were often destroyed in the process. Somewhat ironically, had a union with a social conscience not halted development, the architectural heritage of Sydney would have been lost.

As the skyscrapers soared further skywards, historical sites covering the breadth of Sydney came under threat during the building boom of post-War Sydney.

In 1973, the birthplace of European Australia was the proposed site of a $500 million development featuring executive apartments on the foreshore where the First Fleet landed almost 200 years earlier, Centennial Park was slated for a sports stadium and the Botanic Gardens almost became a car park to the Sydney Opera House.

“There was a building boom on and there were no planning controls at all,” says Dr Meredith Burgmann, co-author of Green Bans, Red Union. “Basically, in the late 60s, if you bought the most historic building in Sydney, you could demolish it the next day and there was nothing to stop you.”

There was corruption. There was a lot of hot money coming in from America. The skyscrapers were just going up without much thought or planning. And really, Sydney would have been a very different place if you hadn’t had the Builders Labourers there in that four or five year period, halting development and saying no.

Ten years earlier, however, the corrupt leadership of the New South Wales (NSW) Builders Labourers Federation (BLF) had backed the building boom because they were in the pockets of developers. This added to the increasing frustration felt by the rank and file, who didn’t share in the spoils of development.

Faced with worsening conditions on the building site, they undertook a ten-year campaign to overthrow the leadership. By the late 1960s, Jack Mundey had become General Secretary, Bob Pringle the new President and Joe Owens a temporary organiser.

The new leadership moved quickly to civilise the industry and introduce a democratic organisational structure that included limited tenure of office to regularly reinvigorate the union.

In May 1970, the NSW BLF’s new approach was first tested when builders’ labourers went on strike over an increase in their wages as well as industrial recognition of their skills. Known as the Margins Strike, employers accepted the demands of the union after five weeks.

The success of the strike gave greater confidence to the rank and file, who then backed the BLF in their support of other social movements, according to Mundey. “The great strength of the union historically is that we were open. We had carried out the basic tenants of the union, that is to lift wages, to [provide] safe working conditions and to give dignity to ordinary workers.”

Once that had been achieved, the NSW BLF believed they should use their strength to support other social movements.

During the 1960s and 1970s, the union supported both the women’s and gay movements by placing industrial bans on sites where individuals were fighting for their rights. During the Vietnam War, they helped ‘draft dodgers’ and participated in the huge ‘Moratorium’ marches.

The NSW BLF also organised demonstrations in support of the Gurindji people, who striked for better working conditions on a cattle farm in the Northern Territory where they worked. In 1972, the black movement organised the ‘Black Moratorium’, using the model of the Vietnam Moratoriums, in which many BLF members marched.

A year earlier, the rugby union team of South Africa’s apartheid state toured Australia, facing massive protests across the country. Before a Springboks match in Sydney, Bob Pringle and John Phillips, then senior BLF officials, broke into the Sydney Cricket Ground and began to saw down the goal posts before being arrested by the police.

Driving those actions was the leadership’s firm belief that union muscle should be used to champion broader issues. “That the union movement, of course, while ever unions exist, wages and conditions are important, but increasingly other issues concerning the environment and the quality of life are equally as important,” Mundey says.

During the building boom, this meant that development priorities should be reversed and that the preservation of open community and heritage buildings, as well as the construction of more afford- able flats and houses, was more important than piling up empty or under-used commercial office buildings.

In that context, she believes that environmental activism became an almost inevitable next step.

A group of middle-class women who were trying to save the last remaining bushland on Parramatta River certainly believed so. They had already taken an interest in the BLF, having read a comment by Mundey where he said that quality of life issues should be of concern to the trade union movement.

The struggle to preserve the bushland had begun in 1968 when developer AV Jennings unsuccessfully attempted to re-zone the site. In 1969, the Council switched the area from open spacing to residential zoning. In September 1970, ‘The Battlers for Kelly’s Bush’ were formed to oppose the re- zoning and to campaign for the State Government to purchase the land.

In June 1971, the Battlers phoned a number of unions. “[President] Bob Pringle had gone out there to talk to the women who, in desperation because they’d tried everything else, had rung the Builders Labourers,” Dr Burgmann explains.

The idea that a left-wing union should support a group of middle-class women in an environmental campaign was fiercely debated. “I knew some of those women through my parents. They were CSIRO wives. And they were very middle class, Hunters Hill ladies,” Dr Burgmann smiles. “They’re the first to say what a strange combination they were.”

Pringle, and later Jack Cambourne, who was Secretary of The Federation Engine Drivers and Firemen’s Association of Australasia (FEDFA), a very small union that operated machines on building sites, visited the area and decided that Kelly’s Bush should be kept as bushland.

“Bob reported it to the union and you actually see in the minutes [that] there was ‘a discussion’. The minutes were never very helpful. They’d say, ‘there was discussion’,” she laughs. “But from the recollection of those I interviewed, they remember that the class issue did come up. You know, why should we be helping people in Hunters Hill to have a nicer environment?” The Battlers for Kelly’s Bush called a meeting to demonstrate widespread community support, which over 500 people attended. In response, the union placed the world’s first ‘Green Ban’ on the site.

Black ban had been used to describe when unions took action to improve wages and conditions. Green Ban was used to signal a broader concern about the environment and to garner widespread community support.

Following the success of the Kelly’s Bush action, the BLF were inundated with similar requests from other resident action groups and environmentalists. But the union was always selective in applying a Green Ban. There always had to be an approach to the union from the community. There also had to be genuine, widespread concern and a public meeting held to request a ban, primarily to ensure the union rank and file supported the leadership.

By 1974, over 40 Green Bans had been put in place by the NSW BLF, holding up more than $3000 million worth of development. Over 100 buildings, later considered by the National Trust to be worthy of preservation, were among those saved.

Even so, the Askin Liberal Government damned it as industrial anarchy and the Sydney Morning Herald editorialised that “Mr Mundey and his men” should stick to demolishing and building what they were told.

Following Kelly’s Bush, Green Bans were placed on Centennial Park, which the Askin Government had earmarked for a sports stadium in the faint hope they would get the 1988 Olympic Games.

Inner-city suburbs such as Glebe were almost flattened when the Government announced a plan for three hundred and fifty miles of freeways heading in six directions.

Other bans included the Botanical Gardens, which was slated as the Sydney Opera House car park when the developers realised the missing item in their plans, and the Theatre Royal was almost demolished under a proposal to consolidate a collection of buildings into one skyscraper. And perhaps the most well known Green Ban was The Rocks, which was protected from becoming high- rise executive apartments.

Refusing millions of dollars from developers to lift the Green Bans, the NSW BLF were eventually smashed by a corrupt element of the union movement.

The federal leadership of the BLF, under Norm Gallagher and in concert with the government and employers, intervened to demolish the NSW BLF and set up a new loyalist branch. By April 1975, the Federal Council expelled Mundey and 25 other branch members for life.

Despite his expulsion, Mundey has no regrets. He believes the legacy of the Green Bans “is that people feel that they’ve got the right to speak up. Developers cannot get away without a lot of scrutiny being applied.”

At a political level, the bans encouraged the Wran Labor Government to create a raft of new legislation, linking the environment to heritage and planning.

Mundey says, “at the time, of course, from right-wing forces and conservative forces, we were vilified and condemned. With the passage of time, we’ve been well and truly vindicated. There’s hardly anyone now that would not agree that the Green Bans were one of the most positive happenings in the social movements of this country.”

Back where it all started, the struggle to preserve Kelly’s Bush lasted for 20 years but in 1994 the land, having been purchased in 1983, was entrusted to the care of the Hunters Hill Council by the NSW government.