Renee Carr, Executive Director at Fair Agenda, shares lessons learned from Fair Agenda’s role in campaigns to win safe and legal access to abortion care in Queensland, New South Wales and South Australia. These lessons were presented in a speech at the FWD + Organise conference held by Australian Progress in 2021.

I’m joining from the land of the Wurundjeri people of the Kulin nation and pay my respects to Elders past and present. I’m here to share five lessons from Fair Agenda’s work on campaigns for safe, legal and compassionate access to abortion care in Queensland, NSW and South Australia.

Fair Agenda is a community campaigning organisation with 43,000 members working for a fair and gender equal future. During these campaigns we were a staff team of less than three.

Our work on these campaigns started in Queensland in 2017. It started with responding to a private member’s bill, and built to getting pro-choice election pledges from candidates, turning out a thousand Queenslanders for a march for abortion reform, and driving targeted constituent pressure on key undecided MPs using a custom ‘vote pro choice’ web tool to allow thousands of voters to see if their MP had a public stance on the bill (and then to send them custom messages based on that public stance).

When the sector’s collective campaigning secured the passage of reform in Qld in 2018, Fair Agenda then shifted our focus to supporting reform efforts in NSW.  We duplicated many of the tactics and approaches from Queensland, with the addition of rapid response efforts to block amendment attempts.

Then, after a massive collective effort secured reform in NSW, we moved our focus to SA – again focusing on mobilising members and combatting amendments.

Lesson 1 – Combine powers and know where you add value

The most important thing to know about these campaigns is that they were a massive joint effort. Across the three states I mentioned, Fair Agenda worked in collaboration with a number of organisations like the Human Rights Law Centre, Pro Choice Qld, NSW Pro Choice Alliance, SA Abortion Action Coalition, Children by Choice and Women’s Electoral Lobby.

Who we partnered with, and the role that Fair Agenda played differed in each state – depended on our strategy to win the campaign, the local groups and their focuses.

So, for example – in Queensland, members of our staff team met with multiple MPs to discuss their position and work to persuade them to oppose the amendments we were expecting. When we got to the campaign in South Australia, the wonderful local partners we were working with had their own well established avenues into many MPs, so Fair Agenda focused instead on mobilising our members locally.

Our resourcing and focus decisions were anchored in a sense of where we could complement or bolster the efforts of the groups we were collaborating with, and expertise and capacity they brought.

Lesson 2 – Know what the fight is actually about

A big part of the campaign was about shaping the narrative. We know that anti-choice groups use radically different language about abortion care laws.

A really important focus for us in the South Australian campaign was pre-empting opposition attacks, and the amendments we knew they were likely to rally behind.

We looked at what our opposition were likely to say. What they actually *mean* when they say that.

We wanted to make sure that we weren’t having those fights on their terms. And that meant figuring out what we believed those fights were about, so we weren’t just negating their statements.

We built the messaging strategy early  – but critical to its success was actually putting time into making sure people would use it.

In South Australia, that meant working with partners and messengers to ensure wording was something they’d actually be comfortable using in meetings with MPs and media. 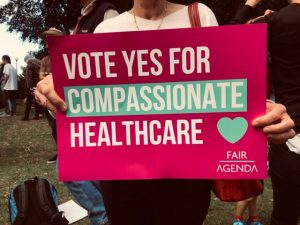 Critically, once we’d developed that messaging we also delivered training to our partners on the thinking behind the messages and the resource. We ran people through:

We evaluated each of our campaigns – the strategy, the execution, and what our opponents did.

When the collective efforts secured the win in Queensland, there were lots of lessons that we were able to leverage in NSW.

So make sure your evaluation considers:

Those are Fair Agenda’s five lessons from our contribution to the campaigns to win safe, legal and compassionate access to abortion care.  And I’ll close with a final thought – which is – this fight is never over (as we’re seeing with the potential impacts of the Religious Discrimination Bill).

The fight is never over.

About the Speaker and Conference

Renee (she/her) is a campaigner and strategist passionate about growing movements for change. At Fair Agenda she has led campaigns that have: secured millions in additional funding for domestic violence services, stopped almost a billion dollars of cuts to parental leave, and helped decriminalise abortion in Queensland, NSW and South Australia. In 2015 she was named as one of Australia’s ‘100 Women of Influence’. Before co-founding Fair Agenda, Renee was part of the team that led The End of Polio campaign to secure $118 million in additional funding from countries for global polio eradication efforts. Renee has a Bachelors of Law and Arts at the University of Melbourne.