In their book, Re:Imagining Change: How to Use Story-Based Strategy to Win Campaigns, Build Movements, and Change the World Patrick Reinsborough and Doyle Canning discuss the importance of selecting and effectively targeting points of intervention, “specific places in a system where a targeted action can effectively interrupt the functioning of the system and open up opportunities for change.” The following Australian examples demonstrate how these points can, and have been used, to intensify impact in terms of ensuring visibility, challenging opponents, and disrupting narratives.

To read an extract from Reinsborough and Canning’s work on this topic visit here.

The Point of Production: The 1971 Harco Occupation

The Point of Production includes factories, workshops, research facilities, farms and other places where goods are designed and made for consumption. Action at this point can challenge assumptions about who the workplace belongs to and who has the right to make decisions. One powerful example was the occupation of the Harco Steel Factory in Campbelltown, Sydney in 1971 after five boilermakers and an ironworker were sacked.

The company had long employed the tactic of stockpiling materials before firing workers, thereby undermining the efficacy of strike action. Rather than walk off the job the Harco workforce bucked their employer’s right to hire and fire and declared their boss, rather than their six co-workers, “surplus to requirements.” Ignoring management they organised their own schedules announcing “We, the Harco workers, having taken control of co-operation among ourselves are able to produce more and have no desire to return to the outmoded system of non-constructive employer supervision.” They implemented the 35 hour working week, making it the first site covered by the boilermakers’ union to achieve this long-standing goal.

Despite calls from their unions to either accept the sack or go on strike, the workers remained onsite for four weeks. During this time they received wages through donations from other unions and worksites as well as food and support from the local community. They completed all remaining jobs despite their employer cutting off power and removing tools. They used intervention at the point of production to protest and defy sackings while shining a light on the possibilities of worker’s control. 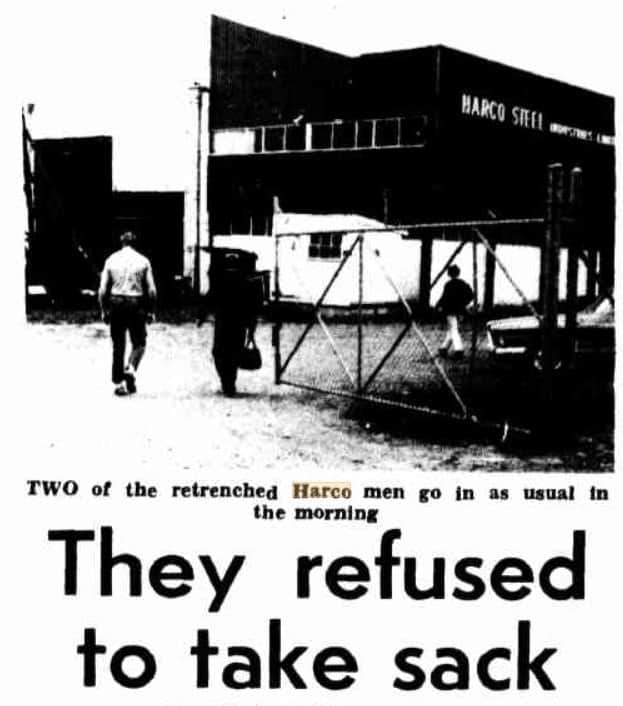 The Point of Destruction: The 1979 Terania Creek Blockade

The Point of Destruction is often a place where mining, demolition or other activities threaten to destroy or harm an area of ecological, heritage or social importance.

In 1979 approximately 100 people opposed to the imminent destruction of rainforest habitat met at Terania Creek. Having spent five years lobbying and writing public submissions to no avail they spontaneously decided to set up a protest camp. Utilising improvised tactics such as placing bodies, objects and vehicles upon roads and occupying trees they risked their lives and disrupted work for around four weeks before the NSW state government placed a moratorium on logging. Following further blockading at Mount Nardi and Grier’s Scrub in 1982 the NSW government created a new series of national parks that included all of the forests where direct action had taken place.

By intervening at the point of destruction activists not only physically slowed the pace of logging but also challenged government assumptions which saw rainforests as nothing more than a cheap source of timber. With media coverage of the protests exposing the public to the beauty and ecological value of these places, and the devastation that logging wrought upon them, activists were able to convey the importance of saving what little rainforest remained in NSW. Such action at the point of destruction irrevocably changed the way many people thought about the environment and brought previously hidden activities in remote places into the public eye. Combined with demonstrating the value of then new forms of direct action and horizontal organisation these blockades kicked off the decades of environmental blockading that followed. The point of consumption is the place where people interact with a product or service that is linked to injustice.

Consumer boycotts of goods and services linked to the racist apartheid system in South Africa, and protests at retailers who sold them, contributed to the growing international economic pressure placed on the regime from the 1960s through to the early 1990s. Actions such as placing stickers on South African goods, giving leaflets to consumers, and picketing supermarkets, airlines and other stores and offices, were carried out by anti-racists across Australia. This photo shows one of dozens of actions that occurred during the mid-1980s. The protest began at the offices of South African Airways and then shifted to Sydney airport. The popularity of such action reflected the accessibility of points of consumption and the ease of contributing to broad pressure. Recurrent protests raised the issue of complicity with apartheid on a local and national level, cost companies profits and harmed their reputation, and added impetus to calls for the Australian government to introduce sanctions. The Point of Decision: The 2005 Forbes Global CEO Conference

The point of decision is where those who hold power and possess the ability to meet campaign demands are located: places such as parliaments, shareholder AGMs, and international negotiations. Actions can target well known players but they can also be used to expose and pressure those whose role is more hidden.

Beginning in the late 1990s a series of global justice protests achieved this by targeting corporate summits. Bringing together a “movement of movements”, protests outside and inside these events revealed the responsibility of attendees for a range of injustices. The exposure of deep links between corporations and governments, when combined with physical disruption by protesters, undermined the ability of such gatherings to formulate negative policies and treaties and forced them to make concessions.

In 2005 the Forbes Global CEO Conference brought 350 of the world’s richest business leaders to Sydney. Protesters challenged corporate power and built links between a range of campaigns during demonstrations outside the event as well as through actions that included a Critical Mass bike ride, sit-ins at company offices, and a protest outside the conference’s opening party at the Opera House. Effective actions not only use relevant physical locations to grab attention and generate pressure, but also intervene at the point of assumption to challenge and change popular understandings and beliefs regarding an issue. All of the actions highlighted so far shared messages and shifted narratives.

A campaign that was particularly successful in changing public consciousness: Billboard Utilising Graffitists Against Unhealthy Promotions (BUGA-UP). During the 1980s and 1990s activists revised hundreds of misleading advertisements around Australia. Their work played a major role in forcing health issues related to tobacco and alcohol onto the public agenda, changing the narrative around sports sponsorship and the image of drug dealing companies in the process. It also cost tobacco companies, and the advertising industry which supported them, profits while raising the question of how visual space should be used. The Point of Opportunity: Day of Mourning, January 26th 1938

Specific dates, national holidays and commemorations, as well as events and appearances by decision makers and other public figures, can offer opportunities for well timed interventions.

Held on the 150th anniversary of the invasion of Australia the first-ever national Aboriginal civil rights gathering in 1938 challenged the meaning of January 26th by declaring it a Day of Mourning. Preceded by a march the conference brought together Henry Fergusson, Jack Patten, Pearl Gibbs, Doug Nichols, William Cooper and other First Nations activists. Attendees released a statement of protest calling for “full citizen status” and “equality within the community.” Invasion and Survival Day rallies and events held on January 26 have continued their tradition and the fight for equality and sovereignty in more recent decades. The Point of Transportation: Frontline Action Against Coal, 2012-2022

The points of intervention covered in this series are by no means exhaustive and campaigners should always be on the lookout for new ones as well as variations on those that are tried and true. One which did not appear in Reinsborough and Canning’s original typology is the Point of Transport. Warehouses, railways, ports and other key points in logistics and supply chains are all places where people can engage in and support workplace struggles as well as disrupt and draw attention to the movement of goods used for destructive activities. Action at such points can also alert people to the presence and deployment of warships, weapons and troops.

Over the past decade Frontline Action on Coal and other climate justice activists have regularly held blockades and other actions that have interrupted the transport of coal. Doing so has held up exports and cost the companies involved money while highlighting the complicity of transport companies and government bodies in global warming. Actions, such as the one seen in this image from 2021, have also demonstrated the commitment of activists to ending coal mining while sharing messages that have changed how many people view the industry and polluting energy sources overall.