Points of Intervention, as identified by Patrick Reinsborough and Doyle Canning, are places where targeted action can have the most impact in terms of disrupting injustice and destruction and opening up possibilities for change. Actions that focus both on physical places and on what can be labeled the Point of Assumption allow campaigners to intervene in narratives and shift meaning. In doing so they help change the stories and beliefs around an issue to open up new political space.

The following Australian examples demonstrate how tactics such as reframing debates, offering new futures, and subverting and creating spectacles have worked in practice. To read an extract from Reinsborough and Canning’s book Re:Imagining Change: How to Use Story-Based Strategy to Win Campaigns, Build Movements, and Change the World which further outlines how the Point of Assumption can be used visit here.

Reframing Debates: ‘No Jobs on a Dead Planet’

A successful way of shifting the debate around an issue is to uncover the assumptions behind commonly used arguments and then reframe them. Those opposed to taking action on pollution, climate change and other issues critical to planetary and human health have time and again framed the debate as being one of “Jobs vs Environment.” By adopting the slogan “No jobs on a dead planet” unionists, environmentalists and others have challenged this false duality and brought attention to the need to transition away from destructive industries that create huge short term profits for the few, but deny health and prosperity for the many.

From the Green Bans to current climate justice campaigns, Australian campaigners have emphasized the fact that society cannot afford to put off change. In the early 2000s Victorian activists calling for an end to the clear felling of Victorian forests painted “No jobs on a dead planet” on the smokestack of the disused Lonsdale Power Station in Melbourne thereby gaining the attention of commuters and passers by for years to come. No Jobs on a Dead Planet graffiti, Melbourne 2003. Courtesy of Tom Civil

Campaigners can offer a vision for the future through actions that point the way in the present. Taking over empty and abandoned property and putting it to productive use, commonly known as squatting, has long offered a practical measure while embodying a future in which resources are focused first and foremost on social needs rather than profit.

In response to a post-war housing crisis, which saw a shortfall of 350 000 houses in 1945, families began squatting empty properties and former military bases, forcing Federal and state governments to provide emergency housing and toughen up requisitioning rules. One of the more famous cases of community action at this time was the 1946 takeover of a 20 room mansion in Kings Cross known as Maramanah. Originally slated for demolition, the occupation of the property forced the local council to turn it into a rooming house for the homeless.

This and similar actions not only challenged narratives around the homeless being helpless victims, and the crisis being an inevitable after effect of the war, but also symbolised a future in which collective action for social need could be prioritised over bureaucratic inaction and the right of speculators to let housing go to waste. The staging of public spectacles and mass media events has long been a tactic used by nations and corporations to polish their image, shore up support, and distract the public. Campaigners for progressive change also create spectacular actions to draw attention to issues and change the narratives around them. Sometimes this is through holding their own events, and sometimes through hijacking others.

Australian activists, including sportspeople, have long intervened in sporting events to create spectacles and controversies that have challenged racism, homophobia, sexism and other forms of discrimination within teams and competitions. Campaigners have also used actions to draw attention to the anti-social activities of sponsors and governments.

During the 2015 Australian Tennis Open activists brought the plight of refugees imprisoned on Manus Island to world attention by disrupting the men’s final. By raising banners and wearing t-shirts that read “Australia open for refugees” they also shared, via images that were broadcast globally, an alternative approach that would respect, rather than trash, human rights. Popular culture provides many opportunities for campaigners to repurpose well known characters, memes, metaphors, and cultural narratives to share messages and challenge assumptions. From lullabies to chartbusters, well-known song lyrics have often been rewritten to parody corporate and political villains. In some cases just adopting a song wholesale can be highly effective. During the run up to the Melbourne S11 protests against the World Economic Forum in 2000, organisers held a poll to select an anthem. Thanks to its cheesiness and lyrics, which include “This time, we know we all can stand together, With the power to be powerful” and “We’re not gonna sit in silence, We’re not gonna live with fear”, John Farnham’s ‘You’re the Voice’ was made the campaign theme song. A subsequent media uproar, and legal threats from Farnham’s management, provided the protest with much publicity while the singing of the song during blockading gave what had been vacuous ear candy real meaning. 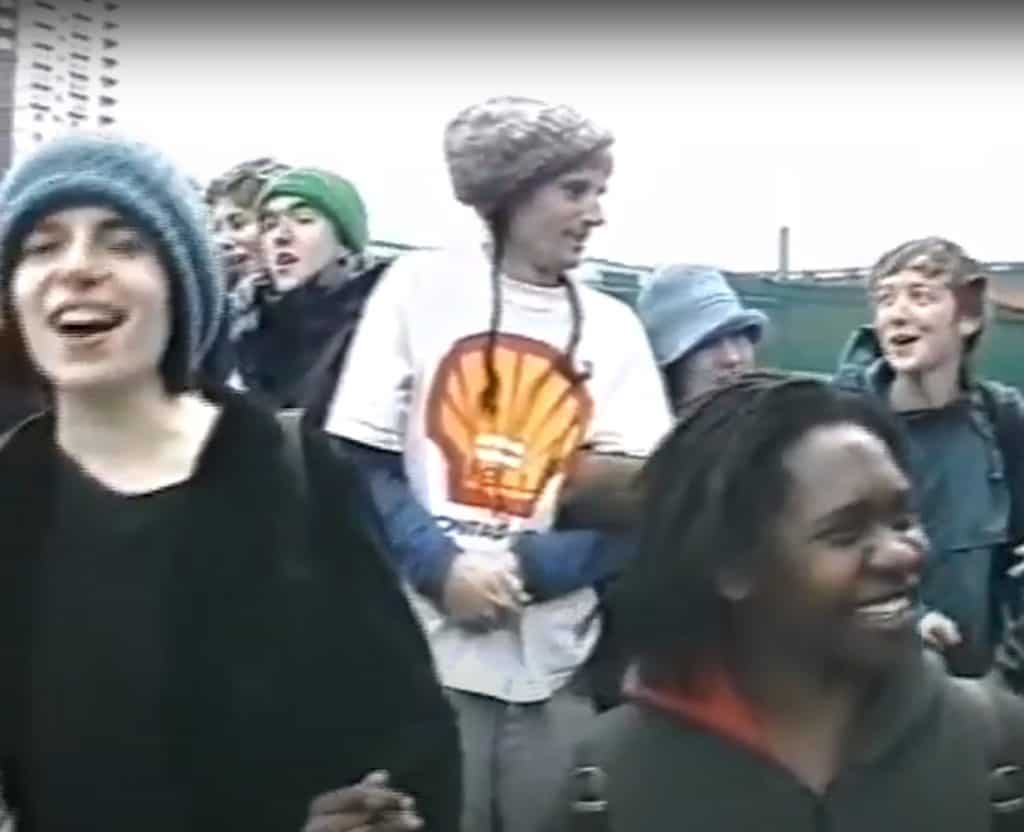 Assumptions can be challenged and transformed by simply bringing previously hidden, and deliberated downplayed, aspects to light. In the build up to the invasion and occupation of Iraq, peace activists and medical professionals exposed the reality of war. They lay in body bags in the Bourke Street Mall and outside the British Consulate-General Offices during the 2002 Christmas shopping spree. This street theatre drew attention to the loss of civilian lives in the previous conflict with Iraq as well as the presence of US warships, potentially armed with weapons of mass destruction, in Melbourne’s ports. Corporations and governments invest vast sums of resources into crafting and maintaining brands. Control of their public image can be difficult to maintain, opening possibilities for campaigners to associate them with activities and actions that perpetuate injustice and harm people and the planet.

Brand busting activities can also provide the leverage required to change policies, as was seen in recent years through the Australian climate movement’s focus on the Commonwealth Bank. Having loaned billions of dollars to thermal coal miners the company ruled out future investment in 2019, thereby placing impetus on other banks to follow suit. This only came after concerted pressure, which included rallying outside local branches, scorecards and other materials detailing the bank’s activities, divestment (people changing banks on the basis of climate), rebranding signs to read “Coal Bank”, revising billboards, dumping coal outside its headquarters, and rallying outside local branches.