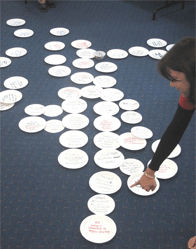 Participants in a Change Agency workshop lay out paper plates to plot a critical path.

A process guide to be used in training workshops and planning sessions to develop campaign strategy. Download a printer friendly PDF of this guide.

Step 1: Explain the process and the purpose of critical path analysis

Campaigns don’t win all at once – they win through taking successful steps. Being able to break down the steps towards winning is a key skill for successful strategising. This tool gives participants challenge and practice in setting stepping stones of achievements along the way and sequencing those towards an eventual win.

The basic concept is to have each person write down the outcomes they think need to happen for their campaign to be successful – not so much the steps or activities they need to do, but the changes that need  to happen for their hoped for changes to be made real. Since it is such a big challenge — so easy to be broad and unrealistic, not specific and realisable — this tool utilises (a) a physical set-up and structure (paper plates) to support clearer thinking; and (b) support from other participants in small groups; and c) debriefing midway to support clarity of outcomes.

First provide people with about ten minutes of quiet writing time. While everyone is in the circle together, ask them to close their eyes if comfortable, and think of an issue or problem they feel really passionate about. Now encourage them to take themselves to the time when the issue or problem is resolved somehow, the social or environmental changes they hoped for have been realised or the campaign they’ve been working on has won. Let them get a feel for it. What does that change look like? Feel like? Now what happened? Tell a story of how that vision came to be. What changes happened along the way that led to the positive social or environmental change. Ask people to record the five or six changes that needed to happen before their vision was made real.

Now put participants into small groups – groups between three and five work well. Have the groups spread out around the room. Ask people to share their stories with each other.

Then put in the middle of the room some symbol, like a bowl of fruit, and explain that this is the “vision.” It’s what folks are working towards – their specific (as opposed to broad) campaign goals.

Each participant will be given five to six paper plates (extras are available if needed). The task for each participant is to place paper plates starting from where they are now to their vision ( or working backwards from the vision to now), putting specific outcomes that are important “stepping stones” to that vision on the plates – this pathway does not have to be linear.

Someone working on a campaign to end the use of plastic bags in their state, might have as some of the stepping stones (1) “broad-based coalition of 5 action groups established and working successfully together to abolish the use of plastic bags,” (2) “regular statewide media publications present positive  news stories in newspapers and magazines,” (3) “people working in grocery stores and jobs that use bags, inform shoppers about the problems with plastic bags and urge them to say ‘No to Plastic Bags’, (4) “shoppers refuse plastic-bags on mass”; …and (5) “state government passes legislation to ban plastic bags”; and so on, until eventually they win their campaign. It’s always good to give a bit of a demonstration.

Each paper plate is one outcome that needs to happen for the ultimate campaign goal or social change vision to be realised. While most of those outcomes can be objectives that the organisation can work towards; a few of them might be external factors, like an oil crisis, that can help progress the movement’s goals.

The reason for having people in groups is that folks can bounce ideas off each other, get challenged about the clarity of each outcome, and get some feedback about the order of the steps, too. Acknowledge up front that it’s intended to be challenging.

Invite questions and clarify as needed.

(Note: If you’re using this tool in a group that’s all working on the same campaign/issue, you may want to adapt it so participants are creating the outcomes/plates together. Also, It may be a challenge to get the group to think in terms of bite-sized campaigns. While “economic justice for all” is a great vision, this tool is most effective when identifying outcomes with a clear scope, like “getting five affordable housing complexes built in five years time.” One way to support the group to get more specific is to allow the larger scope in an earlier exercise, by using tools such as with the Vision Gallery or Scenario Writing).

Allow groups to work, giving support as needed to get specific. Between 20 to 40 minutes may be needed for this part. Disagreement and discussion among participants is great here for learning. Facilitators should be very available for support, coaching, and as a resource. In particular, you need to watch out for people writing tactics or activities on their plates – we can’t help ourselves, we often focus on the things we are going to do, rather than what needs to change or happen. This tool is about outcomes – “what are we trying to achieve” or what needs to change” rather than “what are we going to do”. If you find people writing tactics on their plates, get them to flip them over and ask themselves, “what outcome are we working towards with this activity or tactic?”

Step 5: Debrief on what makes for good outcomes

Interrupt before most groups look finished for a quick check- in with how people are doing. Make a quick list of what qualities good outcomes have, what do people notice about the visions and outcomes they are constructing? In terms of framing visions, you might introduce the concept of “cutting issues”. Cutting an issue is about taking a big picture social or environmental problem and making it a specific, immediate and realisable issue that you can mobilise community around. Where a problem is a broad area of concern, e.g. pollution, racism and unaffordable healthcare, an issue is a solution or partial solution to a problem, e.g. green energy, affirmative action or national healthcare.

In terms of outcomes, you could introduce “SMART” objectives: Specific/strategic, Measurable, Achievable, Realistic, Time-specific. People can use SMART as a way of analysing their outcomes and reframing them as objectives that they can then develop strategy and tactics for. Do their objectives match those qualities?

Step 6: Give folks some more time to finish up

As people are finishing, you might move in to a break so that people can informally share with each other, spend part of the break finishing if they so wish, or just read people’s stepping stones that they created.

After the break, spend just a few minutes debriefing how that was for people. Invite people to consider the usefulness of what they’ve just done. You might have a couple of people demonstrate how they see their campaign winning through modeling the steps.

Download a printer friendly PDF of this guide. Download an MS Word template to fill in your own critical path.