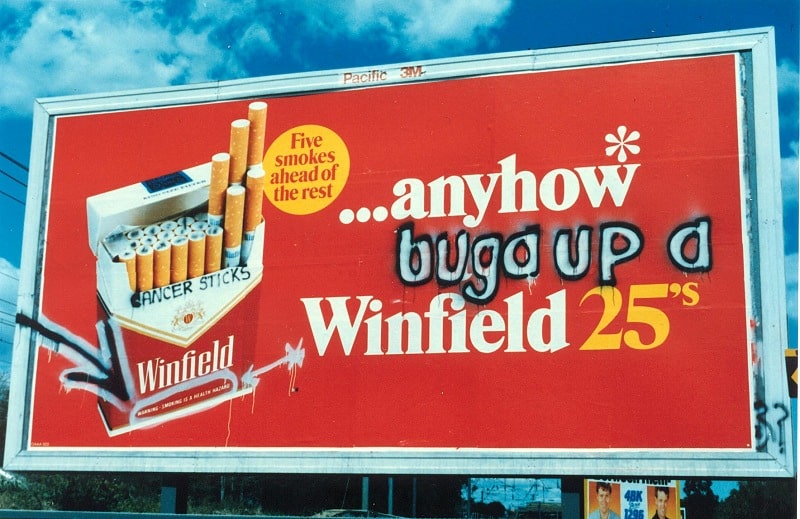 An example of Buga-Up's work on a billboard.

In the 70s and 80s in Australia, tobacco companies had free reign to advertise in nearly all media, and tobacco advertising was a visual mainstay throughout public spaces. In addition, the prevailing mainstream view considered smoking to be an issue of individual behavior change rather than policy solutions. Disillusioned by this, Professor Simon Chapman and three of his colleagues theatrically convened a public meeting in the lecture theatre of the city morgue. The first group that formed out of the meeting – Movement Opposed to the Promotion of Unhealthy Products (MOP UP) – went on to involve itself in the legal and medical side of fighting advertising.

However, two individuals present, Bill Snow and Rick Bolzan, decided to take more direct action against tobacco advertising. They founded the splinter organization Billboard Utilising Graffitists Against Unhealthy Promotions (BUGA UP), and quickly launched a ‘subvertising’ campaign against cigarette advertising. Subvertising—a combination of the words subvert and advertise—involves altering an advertisement to create cognitive dissonance and reveal a deeper truth. From October 1979 to September 1994, members cleverly ‘refaced’ (gave a new face to) tens of thousands of billboards across Australia, revised advertising slogans, and disrupted tobacco-sponsored events in order to reveal the effects of tobacco and create transparency in tobacco advertising.

Throughout the course of the campaign, the organization avoided formalizing itself with official memberships, or written aims and principles. It had no written identity or phone number, although it did maintain post box addresses for receiving financial contributions to the campaign, and operated a bank account as well. Members typically found out about the campaign through word of mouth, and ‘joined’ by signing targeted billboard ‘subvertising’ of their own with the acronym BUGA UP. Although some members attested to being aware of a core of 12-20 people, no one ever knew the full extent of numbers involved. This loose and informal arrangement remained deliberately so for legal reasons. However, people involved came from many walks of life. As the campaign website attests:

Individuals sometimes executed ‘subvertising’ and ‘refacing’ on the run. Other times, small groups planned night-long actions to change the messaging on hundreds of boards. Sometimes, sprayers wore white boiler suits to disguise themselves as workers and go unnoticed. Other times, individuals participated in fully open daytime actions in order to increase media publicity. At its high point of involvement, members changed at least 50 billboards per week. Members altered advertising slogans by using spray paint to blank out some letters and add others, and even used colors that would blend with the original so as to appear unaltered. Most of the time, it only took a few additions and deletions to completely change the meaning of brand names and slogans:

Graffiti artist ToFu recalls observing an altered billboard, attending a BUGA UP meeting, and then going out with several members after the meeting. The small group of individuals looked at billboards and discussed messaging options, after which two acted as lookouts while three executed the action. ToFu later took action to change the messaging on billboards near railway stations in Sydney. “One night I think we must have done 20, all along the railway line, from station to station, just following on.”

BUGA UP soon gained prominence throughout Australia and abroad, and received extensive media coverage in 1983, when Dr. Arthur Chesterfield-Evans presented on the campaign at the Fifth World Conference on Tobacco and Health in Canada. Over the course of the campaign, public feedback about the messages was positive, and BUGA UP members often received encouragement from passers-by who saw them in action. The changed billboards presented humorous and arresting anti-smoking messages to the average Australian, and made sure tobacco advertisements grew as a topic of conversation. Health groups came out denouncing tobacco and advertising industries, and conservative senior medical leaders livened up their lectures and presentations with BUGA UP images.

As BUGA UP’s ranks swelled and its activities spread, the advertising industry moved tobacco advertisement captions to the top of billboards, so that it would be harder to alter them with handheld spray cans. BUGA UP responded by assembling extension rods from broomsticks and angle brackets, replete with wire spray button triggers. When advertisers moved the messaging higher yet, members projected small, paint-filled balloons.

BUGA UP kept a fund that paid for half of the fines for people who signed billboards with the organization’s acronym. Also over the course of the campaign, between twenty and thirty members were arrested. Arrests and court cases acted as publicity opportunities. Media coverage was often positive, with space for comments from BUGA UP members about their position. While some pleaded guilty to charges in order to make statements explaining their motives, others, such as Chesterfield-Evans, elected not to plead guilty, arguing that “as a doctor, he found the intent and consequences of tobacco advertising equally reprehensible and felt justified in breaking what he argued was a trivial law in the hope of preventing diseases that would result from the success of tobacco advertising” (Chapman).

BUGA UPs public shame campaign against the tobacco advertising industry utilized tactics well beyond its billboard graffiti ‘subvertising.’ Lord Bloody Wog Rolo became active with BUGA UP in 1980 when he pressured Coles supermarket to discontinue a trial shopping bag carrying cigarette advertisements. Rolo repeatedly arrived at the checkout line with carts full of items, but then refused to leave the store with them once loaded into the cigarette-ad bags. In 1982, Rolo joined Bolzan in an action at a Philip Morris-sponsored art exhibition. The two locked themselves to a Marlboro-sponsored race car on display, while other BUGA UP members sprinkled the scene with cigarette butts. During an alternative advertising ‘award’ evening staged by BUGA UP in 1982, the organization presented an ‘Advertising Bogie’ award to a Sterling cigarettes ad involving marathon runners, which it then parodied by reproducing with an image of a legless smoker with Buerger’s disease. Also in 1982, when Philip Morris put on a search for a new Australian Marlboro Man, BUGA UP entered a wheelchair-bound man who smoked through his tracheostomy. A poster of the entry was put up on street lamps throughout Sydney, and appeared on the cover of the Medical Journal of Australia.

In 1984, BUGA UP skywrote “Cancer Country” above the courts during the men’s singles final at the Marlboro Australian Open tennis championship. The organization also set up an ‘embassy’ across from Marlboro’s advertising agency, and passed out leaflets. Later, members entertained for donations outside a tobacco-sponsored series of the Royal Philharmonic Orchestra as “The Royal Carcinogenic Orchestra.” On another occasion, BUGA UP wore tutus reading ‘Smokers are dying to bring you the ballet’ to a costume competition attended by socialite supporters of a tobacco-sponsored Australian ballet. In 1985, BUGA UP satirized the tobacco industry’s self-regulation group by establishing the mock organization Advertising Double Standards Council (ADSC), and published literature such as Self-preservation of Australian advertising containing statements like “If advertising standards are a good thing, then double standards are twice as good.”