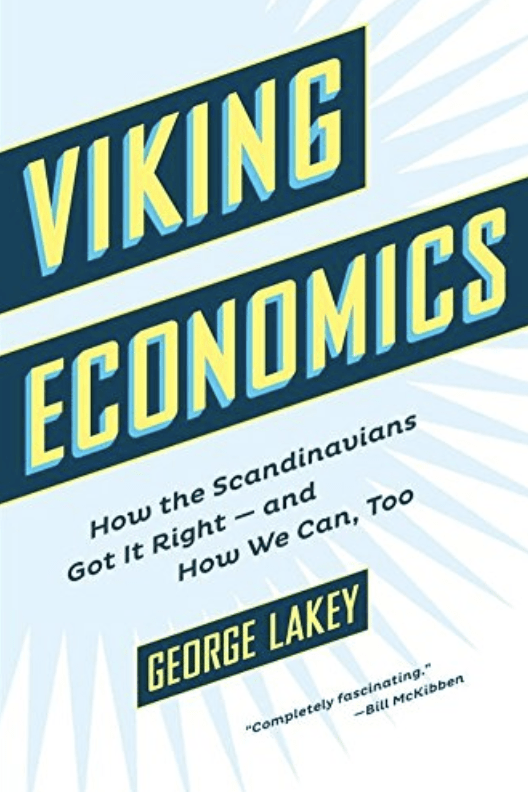 In this interview, George Lakey explains what lessons can be learned from how movements in Scandinavia won and secured their egalitarian economic model. This article was originally published on Waging Nonviolence.

In any social movement, it is important for organizers to have a clear and inspiring vision for the future world that they are working to build. In the struggle against rampant economic inequality in the United States and many parts of the world, no model is held up as a guiding light more often than the one built by Scandinavians. And for good reason.

As Waging Nonviolence columnist George Lakey explains in his new book “Viking Economics: How the Scandinavians Got It Right — and How We Can, Too,” at the turn of the 20th century the Nordic countries were plagued by poverty and gross inequality. The people then mobilized against their elite and won, after a long and fierce nonviolent struggle — creating space to design and construct some of the most equal, free and democratic societies in the world.

Given the danger that tangible successful alternatives pose, the Nordic model has long been under assault by free-marketeers, who argue that it is not desirable or applicable to the United States.

In engaging prose, and with many colourful stories, Lakey systematically debunks the many myths that are propagated to dismiss this compelling alternative, which against all odds has created full employment, universal health care, free education and virtually eliminated poverty.

In this interview, Lakey explains how social movements won and secured these momentous victories over the long haul, and what lessons activists in the United States can take from their example to re-energize their efforts here.

The social movements in Scandinavia in the 1930s were engaged in similar struggles and using comparable tactics to those in the United States at the time. Why do you think they were more successful in establishing an egalitarian system than we were?

The Nordics had advantages given to them by their historical situation, but success didn’t come easily. Most of the privileged resisted change. Troops were called out to repress the movement. Nazi movements grew, putting violent brigades in the streets to attack the movement. In the book, I share dramatic stories of people standing up against fascist aggression.

Here I’ll describe a couple of advantages they had, and also choices the movements made that made them unusually strong. They gave themselves assets that our movements could give ourselves if we want to.

History gave the Nordics several boosts. They were small countries on the periphery of where the main action was in those decades, which meant the stakes weren’t as high for international economic elites as in bigger countries on the continent like France and Germany. Being marginal can be an advantage!

It also helps not to be a rising empire, as the United States was early in the 20th century. In my book, I tell the little-known story of 19th-century Denmark as the last of the Nordics to surrender elite hopes for empire. That surrender gave more breathing room for the Danish majority to assert itself. In the United States, the economic elite was fighting for empire, as well as for internal dominance – high stakes!

The 21st century is very different. The U.S. empire is in decline and has no clear solutions to the problems it is facing (especially the climate crisis). In that way, the United States is becoming more like the Nordics of the 1920s and ‘30s, where the economic elites were failing to solve the structural challenges facing them.

Another historical feature that worked for the Nordics in the 1930s was that inequality wasn’t as entrenched there as in the United States, with our centuries of slavery. Our movements were severely hampered by slavery’s legacy and had a hard time resisting the elite’s strategy of divide-and-rule. Fortunately, more Americans are now coming to terms with the enormity of slavery and how it continues to hurt all of us today.

The Nordic history of cultural homogeneity helped them in the 1930s, although it became a hindrance to their economic development. Only recently have the Nordics diversified their population through immigration. Since 1995, the number of immigrants in Iceland doubled, then doubled again, and then doubled again! Sweden opened its doors to Syrians and others fleeing Middle East wars, accepting more per capita than any other country. One in seven Norwegians is foreign-born. In my book, I show how the Nordic economic model helps them to meet the present-day challenges of immigration.

And what choices did the Nordics make to take advantage of these favourable circumstances that movements today might learn from?

Despite their historic advantages, the Nordic movements could have failed if they hadn’t generated additional muscle. They chose to embrace a vision of what they wanted to see. Although there was never complete agreement among activist groups, their vision provided a rough unity that attracted support from people on the sidelines who were hesitant to join, thus building a mass movement. It inspired participants to step up to greater commitment and bolder action.

Their platform, informed by brilliant economists like Gunnar Myrdal, was not fantasy. The vision spread via study groups, movement media and street speaking. By focusing on what they did want instead of what they didn’t, their vision struck a positive tone at a dire time of deep depression and violent attacks. We can expect harder times in this country, and would be smart to fortify ourselves with a tangible platform for support as we lurch from crisis to crisis.

The Nordics strengthened themselves by choosing nonviolent campaigns rather than protests. Protests express a point of view, including outrage, and are the default of many activists around the world. The Nordics were more interested in building power than in simply expressing themselves, and chose nonviolent direct action campaigns to maximize their power. They chose a target, defined one or more demands, and escalated their actions strategically. Multiple campaigns built the movement. Campaigns experienced losses as well as wins, but the overall result was both growth and power.

Because campaigns produce a learning curve, they grew the activists that would one day be able to build the institutions of a new society. Campaign participants became the leadership of the country. The first non-capitalist Danish prime minister had been a factory worker who participated in campaigns and learned leadership skills in the labor movement. The Norwegian prime minister for 17 years in the crucial years of mid-20th century was a construction worker, Einar Gerhardson.

What role do cooperatives play in the Nordic model, and how do you see them fitting into a strategy to roll back economic inequality?

Organizers of coops joined the power of direct action by prefiguring the new economy sketched in the movement’s vision. Coops generate skills and confidence among the previously disempowered. In Denmark and Iceland the cooperative movements were crucial in developing their modern economies. Economist Thorvaldur Gylfason told me that Icelandic coops later in the last century made mistakes that weakened them, but are now making a comeback.

The Swedish coop Folksam represents today’s continued Nordic growth trend. The 106-year-old insurance coop grew by aggressively marketing to immigrants to Sweden, who make up over one in six in the population. Folksam set up a multilingual call center over a decade ago that now handles calls in 17 languages, including Somali, Farsi, Arabic, and Kurdish. Folksam claims the lion’s share of the insurance market in growing immigrant communities.

Over two million Norwegians are coop members, and many of those belong to several coops. Forty percent of the housing in Oslo is cooperative. Virtually the entire dairy industry in Norway and Denmark consists of coops. In addition to economic clout, coops exert power in the Nordic countries by giving daily evidence – despite neo-liberal claims – that cooperation works as well as, and often better than, capitalism.

Public ownership also plays a giant role in Norwegian corporate life. Most major corporations are over 50 percent owned by the public, on a municipal or national level. Norwegians were the only Scandinavians to strike it rich in oil, but when they did, they set up a public company to own and run the operations, setting aside the profits for a public “pension fund” to benefit future generations.

Of course, Norwegians today passionately debate whether to end their fossil fuel extraction. Before the oil wealth became available, Norway had already virtually abolished poverty, so Norwegians’ shared prosperity is not at stake.

How did the movements secure the gains won in the 1930s over the decades that followed?

The Nordic class struggles continue today, with resulting wins and losses. In comparing the outcomes among the four countries, a strategic principle stands out that yields hope for our movements.

Ever since the “Reagan Revolution,” most U.S. progressives have played defense. The result has been a string of losses, and the suffering is immense. Similarly, among the Nordic countries losses came when progressives tried to defend previous achievements. The wins happened when the movement instead went on the offensive and waged nonviolent struggle with bold demands.

In the 1980s, the Swedish and Norwegian governments loosened regulations on banks. Private bankers went wild, speculated on real estate, created a bubble, and both countries headed for the cliff. (Sound familiar?)

The governments woke up, seized the biggest banks, fired the senior management, made sure the stockholders didn’t get a cent, and told other banks they could re-capitalize on their own or go bankrupt; they would not be bailed out by the taxpayers.

The near-collapse hurt the economy of each country, but the decisive nationalization of the big banks plus bold stimulus programs created a faster rebound than we’ve seen in the American and European recoveries after similar bubbles burst in 2008.

In the book, I tell the dramatic story of Iceland’s later financial collapse and how the nonviolent people’s movement forced an even more remarkable rebound than that of their Viking cousins.

Significantly, the Danes dodged that wild-banker bullet. Rather than follow Norway and Sweden and allow the Danish government to move to the right, the labor movement went on the offensive, waging a disruptive strike, blockading parliament, and making bold demands to benefit the majority. By pro-actively defying the European neo-liberal trend, the Danish financial sector remained solid.

How does the struggle for the Nordic model continue today?

The Nordics are the first to say they’ve not achieved utopia. Norwegians tell me they are “a nation of complainers.” The four countries in my book continue to face enormous global market forces, with daily pressures to give up the clearest sustained model of democracy, equality, environmental justice, shared prosperity and individual freedom in history.

I don’t know if the global elite will find the means to stop them from holding up the high standard they’ve achieved. I do know that the Nordics love strategy, and like to learn from each other. They may defy the global elite by choosing to fight by staying on the offensive and waging nonviolence.

Building on the vision projected by the Movement for Black Lives, U.S. movements might also gain the confidence to go on the offensive, wage strategic nonviolent campaigns and build power. Because our objective situation is now in some ways more favourable than in the 1930s, we might surprise ourselves with what we can do.