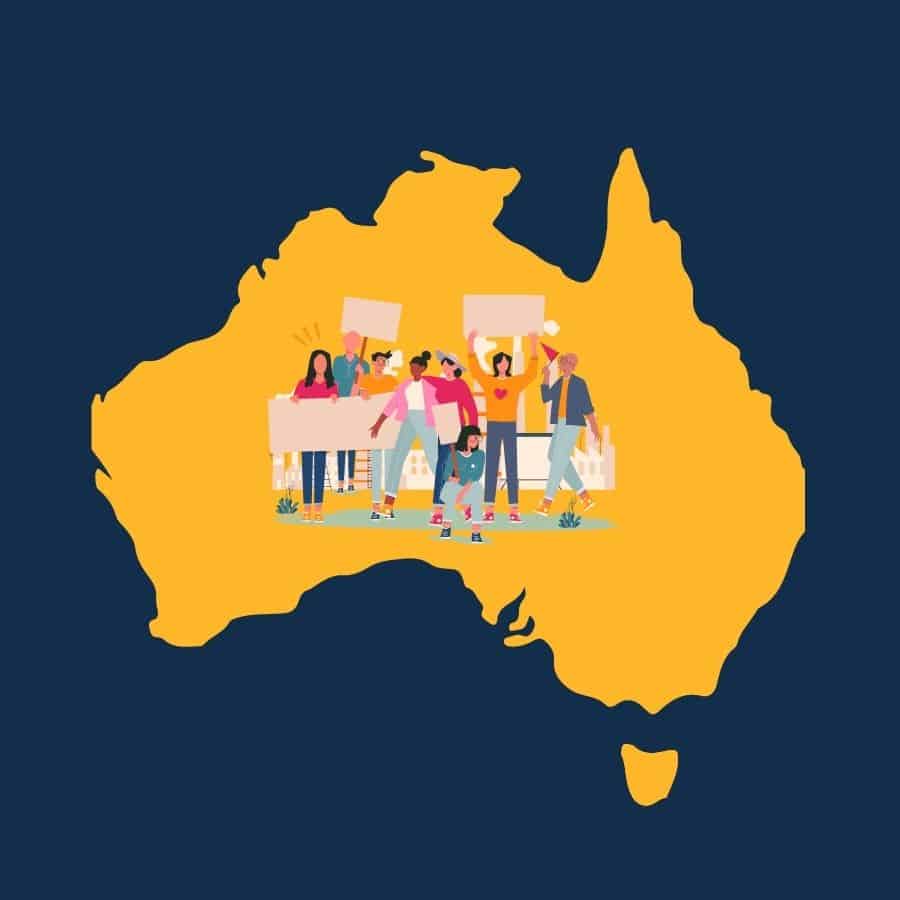 A detailed examination of the Australian environmental movement demonstrated that in 2017 there were 497 groups undertaking environmental activism, almost half of which focused on conservation issues and worked at a local scale, while collectively running 960 different campaigns.

The first question we wanted to examine was how many groups were involved in environmental activism in Australia. To do this we created a large database of 2,688 groups gathered from sources such as the Australian Register of Environmental Organisations, the member lists of umbrella organisations such as Conservation Councils, and links contained on each environmental group website. We then looked individually at each group to see whether it had a website, and whether it stated that the group was engaged in some form of environmental activism.

We found 497 environmental movement groups that fit these criteria. We then read through all of the website text for each group to identify their key characteristics. This followed a detailed methodology; contact the author for the full paper or download the data on the Open Science Framework.

What did environmental groups focus on?

Almost half of groups in 2017 focused on conservation issues and worked in local areas. 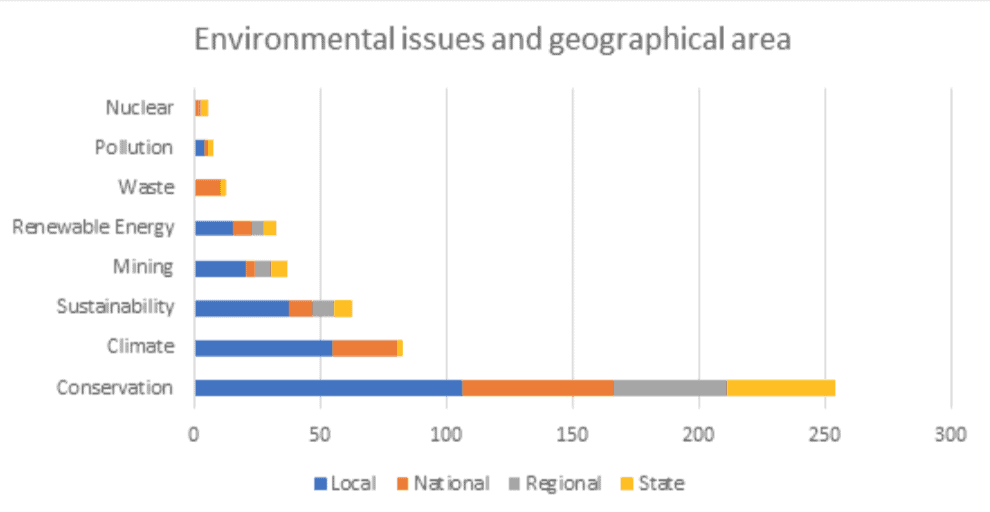 At the time no groups said they focused on environmental justice.

What campaigns did these groups run?

A total of 960 separate campaigns were listed on the websites of the 497 groups. Almost two thirds of these campaigns were run by groups that focus primarily on conservation issues. Examples include the ‘National Kangaroo Campaign’ by Australian Wildlife Protection Council, which seeks to ‘bring an end to the commercial kangaroo killing industry’, and the ‘Save the Reef’ campaign listed by Greenpeace Asia Pacific.

Only 30 campaigns were listed on more than one website; for example, three groups listed the ‘Fight for the Reef’ campaign and two highlighted their work on the ‘Forests for Life’ campaign. While many groups share campaigns, this finding indicates that few groups ensure that shared campaigns are communicated to supporters on their websites.

Who did the campaigns target? 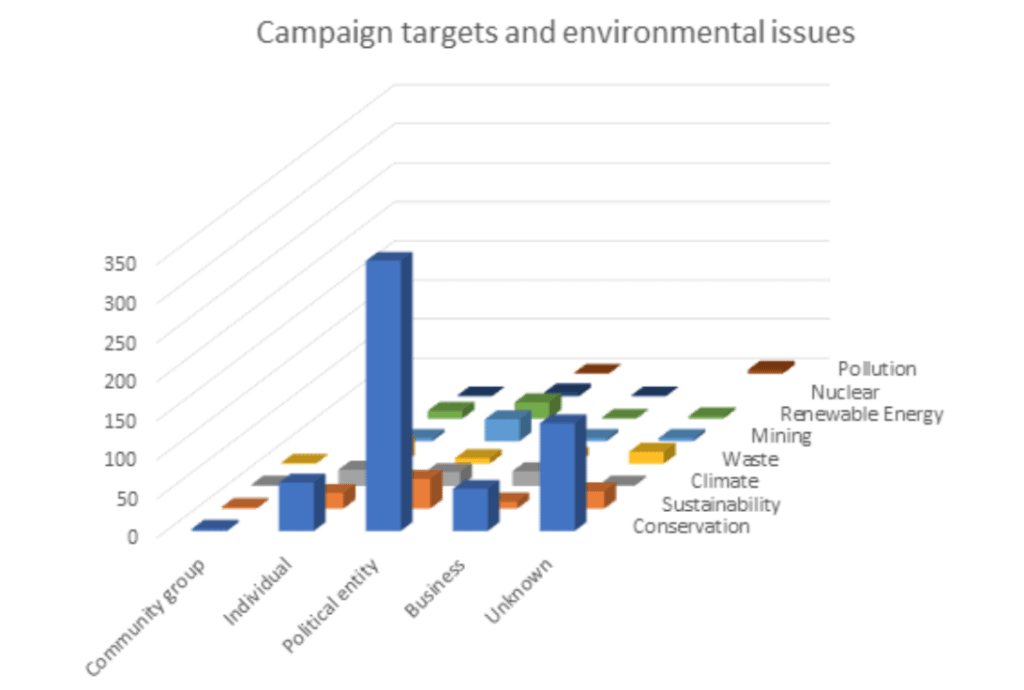 We also looked at the goal and target for each campaign. Just over half of all campaign targets were political entities, such as State governments and individual politicians. This was not consistent across all groups though; groups which focused on climate change, renewable energy and sustainability issues more often targeted individuals or business entities. Many campaigns did not clearly state what their goal or target was. Campaigns that targeted individuals – such as household energy reduction campaigns – will be unable to be assessed in later years to see whether they were successful.

Of course, this data only reflects the information that was included on each group’s website. Some groups do not have the resources to update their website frequently, nor fully include all the details of each campaign. Even so, it is striking how remarkably active the Australian environmental movement is, and how much work it is doing across a range of environmental issues and locations.

What activities did these groups do?

The last characteristic we captured data on in this project was the activities that were promoted on each website. Many websites had an ‘Events’ page, or listed activities they were engaged in. We recorded each of these and then categorised them into five different event types: actions (such as rallies), meetings (such as AGMs), information sharing events (such as seminars and film screenings), eco-activities (such as tree planting events) and social/fundraising events.

Table one shows the range and frequency of offline events. The most common type of offline event was an information sharing activity. These include examples such as the “You, Me and Biodiversity Workshop” (Wombat Forestcare Inc.), and “Public Meeting on Rocky Hill Coal Project” (Groundswell Gloucester). Following this, 30% of groups advertised an eco-activity, such as clean up events, bushcare working bees, and ﬁeld surveys.

We also looked at the online actions (namely petitions and template submissions) and requests listed on each website. Table 2 shows that 37% of groups included a petition or online action on their website. A total of 56% of groups asked for a donation, while 41% included a sign up button for volunteers.

Why does this matter?

It matters because as Ripple and colleagues (2017) stated in the Second Warning to Humanity, vocal grassroots activism generated by people centered in local communities may be essential for convincing power holders to take action on the global environmental crisis.

In addition, researchers, activists and observers have long noted how a diverse and active movement may be more likely to reach out to different constituencies to build stronger support for their cause. Our data shows that the Australian environmental movement may be meeting these requirements because:

How can groups improve their messaging?

Our findings also point to areas where environmental groups could find efficiencies in their activities and improve how they convey their messages. This can be done by:

The link to the full article, The characteristics, activities and goals of environmental organizations engaged in advocacy within the Australian environmental movement, can be found here (behind an academic paywall). The authors are more than happy to share a copy; please contact Robyn on [email protected]

You can find further information related to this paper here: