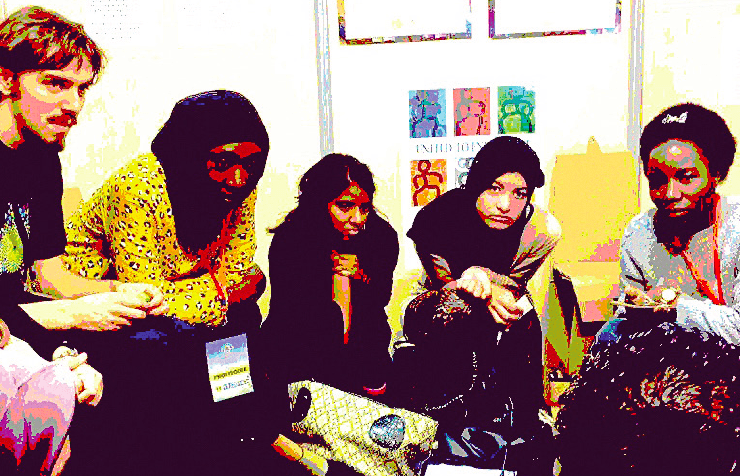 Young people at a Sustaining All Life event.

By Sustaining All Life

NB We refer to people age 21 and under as young people.

Young people are powerful agents of social change. They are playing vital roles in the climate movement. They have the power to make change. Backing young people to take action is among the most important work adults can do. Young people are a frontline community with regard to climate change—many young people, world-wide, are already living through the challenges of the climate crisis and will face it throughout their lives.

Adults can be effective allies to young activists by supporting them in what they need and ask for. They can counter the oppressive messages that young people are not fully intelligent or capable until they “grow up.” Unchallenged, young people’s oppression leaves many of them with the incorrect idea that they are not smart or powerful. Adults can stand against this oppression. They can encourage young people to think and take action. They can take young people’s leadership seriously.

It is particularly important that adults don’t “pass on” to young people the discouragement and fears we have accumulated over time. We want young people to be free to try every action they can think. They should not have to listen to our worries or our “improvements” to their ideas.

Young people are fully intelligent. They are capable of understanding complex ideas. It is essential that we communicate directly and honestly with them. We also get to figure out how to talk about climate change while laughing and having fun—two things that young people are especially good at.

We need to talk to young people about the realities of climate change and its consequences.

It may be scary to do this. but we can’t hide this important information from them. They are going to be alive and living with the climate emergency for many more years. Almost all young people understand that things need to change and that it is important to take action against injustice.

When talking to groups, particularly groups of young people, it is helpful to do the following:

It is important to understand that climate change can be stopped. Hundreds of thousands of people, many of them young people, are taking action every day throughout the world.

Make sure that young people have access to information about youth activism and international movements of young people—the Sunrise movement, the Extinction Rebellion, the youth climate strikes, and more. Show videos of these young people doing powerful things; these stories inspire others to act.

As adults, we sometimes try to fix or take care of everything. We often tell young people what to do. We lecture them, express our doubts, and discourage them from taking certain actions. Though understandable, this is generally not helpful. There isn’t time to get everything perfect—and it’s not necessary. We need to try everything we can think of, apologize for mistakes, and keep trying. Young people appreciate that.

Defending Young People Against Criticism Based on Their Age

Whenever young people dare to be powerful and speak out, there will be adults who try to shut them down. The following statements (among others) are often used to discredit their efforts:

We need to recognize others’ attempts to discredit young people’s efforts, or when we ourselves discredit them. Greta Thunberg, a young Swedish climate activist, said, “The rules are not working, so it’s time to change the rules.” Young people often know how to break rules and agitate for change.

We can do the following when an adult attempts to discredit young people or attack their efforts:

We need to radically transform society in order to combat climate change—and this will take all of us. All of our skills and talents are needed. Adults and young people can act as a united front.

People often don’t organize until things are desperate—and they are desperate now. Young people understand that. When they are cared about, given accurate information, and supported—they act.

Download a full printer friendly version of this article from the box at the bottom of the page. This handout was distributed at the UN Climate Summit in New York City in 2019.