Since the first days of invasion and dispossession, securing basic access to shelter, food and other necessities of life has been a recurring struggle for many Australians. This set of resources focuses on case studies and stories of how communities have organised to secure housing, financial and other support for the unwaged and those on low incomes. The campaigns detailed here exposed the structural issues at the root of poverty and homelessness and forged community power and solidarity in response to them. In doing so they challenged negative and paternalistic myths which ‘blame the victim’. They not only provide inspiration, but also point to tactics, strategies and approaches that can be adapted and applied during the current economic crisis.

The Renters And Housing Union (VIC) is a member-run organisation of renters and people in precarious housing which organises collectively to fight for the right to safe and secure housing through self-advocacy, education, and frontline eviction defence. Amongst other resources this webpage includes information about a rent strike they organised and a guide to negotiating with real estate agents and landlords for rental reductions.

Housing Defence Coalition – Sydney are a coalition of Sydney organisers on stolen land, committed to campaigning for housing justice from below and to the Left as working folks face increasingly precarious housing amidst the COVID-19 pandemic. This article discusses a successful action they carried out which prevented an eviction in April 2020. For more about what the coalition is currently up to visit their Facebook page.

In this interview conducted as part of the Logan based Beyond the Rona series, SEQUR organiser Andrew Tiggjan discusses how the union came together in 2021 to leverage the collective strength of renters.

How We Stopped An Eviction

In this article Greens councillor Jonathon Sri discusses how Brisbane activists mobilised during 2018 to prevent the eviction of a family from public housing. A combination of individual and community lobbying, as well as organisation for a blockade, forced the authorities to grant them a new lease.

The economic depression of the 1930s saw thousands of Australians thrown out of their homes and into the streets. This pamphlet chronicles a cross-section of the hundreds of pickets, occupations and protests that were organised to successfully disrupt and prevent evictions and auctions. The ‘Rental Histories Tour’ is the product of research and design by Hannah Garvan and explores tenants’ experiences of the Great Depression and post-WW2 housing crisis by visiting locations of significance around so-called ‘Brunswick’, alongside the voices of those with firsthand experience. Her aim is to demonstrate how key elements of ‘renting’ materialised throughout these periods, such as affordability, eviction, housing conditions, tenant-landlord relations, and the role of the state. By emphasising physical locations and eyewitness testimonies, Hannah sought to employ ‘Brunswick’ as an insightful case study to provide listeners with a deeper understanding of renters’ experiences in the past and present. Alongside the knowledge that Aboriginal Sovereignty is ‘grounded in [this] territory’, she also used Engels’ 1872 text ‘The Housing Question’ to inform her interpretation of property relations. Having examined various instances of housing activism, Hannah argues that acts of resistance which occurred in ‘Brunswick’ are correlated with specific outcomes, including the first Victorian rent relief scheme and the establishment of the Victorian Housing Commission. Read more

During the twentieth and twenty-first centuries individuals, collectives and sometimes whole movements in Australia have taken over abandoned and disused property and put it to socially useful ends. This has been widely labelled “squatting”. Following World War 2 Australians faced a shortage of up to 350 000 homes. This page features a transcript of a talk, originally given by Iain McIntyre at the Australian Society for the Study of Labour History conference in 2019 and later broadcast on Community Radio 3CR. It discusses how activism, including the squatting of empty houses and military camps, forced federal and state governments to provide emergency shelter.

This article discusses the squatting of a 20 room mansion in Kings Cross in 1946. Originally slated for demolition, the occupation of the property and a community campaign forced the local council to turn it into a rooming house for the homeless. A squatter entering the Maramanah mansion in Kings Cross before its council owners were forced to turn it into a rooming house during 1946. Image courtesy Mitchell Library, State Library of New South Wales and ACP Magazines Ltd.

A Condensed History of the Block in Redfern

During the early 1970s Redfern’s Aboriginal community ran a concerted campaign against moves to evict them from the area. This eventually resulted in the winning of federal funding for the purchase of homes in the “Block” through the Aboriginal Housing Company. This webpage, part of an extensive online Koori history archive collected and compiled by Gary Foley, includes dozens of articles, oral histories and studies regarding the era and the struggles that followed. 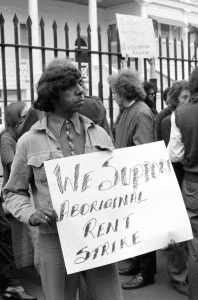 The Story of the Victoria Street Squats

From 1973 onwards Victoria Street in Kings Cross became the focus of a long running struggle against the removal of working class tenants from the area. This article details how residents, unionists, squatters and others came together to defy and delay the demolition of the street and the destruction of its community.

In this interview Ian Millis discusses the highs and lows of resisting thugs, gangsters, police and the NSW government during the Victoria Street campaign. Squatting in Sydney and Brisbane during the 1970s

In this talk three former squatters discuss how the occupation of disused properties in Brisbane and Sydney during the 1970s not only provided housing, but also supported community defence against real estate speculation and demolitions for road building.

From 1972 onwards residents and supporters in Brisbane resisted the compulsory purchase and demolition of housing to enable freeway construction via squatting, union bans, picketing, protests and other means. This blog post discusses the nature of the coalition involved and lessons that can be drawn for activists today.

Becoming extra-legal, squatting inside and beyond the law

In response to the wave of action against waste and homelessness that occurred during the 1970s and 1980s the New South Wales government employed and updated various laws related to trespassing and evictions. This thesis provides a history of campaigns that occurred in Woolloomooloo, Pyrmont, and Glebe and examines how squatters responded to attempts to keep disused properties empty.

Housing Activism in Melbourne from the 1970s Onwards

These two episodes from Community Radio 3CR’s Raise The Roof program feature interviews with long term advocates and activists from the Housing for the Aged Action Group. They discuss their experiences of campaigns by tenants during the 1970s and 1980s, and since, for security of tenure. Within this they canvas eviction resistance, direct action and the vital role of working class women in struggles for housing justice. Listen to each episode: Public Housing Activism Then and Now and Jeff’s Last Hurrah.

This pamphlet documents and evaluates the history of the Tenants’ Union of NSW, from 1976 to its twentieth anniversary in 1996, including its involvement in rent strikes, advocacy and numerous campaigns. It also includes some early history regarding struggles for rent control and to obtain basic protections for tenants.

Anatomy of a Rent Strike

An account and analysis of a tenant led rent strike in Fairfield, Sydney during 1986 which successfully forced a landlord to engage in repairs and withdraw eviction notices he had issued in reprisal.

For over five months in 2008-09 50 students took over disused property in Carlton, Melbourne. This talk provides an account of the SHAC campaign, which not only directly provided housing, but also raised issues regarding student hardship and homelessness.

The Australian Unemployed Workers Union is an independent and unfunded national volunteer organisation run by the unemployed, for the unemployed. It is dedicated to protecting the rights and dignity of unemployed workers and pensioners through a national advocacy hotline and campaigning work. Their website includes information about the rights of those receiving Centrelink payments, analysis of the causes of unemployment and solutions for it, stories from unwaged people, and information about how to get involved in various campaigns the union is running.

Wrong Island: Interview with the AUWU

In this podcast the Wrong Island crew talk with Alex North, National Coordinator of the Australian Unemployed Workers Union. Includes discussion about the woeful level of unemployment benefits pre-coronavirus, the long history of unemployed workers movements in Australia and prospects for fighting back in this radically transformed situation.

The Anti-Poverty Network QLD is an all-inclusive community organisation that aims to highlight and work against poverty. This article from 2018 discusses their approach towards campaigning for welfare justice and the support they provide communities. For more recent information on their work visit their Facebook page.

In 2014 the Melbourne Campaigners’ Network held an event on Anti-Poverty Organising in Australia to gather insights from the history of unemployed activism. This page includes an overview of the history of Australia’s welfare system, followed by oral histories from those active in unwaged issues from the 1980s to 2000s. Unemployed rally prior to the occupation of the elite Melbourne Club on November 12 1982. Courtesy of Jeff and Jill Sparrow.

These four chapters from the Radical Melbourne 1 & 2 books chronicle demonstrations, pickets, eviction resistance and occupations carried out by unemployed people in the Melbourne CBS during the 1900s, 1930s and 1980s. These two audio tours visit the sites of some of the fiercest unemployed battles in the Melbourne suburb of Brunswick. They chronicle the depredations that working class people experienced and the pickets, occupations and protests they organised to demand jobs, housing and welfare. Each can be listened to whilst walking around the suburb, or at home as a podcast.

This episode of The People’s History of Australia podcast features a conversation with author Nadia Wheatley, who as a student in Sydney in the 1970s undertook path-breaking research into the UWM. Nadia talks about what led her to research the UWM, how the UWM organised, what it fought for, how the authorities reacted to its activities, and what it won. A link to the thesis is included on the webpage.

As a member of the Unemployed Workers Movement and the Communist Party of Australia Jim Munro was involved in many campaigns against poverty and homelessness in and around the inner city of Melbourne during the 1920s and 1930s. This first-hand account of how a movement for dignity and survival was built from scratch is a transcription of a talk he gave at the A-House in 1990.

In this extract from Radical Perth, Militant Fremantle Alex Salmon describes conditions for unemployed workers in Perth during the Great Depression, the repression they faced, and the protests and tactics they used to fight for their rights. Unemployed protest in Sydney outside a Liberal Party fundraiser, 1979 Courtesy of Search Foundation.

Working for the class: The praxis of the Wollongong Out of Workers’ Union

Primarily active from 1983 to 1989 the Wollongong Out of Workers (WOW) Union campaigned for welfare and work rights with its squatted headquarters supporting unwaged people through the provision of a drop-in and welfare rights centre, soup kitchen, library, layout and graphics workshop, dark room, recording studio, accommodation and food cooperative. WOW also produced and distributed a monthly newspaper and organised concerts, film shows, public meetings, education classes and courses. This history and analysis by former member Nick Southall describes how the union came together in the context of economic downturn, organised itself on a grassroots and non-hierarchal basis, and linked in with other campaigns and movements in the region. It also touches on much of the other unwaged organising that was going on around Australia at the time.

Interviews with members of WOW—the Wollongong Out of Workers’ Union

Interviews with two WOW members about how they became involved with the union, what it did, and their ideas around work refusal and class.