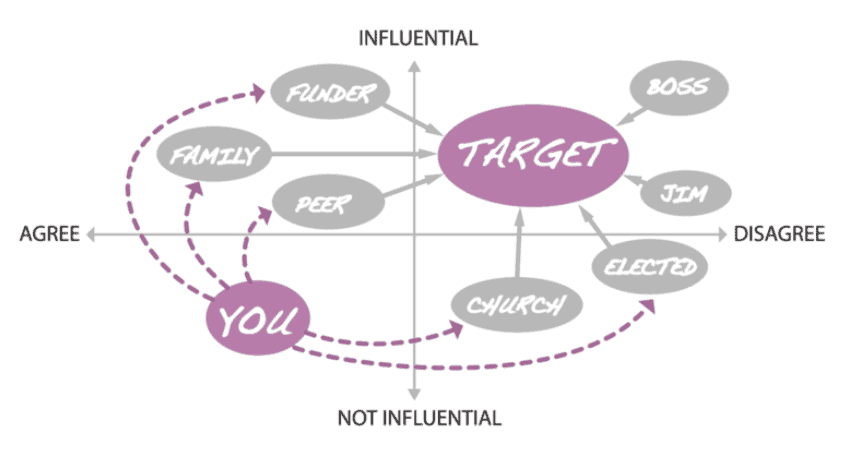 Map the power dynamics at play to identify your primary target and design a winning campaign strategy. This article comes from The Beautiful Trouble Toolbox, a platform for making it easier for people to take creative action for social justice.

The most common way people give up their power is by thinking they don’t have any. – Alice Walker

It is difficult to pinpoint the exact origins of power mapping, but the tool has been used widely in advocacy and campaigning since the 1980s.

To win a campaign, you need to correctly identify who has the power to fix the problem you want fixed. Then you need to pressure them to make the right decision. Power mapping is a tool to not only identify who holds that power, but, crucially, who holds influence over that person, and, therefore, who to target with your direct actions and campaign activities (see: PRINCIPLE: Choose your target wisely). A power map, properly done, can reveal these relationships and power dynamics and help you design a winning strategy for your campaign.

Let’s say a Canadian mining company is trying to extract minerals from the land surrounding your community in Mali. As a result, the land is getting polluted, seriously affecting your family’s and neighbors’ health. Who do you target? The company? And if so, do you target the regional director in Mali or the international CEO in Canada? Who ultimately has the power to close the mine? And what kind of power can you leverage to make them do it?

Doing a power map of the whole situation can help you answer these questions. It might tell you that you shouldn’t, in fact, target the company because you won’t be able to build enough direct leverage over them. Instead, the power map might indicate you should target the Malian government — to pass a law, or insist on a clean-up. But who exactly? Everyone from the local mayor up to the President has some degree of power in the situation, as well as varying degrees of influence over each other. A power map can help illuminate these relationships and suggest the best way forward.

A power map, properly done, can help you design a winning strategy for your campaign.

You may find, as the farmworkers who organized the Taco Bell Boycott did, that even after correctly identifying your target, and campaigning against them for a while, you can’t mobilize enough power to directly pressure them to fix the problem. That’s when you need to focus your energies on pressuring what are called “secondary targets” — power-holders who can influence your primary target. If they feel enough pressure from you, they’ll lean on the primary target to give into your demands. Power mapping helps you draw all the lines of influence between your primary target and all the other stakeholders involved — including you.

Step 1: Identify the problem you are trying to fix.

Expand your knowledge until you have a broad understanding of the issue and the forces involved.

These stakeholders generally include:

You’ll end up with a long list of institutions (both formal and informal), organizations, influential people, media, and assorted individuals that are relevant to your issue. Keep this list handy! 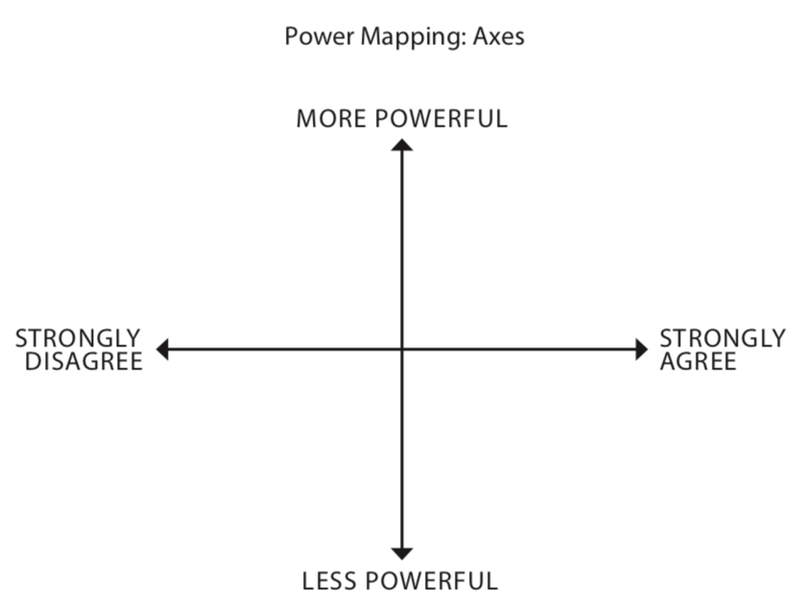 Power Mapping: Axes. How much power does each individual on your list have over the issue and how strongly do they agree or disagree with your stance?

Step 4: Plot where all the stakeholders stand.

Draw out a version of “Power Mapping: Axes” on a board or big chart paper. Put each stakeholder on its own post-it. Then, depending on how supportive they are, and how much power they have over the issue, you can place them on the board.

This is the point when you figure out who has the most influence over the issue and who is most likely to give you what you want. The perfect target (and perfection rarely exists in real life) would be both very powerful and already supportive (or at least easily accessible and open to supporting you). The hardest target to move, but the kind you will often face, and be forced to take on, is someone with a lot of power who strongly disagrees with you. (If you can’t decide on a single primary target, but only have the capacity to focus on one, proceed to the next step with your most likely candidates. The next step looks at your proximity or potential to reach each target, and may help you choose which one is best to focus on.) 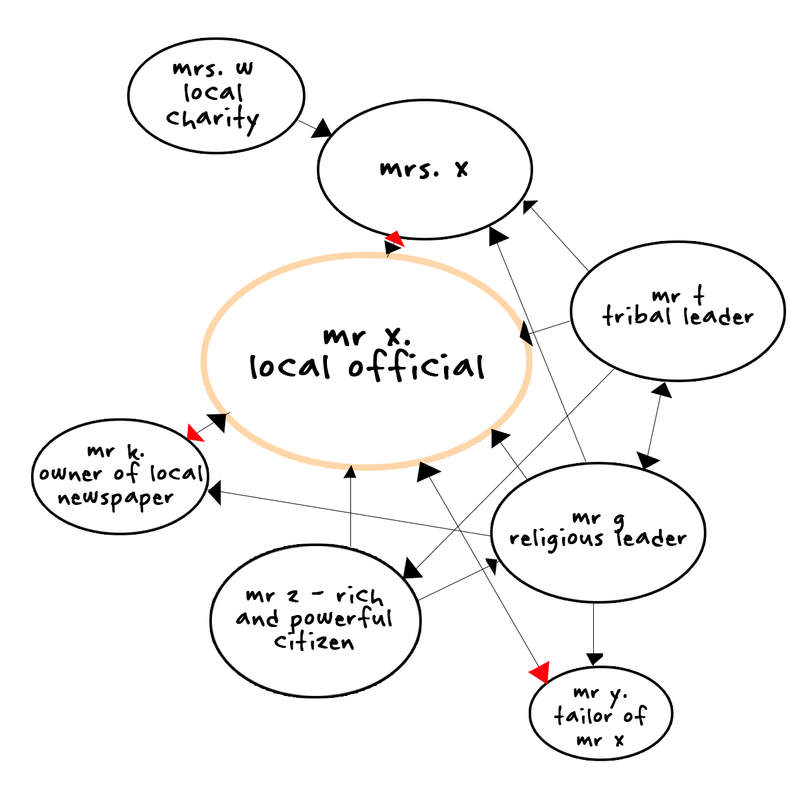 Power Mapping: Relationships. A simple power map detailing who has influence over “mr x” the local official (black arrows) and who “mr x” has power over (red arrows).

Step 6: Map the power relationships around your primary target.

Take the post-it of the stakeholder you’ve identified as your primary target and place it in the middle of another big sheet of paper. Are they influenced by any of the other names you have written down on the post-its? Who can sway them? Arrange the other stakeholder post-its on the big paper in relationship to the key target. Draw circles and arrows of relationship similar to “Power Mapping: Relationships.” Make sure to include yourself and your potential relationship to all stakeholders in this diagram whenever possible.

Step 7: Map the power relationships around your secondary targets.

You may not be able to move your primary target directly. The only way to get to them is through other stakeholders you’ve identified in Step 6 who have some influence on them. These are your secondary targets. But who are they influenced by? To find out, make a separate power map for each of these stakeholders. Power mapping can be meticulous work! Again, include yourself and your potential relationship to anyone on this diagram so it is clear how to proceed with campaign planning.

Step 8: Use this analysis to plan your campaign.

Now, make sure to actually use this research and analysis to create a plan that targets those who can actually give you what you want, rather than just the people you can reach easily.

At key campaign junctures, and as power shifts or you learn more about who holds it, revisit and revise these maps as needed. You’ll know when!

People come and go, and the power landscape constantly shifts, so you will need to periodically revisit and revise your power map to maintain a current and accurate picture of the power dynamics your campaign must navigate.

Also, structures of power not only vary across time, but can also vary from place to place — so don’t assume that the same problem will have the same power map in two different geographical areas. You need to spend the time to make sure your map is detailed and accurate.