“It was important to have stood up and said this is not right”, unionist Arthur Clarke reminisced in 2011 of the stand the trade union movement took for Aboriginal rights during the Noonkanbah dispute of 1979-80. The support of the labour movement caused a political crisis for the Western Australian government, resulting in blockaded roads, unionists arrested, truck drivers refusing to work and drillers refusing to drill for oil on Aboriginal land. Workers’ industrial action very nearly stopped a multinational company in its tracks.

In June 1979, the Western Australian government approved oil drilling exploration by US multinational Amax, despite the location being on sacred land. The Noonkanbah community in the Kimberley region resisted from the onset. Their determined stand shocked the establishment, the afternoon newspaper Daily News noting that it was “the first time in WA an organised group of Aborigines is determined to keep outsiders off what they consider is their land”.  On 15 June, they locked the gate and refused to let company representatives onto their land.

The Noonkanbah community won support from Aboriginal communities as far away as the Northern Territory, organisations such as the Kimberley Land Council (founded three years previously with seed money from unions and no government funding), anti-racism groups, Uniting Church ministers and some Labor politicians. Crucially, they won support from the union movement. One hundred delegates at the Trades and Labour Council (TLC, today called UnionsWA) meeting in Perth 2,500 km away, unanimously passed a solidarity motion on hearing about the traditional owners’ stand.

Noonkanbah was at the time a successful Aboriginal-owned and -run pastoral station. Aboriginal workers at Noonkanbah had walked off the white-owned pastoral station in 1971 to protest against the non-payment of wages and the generally horrific conditions. To take one example, they were first provided with “toilet facilities”—one earth pit latrine for 30 people—that year. The station eventually went bankrupt, and the federal government bought it “back” for the community, which “quickly restored it to good health”, wrote anthropologist Erich Kolig in The Noonkanbah Story.

There was a mining and resources boom at the time, and the vast Pilbara and Kimberley regions in the state’s north-west were key sites of exploitation. Premier Charles Court was pro-development and an arch reactionary. His anti-union section 54B (of the Police Act) prevented three or more people gathering without a permit. He told his biographer Ronda Jamieson: “You’re not dealing with a mob of naughty Sunday School children when you’re dealing with these hardline, left wing, militant trade unionists”.

He also brought in laws to deny Aboriginal people the vote and described the 1968 equal wages decision for Aboriginal pastoral workers, which unions supported, as “devastating”.

On 25 March 1980, the trade union movement increased its support from the political to the industrial, the TLC placing bans on the transport and operation of the drilling rig that was to be used at Noonkanbah. Amid delayed plans, the union opposition and campaigning against the drilling, Amax wanted to pull out of the whole thing. But Premier Court wouldn’t let it, offering compensation instead. “If we walk out of Noonkanbah it will be the next station and the next station, and the next, and the whole of Western Australia will be denied oil exploration”, he told Jamieson.

The trade union movement doesn’t just get involved in industrial things, it gets involved in social issues … We could see an injustice and … Charles Court’s bloody storm trooper attitude to all these things … and we felt we needed to do something.

Incredibly, the government set up its own scab trucking company especially for the operation, paying drivers well above the going rate. The scabs left Midland Brick—owned by prominent Liberal Party donors—in the dead of night. The convoy of 50 trucks had a police escort for the whole 2,500 km journey. Many of the scab drivers wore disguises, so scared were they of repercussions from trade unionists. Unionists and Aboriginal people protested at several locations along the scab trucks’ long journey.

At the North West Highway near Karratha and Roebourne in the Pilbara region, around 50 protesters blocked the road. Transport Workers’ Union organiser Paddy Hartnett was arrested after parking his car in the middle of the road to block the trucks. Hartnett told WA’s Irish Scene magazine many years later that the use of scabs “was like a red rag to a bull and as the union organiser in Karratha it was my job to stop the convoy”. Five more unionists from a range of unions were also arrested.

Graeme Haynes—a long-time Electrical Trades’ Union shop steward at Cliffs Robe River iron ore company—took part in the protest. “A copper chased me—I was taking photos of all the idiots with false beards”, he says over the phone from Victoria. “A few hundred metres into the shrub and spinifex, he realised he wasn’t up to the task.” Haynes, a socialist, abhorred the anti-Aboriginal racism so prevalent in the state’s north-west and had been campaigning against it for years. There was even talk among unionists of parking a train loaded with iron ore across the road, but this didn’t eventuate.

Aboriginal protesters stopped the convoy at Strelley, not far from Port Hedland. “About one hundred and sixty of the mob occupied the bridge at Tabba Creek and covered it with rocks and stones”, activist Steve Hawke wrote in Noonkanbah: Whose Land? Whose Law? During the 1946-49 Aboriginal pastoral workers’ strike in the Pilbara, the “Strelley mob” came together as a self-sustaining strike community. Many never went back to work.

The Broome protest was organised by the local Waterside Workers’ Federation branch and the Aboriginal community. Aboriginal unionist Terence (Terry) Mathews, on the union’s Broome branch committee, was central. The federation and other left-wing unions had a history of support for Aboriginal rights going back many decades.

Between 200 and 400 protested, setting up a picket across the road. Most of the protesters were Indigenous, joined by some wharfies and other unionists.  Some handwritten signs read, “Poor fella my country” and “ACTU picket line”. Another was “There’s no flies at Noonkanbah but the scabs are on the way”.

The picket temporarily stopped the convoy, but eventually the trucks “smashed through the picket line at about 30kph showing no regard for the safety of protesters … with sirens and horns blasting”, according to the Maritime Worker. Union representatives Kevin Bullen and Mathews were both nearly hit. They were arrested along with four others.

The final blockade was at Mickey’s Pool, just out of Noonkanbah, where a crowd of 60 Noonkanbah community members, Uniting Church ministers and unionists tried in vain to stop the convoy. Six ministers were arrested.

When the convoy arrived at Noonkanbah, the twenty workers employed to do the drilling held the fate of the entire dispute in their hands. They had joined the Australian Workers’ Union six months earlier. A right-wing union with a mixed record on Aboriginal rights, the union eventually came around to supporting the dispute. After an ACTU call-out garnered $128,000 in donations, in part to pay the drillers’ wages, the workers decided to ban drilling.

“The ban imposed by the drilling crew was the union movement’s triumphant tactical counter to the convoy”, Steve Hawke wrote. “The roughnecks … who worked the drilling rigs were renowned as a hard-working, hard-drinking, high-living, independent-minded mob. There was a high degree of mobility in the industry … No one had counted on them coming out on an issue like this.”

The government organised a scab crew, which started drilling on 29 August, when virtually the entire Noonkanbah community was at Fitzroy Crossing for the races. No oil was found.

As well as industrial action and the protests against the convoy, unions contributed by way of visits by union leaders to Noonkanbah, through articles in union publications, by lobbying the government and relevant companies, and by participation in demonstrations. For example, in August, protesters marched to St Paul’s Cathedral in Melbourne to set up a mock “oil rig” made by members of the Builders Labourers’ Federation.

Three factors explain how this incredible episode came to pass. First, the inspiring resistance of Aboriginal people at Noonkanbah. Without this, it could never have happened at all.

Second, the high level of industrial struggle in Australia at the time. The 1969 Clarrie O’Shea strike had opened a floodgate of union militancy, which didn’t subside until the 1983 Prices and Incomes Accord. Workers struck for an incredible 11 million days between 1979 and 1981. Workers in the iron ore sector in the Pilbara region, where some of the Noonkanbah protests took place, were one of the most militant sections of the Australian working class at that time, strongly organised, regularly striking and driving management wild. For example, in 1979 workers struck for ten weeks at Hamersley Iron (a large iron ore company, now part of Rio Tinto), pushing back attacks on union rights and winning big increases to wages and conditions.

This is not to say all workers were convinced anti-racists—far from it. But when unions are fighting and winning over issues of wages, conditions and safety, they are more likely to take serious industrial action in support of social issues. There was also a legacy of social campaigns, including for Aboriginal rights in the 1960s and 1970s, campaigns that left-wing unions strongly supported.

Third was the presence of activists highly committed to the cause. Those activists spearheaded the union response on the ground and argued for solidarity.

The Noonkanbah scabs
each one of them’s a mug,
they’d sell their mothers
and their kids for just a buck.
The Noonkanbah scabs
helping Charlie Court the thug,
push the oil rig to Noonkanbah
on scabby black-banned trucks.
Up here in the Kimberley
a struggle’s going on,
the Yungyora of Noonkanbah
are standing up real strong.
They’re fighting for their country
and for people all around.

This article was originally published in Red Flag in 2021. Alexis Vassiley is a labour historian based in Perth. He is the author of a longer article on trade union solidarity during the Noonkanbah dispute published in Labour History 110 (May 2016), on which this article is based.  Thanks to Warren Fahey for permission to share the record covers and song found below. 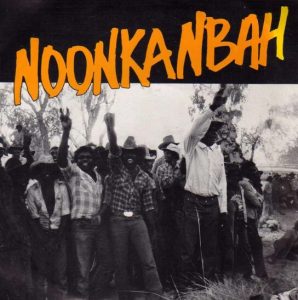 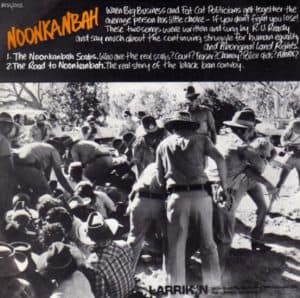 Listen to the song – R.U. Ready: The Road to Noonkanbah

The contents of The Commons Social Change Library have been added in good faith. If you see something here that you believe shouldn’t be shared, or should be licensed differently, please contact us.