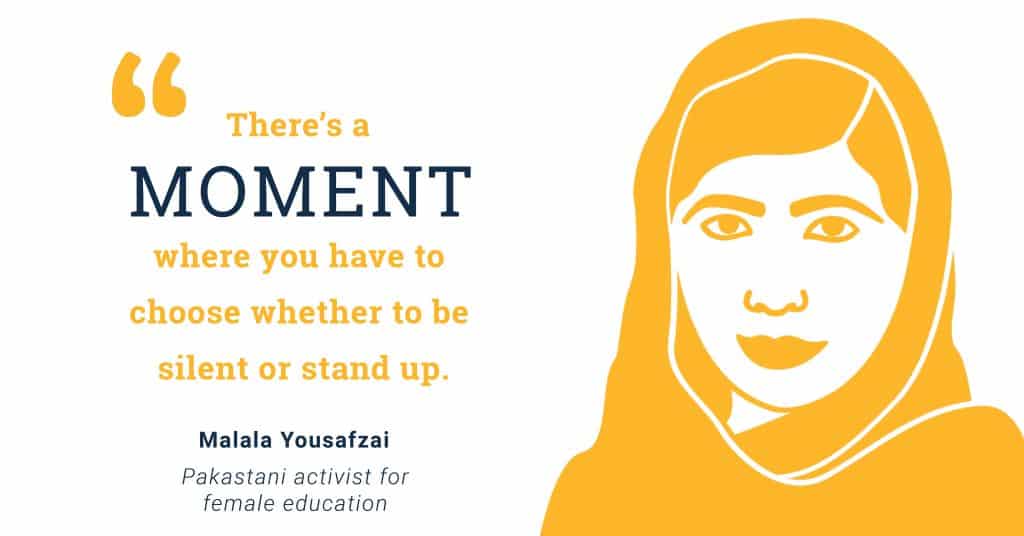 The conservation movement is especially prone to burnout. High hopes and energy soon dissipate without quick success. Would I too have succumbed had I known at the outset it was a ten year journey? I have learnt that persistence and passion are key hallmarks of success.

Right now, we need to show our politicians that if they won’t lead, then we will, because leadership is strongest when it comes from our community.

Leaders have a responsibility to open doors and create opportunities for others and to support them to reach their full potential.

You have to be secure in yourself to engage and challenge the mainstream.

Disappointment and adversity can be catalysts for greatness. There’s something particularly exciting about being the hunter, as opposed to the hunted. And that can make for powerful energy.

Dear friends, much pain has been endured in the past, and that pain is no longer designated to hopelessness. It’s time to move the process of reconciliation forward with a little more speed. That is the task. If not now, when? If not us, who?”

People are going to have to take responsibility into their own hands. We can’t leave it in the hands of politicians and petty bureaucrats. All power and strength to the people. I reckon we’ll do it. Absolutely!

We have our eye on the same destination – a sustainable future where Indigenous people are recognised for their wisdom and honoured for their culture – there is no problem taking a different path to reach that place.

We’re going back to basics in terms of what is real on the planet. People and nature are real, the rest are constructs. Those constructs can be changed, and economic tools have to be changed in order for people and ecosystems to survive.

If we try, we may still fail. But if we do not try, we cannot possibly succeed.

You can choose not to be interested in politics, but you can’t choose to be unaffected by it.

The two important things that I did learn were that you are as powerful and strong as you allow yourself to be, and that the most difficult part of any endeavour is taking the first step, making the first decision.

It’s a sign of your own worth sometimes if you are hated by the right people.

Trans and gender diverse people are vital in achieving gender equity for all, not just ourselves. In this time of #metoo, our ability to move aside the artificial barriers that binary thinking creates will be hugely beneficial for assisting cisgender people whose lives are impacted negatively by toxic masculinity. May we work together to achieve total respect in relation to all aspects of gender.

We are telling the story so that our history is not forgotten, but also to create a better future for all people, all over the world. This is why we want nuclear weapons permanently banned and the uranium that can create them left in the ground. The future forever belongs to the next generation.

Emergent strategy is focused towards people who have a desire to change the world. They see that something is wrong. They see that there’s injustice, imbalance, and that deep transformation is needed. The question is, how does one transform oneself in order to bring about that transformation?

This is a big part of disability justice; if you don’t have people who use wheelchairs or people who are blind or people who are deaf at the imagination table when you’re creating a building or an event, then you will find out later that whatever you made is not actually accessible to the people it was intended to be for.

We need to make sure we’re creating spaces to create new leaders and new types of leadership. 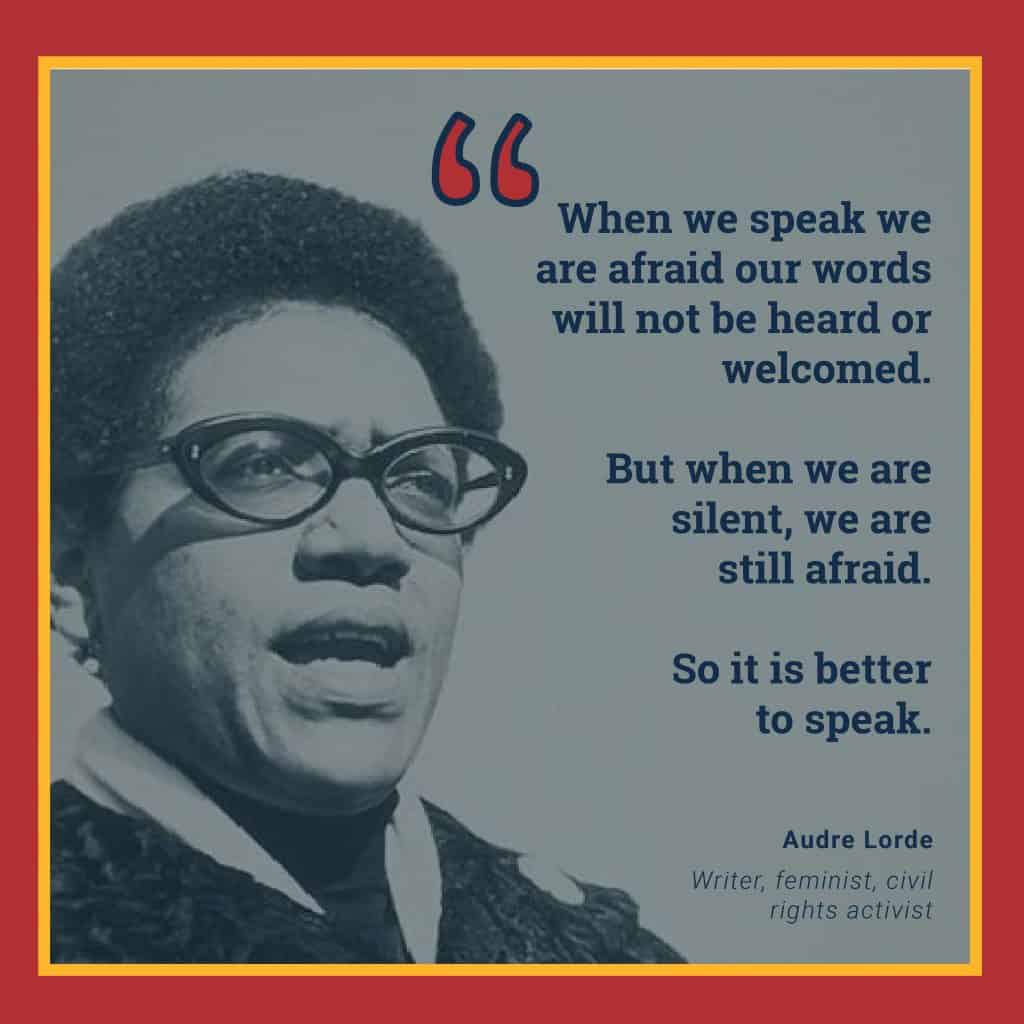 When we speak we are afraid our words will not be heard or welcomed. But when we are silent, we are still afraid. So it is better to speak.

Caring for myself is not self-indulgence. It is self-preservation, and that is an act of political warfare.

It is not our differences that divide us. It is our inability to recognize, accept and celebrate those differences.

Gandhi once declared that it was his wife who unwittingly taught him the effectiveness of nonviolence. Who better than women should know that battles can be won without resort to physical strength? Who better than we should know all the power that resides in noncooperation?

Freedom, by definition, is people realizing that they are their own leaders.

Change is opportunity in disguise.

It’s not as if I would have been the first out transsexual to have attempted public office, I was just lucky enough to be the first one to achieve it. Many others who’ve done it before me failed, but those are the ones who are the pioneers. Those are the ones who’ve pushed the boundary to the point where I happened to be lucky enough… for it to happen. And to be able to be a positive force as an event that happened, a click forward in our political progress and our social progress.

The truth will set you free, but first it will piss you off.

You have to change yourself in order to change the world. We are responsible for the evolution of the human species. You begin with the protests, but you have to move on from there… just being angry does not constitute revolution.

We cannot solve a crisis without treating it as a crisis. And if solutions within the system are so impossible to find, then maybe we should change the system itself.

One individual cannot possibly make a difference, alone. It is individual efforts, collectively, that makes a noticeable difference—all the difference in the world!

I believe that telling our stories, first to ourselves and then to one another and the world, is a revolutionary act.

That’s all nonviolence is – organized love.

Nonviolence is a flop. The only bigger flop is violence.

If this world is to be healed through human efforts, I am convinced it will be by ordinary people whose love for life is even greater than their fear.

There’s a moment where you have to choose whether to be silent or to stand up.

All social movements are founded by, guided by, motivated and seen through by the passion of individuals.

We may encounter many defeats, but we must not be defeated. In fact, it may be necessary to encounter defeats, so we can know who the hell we are.

All around us the old stories are failing, crumbling in the face of lived experience and scientific reality. But what stories will replace them?

In this time, people need strength models. Strength isn’t just about momentary power to jump building to building, it is also endurance to handle what is less than ideal. It’s the gritty persistence that disabled people embody everyday.

In this historical moment, we have to fight for the valuable lives of butterflies, and moss, and elders. Because our lives – and all life – depends on it. We must move beyond our cultural beliefs that tell us we are only worth as much as we can produce.

Those who contemplate the beauty of the earth find reserves of strength that will endure as long as life lasts.

Joy doesn’t betray but sustains activism. And when you face a politics that aspires to make you fearful, alienated and isolated, joy is a fine act of insurrection.

Hope just means another world might be possible, not promise, not guaranteed. Hope calls for action; action is impossible without hope.

Inside the word “emergency” is “emerge”; from an emergency new things come forth. The old certainties are crumbling fast, but danger and possibility are sisters.

It’s not an investment if it’s destroying the planet.

You are not Atlas carrying the world on your shoulder. It is good to remember that the planet is carrying you.

Women’s Environmental Leadership Australia (WELA) is empowering, supporting and funding women’s leadership for our environment and climate action, in order to transform Australia’s response to these crises. Find out more about WELA.