What happens when nonviolent political activists use humour to challenge those they consider more powerful than themselves? What does it mean to the activists, and what types of responses do the use of humour generate from opponents, media, police, bystanders and other activists? – Sorensen, 2014

A 2014 PhD thesis written by activist-scholar Majken Jul Sorensen explores how creative activists combine humour with seriousness via stunts to create change. The following excerpts from ‘Humorous Political Stunts: Nonviolent Public Challenges to Power’ briefly outline what such actions involve, how they work, and what they can achieve. The category of ‘Supportive stunts’ is then discussed along with the example of the John Howard Ladies’ Auxiliary Fan Club.

This is what I mean by humorous political stunts:

A humorous political stunt is a performance/action carried out in public which attempts to undermine a dominant discourse. It is either so confrontational that it cannot be ignored or involves a deception that blurs the line between performers and audiences. It includes or comments on a political incongruity in a way that is perceived as amusing by at least some people who did not initiate it.

The discourses which are challenged can be major and all-pervading discourses like militarism, consumerism or neo-liberalism, or it can be more limited discourses controlled by a powerful political party. This challenge can be directly aimed at a person or institution considered an opponent, or it can be communicated to other audiences using a variety of media. That the humorous political stunt takes place in public means that this is more than a humorous critical comment or joke whispered in secret. One can observe someone doing something without hiding it, although they might try to hide their identity.

The stunts are political in the broad sense that they comment on a political theme of how society should be organised. Humorous political stunts also have to be humorous. Since what people consider funny varies greatly, not everyone will necessarily find the stunts amusing.

Supportive stunts are framed as ostensible attempts to help and protect from harm by exaggerating and over-emphasising the discourse and claims to truth upheld by those in power.

Corrective stunts also use exaggeration to present an alternative version of the power holders’ truth, but they hijack the identity or message of those in power and declare their protest from this disguise.

In the naive stunts, the challengers put forward their critique from behind a pretended innocence that seems unaware that a dominant discourse exists. It provides the possibility to act as if the pranksters do not understand that what they do can be interpreted as protest.

Absurd stunts attempt to defy all rationality and ignore all dominant discourses.

Finally, in the provocative stunts the pranksters transcend power by appearing not to care about the consequences of infuriating the powerful.

Supportive humorous stunts are framed as attempts to help, support, protect from harm, and celebrate. Those who carry out supportive stunts appear supportive and rational, but what happens is that the target is invalidated. On the political scene, those assumed to be in power and control are joined up front by the pranksters. Apparently the pranksters do not dismiss the truth and rationality the representatives of the dominant discourses present, instead it is exaggerated and overemphasised. Usually irony plays an important role in supportive humorous stunts, since they are not supportive at all, but instead attempt to disconfirm their targets.

The targets will know that they are being watched, and the audiences are presented with an image of the power holders’ vulnerable sides. Here the protesters do not appear irrational in their relation to what they actually oppose, they are constructive, helpful and supportive. By acting in this way they attempt to undermine their opponents’ claims to truth and transcend the unequal relations of power.

Compared to conventional political protest, at first glance supportive stunts look like real support, but a closer look reveals an underlying message that exposes and disconfirms.

Australia’s conservative prime minister from 1996 to 2007 had an extraordinary fan club consisting of four young women plus their driver and camera women. In characters as Bea Wight, Bea Wright, Bea Rich and Bea Strait they mocked him and his politics during the last part of his time as prime minister. In an interview, the women explained how the names “reflect the key pillars of Howardism – being white, right, rich and straight.” The women were provoked by Howard’s conservative politics and what they saw as his attempt to bring Australia back to the 1950s. They set out to confront his politics in an unusual manner, starting with the 2004 election.

Dressed up in silly hats, pearls, long white gloves, lots of makeup and frocks, representing the stereotypical Australian housewife of the 1950s, they tried to confront him with these ironic personas. In 2004 they did not get closer than 50 metres, but in the following years, the characters were developed. Prior to the 2007 election campaign, they did their first public performance on a tram. Here they launched the “White blindfold campaign” and explained to the passengers “Now, this is the official John Howard view of history. What happens with the white blindfold is that you put it on and you can’t see a thing. It completely whites out everything. All you can see is white.” Then they had a “patriotic” Australian history quiz, satirising Howard’s perception of what Australia’s history was like. Responses from the passengers were positive, and even Howard supporters thought it was funny.

Getting a chance to get close to Howard during the election campaign was difficult, since his schedule was kept secret, but in 2007 they finally found themselves at the right hotel. While the journalists were waiting for Howard, the women got a chance to introduce themselves as the John Howard Ladies’ Auxiliary Fan Club. They had a number of gags, e.g. playing on the electoral Viagra they had prepared for Mr. Howard and the race card that he could play during the election (which Howard had done in previous elections) and uranium export to Iran and North Korea. Later that day, they finally met him in the botanical gardens in Melbourne.

John Howard and a member of his ‘fanclub’. Image Courtesy – Rocky

Bea Wight asked Howard if he would like some yellowcake, referring to a form of uranium concentrate powder, and Howard’s recent signing of an agreement with Russia about export of Australian uranium. Bea Wight explains what happened: “He looked at us and smiled as though all his dreams had come at once. He smiled. He was happy, just for one split second, and then he realised – ‘Electoral Viagra’ – that we were evil.”

The fan club continued to follow Howard, including by going to a horse race he attended. Here they found their way into the exclusion zone with their pink fluffy hats and white gloves in order to encourage Howard to play the race card. When security guards wanted to escort them out, they explained that “Johnny” had asked them to be there, and that they were his fan club.

Next time they tried to get to Howard, their costumes helped them though several security points, since they looked cute and harmless. That gave the four ladies time with Howard’s people and an opportunity to offer them xenophobia pills, with words like “Are you afraid of muslims dear, please take this pill it will help you.” They had white pills for fear of muslims, pink for gay people, purple for feminists and red ones for communists and unionists – all minority groups the fan club thought were attacked by Howard’s politics.

The fan club managed to get away with many stunts without being arrested or fined, and made it to the national TV news. They think themselves that because they presented themselves as absolute Howard lovers and behaved so nonthreateningly, they were perceived more as performers than as activists. It also helped that they were four small white women. And they were convincing. A news reporter starts her account of the offering of yellowcake “Even if their message is not quite your cup of tea, it’s hard not to admire the commitment of the four mothers of the John Howard Ladies Auxiliary Fan Club.”

The full thesis, which analyses numerous examples of successful stunts, can be downloaded here. 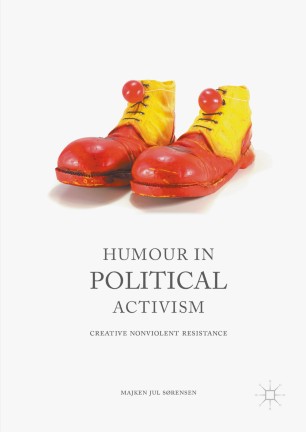 A shorter version of the thesis is published as the book Humour and political activism: Creative Nonviolent Resistance and can be purchased here.

Majken Jul Sorensen is an associate professor of sociology at Østfold University College, Norway and Karlstad University, Sweden. Her interest in nonviolent social movements, conflict transformation as well as humour and political activism has to a large degree focused on participants’ experiences and people’s agency and ability to create change from below. The question of how change occurs has taken Majken to social science areas such as social movement theory, resistance studies and sociology of humour, law, history and emotions. She is the author of a number of articles, chapters and books, details of which can be found here.