In a radical departure from the traditionally recognised activities of trade unions the 1970s saw diverse forms of worker activism emerge across Australia. A rise in grassroots action in the form of green bans, work-ins and refusals to accept lay-offs was backed by the widespread defiance of anti-strike laws. In 1969 strikes involving more than 500, 000 people had defeated the use of federal penal powers but, as discussed in this excerpt from Sam Oldham’s Without Bosses: Radical Trade Unionism in the 1970s, it took continuous defiance for workers to retain the right to strike.

By far the most successful intervention of workers into political affairs was the near total neutralisation of anti-strike laws throughout the entire 1970s. After the successful defeat of the penal powers in 1969, the threat of legal sanction for industrial action was removed in all but the most radical cases, such as work-ins and occupations. A major 1971 strike at Commonwealth Engineering (Comeng) in Sydney shows the militancy of ordinary workers in opposing anti-strike powers.

At Comeng, the use of penal provisions under the Arbitration Act and stand-down clauses within the Metal Trades Award quickly became the main issue in a dispute which started over wages. To coincide with a meeting between ACTU officials and Comeng over the strike, another meeting of over 700 shop stewards from all metal unions resolved to refuse payment of all fines, regardless of the ‘official’ decision by union leaders and other officials. In the end, the Amalgamated Engineering Union, Blacksmiths & Boilermakers’ Society and Sheet Metal Workers’ Union refused to pay the ensuing fines, as did the Moulders’ Union for a separate strike in 1971. With the threat of a repeat of 1969, the fines were again paid by another anonymous donor.

In the same year, the introduction of new penal powers by the South Australian Labor government, with support from the T&LC, provoked rank-and-file anger. Jim Moss pointed out some of the contradictions within the union movement: ‘union delegates to the T&LC who voted for the S.A. Government’s legislation did so knowing full well that the trade union movement as a whole had already decided to the contrary … There are many instances where the workers are forced to exert wasteful time and energy in order to express their will in their own trade unions [against] trade union bureaucrats who see office as a means to further their own careers in the trade union movement or Labor Party.’

Only a few weeks prior to the introduction of the legislation, the State Secretary of the Australian Workers Union, Jim Dunford, had refused to pay fines arising from the Kangaroo Island dispute over union hire. Facing the threat of a mass strike, the Government itself paid the fines. Moss described a feeling among unionists that it had done this to ‘head off a full-scale confrontation between the unions and the employers.’

The opposition of rank-and-file unionists to anti-strike laws was demonstrated again and again throughout the period. Early in 1971, members of the Victorian Teachers’ Union took a series of strike actions over a log of claims. Some 40 Victorian secondary schools held strikes throughout March and April, demanding reduced class sizes, the removal of unqualified teachers from schools and reductions in ‘contact time.’

In response, the Bolte government proposed the imposition of harsh penalties for the strikers, undoubtedly hoping to test out the penalties for use elsewhere among state sector employees. One sanction was that teachers would lose a year of long service leave credits for every day on which they defied the anti-strike order. In direct response to the government’s order, teachers planned mass strike action, with 8,000 teachers attending strike meetings across Victoria. The government relented. 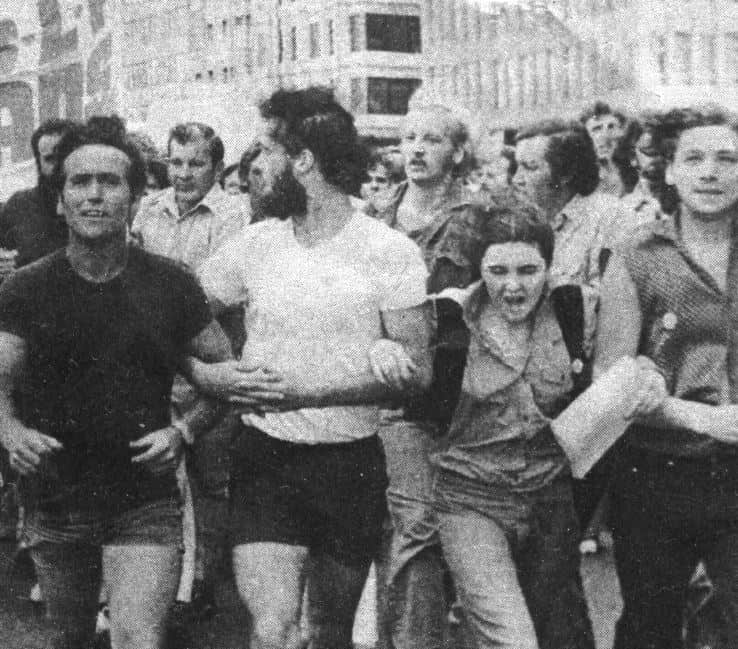 One of the Coalition government’s more blustering policies came in 1977 in the form of an Industrial Relations Bureau (IRB), a sort of industrial relations police force with expanded powers to arrest and charge unionists. Announcement of the IRB was met with immediate strikes and stoppages. Eight thousand workers and shop stewards, including 1500 dockyard workers, struck to attend mass meetings in Victoria. Such was the display of resistance that the IRB was rendered, in the words of rank and file publication Link, ‘a paper tiger.’ As late as June 1979, ten officials of the Amalgamated Metal Workers and Shipwrights’ Union (AMWSU) were charged under the Western Australian Police Act for holding a public meeting without permission. Amidst an immediate state-wide threat of export bans, transport blockades and ‘widespread industrial dislocation’ by members of the AMWSU and other unions, another anonymous donor paid all outstanding fines.

Union members saw their actions in defying anti-strike laws as a moral imperative. It was their fundamental right to take strike action on their own terms and at their own discretion, and they would oppose any attempt by the state to impede them. This comes back to some fundamental points about democracy – many unionists saw their unions as the organisations that represented them when it came to industrial and economic affairs. Without unions, they would be left at the mercy of politicians and policymakers who had no experience or understanding of their day-to-day lives. Many also saw shop and site committees as being in the position to exercise this power. A mass meeting of Victorian Amalgamated Metal Workers’ Union delegates in 1973 affirmed their ongoing opposition to anti-strike laws, declaring that they were, ‘firmly opposed to any agreement or consent award which precludes metal workers from exercising their inherent right to struggle on an individual shop or group basis for improvements in wages rates or working conditions.’

For many union workers, it was their inherent right to take collective action over their working conditions, and so it was their duty to defy any system of laws that attempted to curtail it.

Governments responded in different ways to the rejection of anti-strike laws by unions. It is interesting to speculate about the identity of the anonymous benefactors who consistently paid off union fines when it came down to a confrontation. It was rumoured that the fines were paid by the Australian Security Intelligence Organisation, although it may also have been the initiative of the large employers’ associations who sought to avoid the catastrophe of losing a major battle against the unions. Although it seems counterintuitive, the fines were paid not to do the unions any sort of favour, but to prevent them from demonstrating the full extent of their ability to ignore the law. Payment of the fines allowed governments and employers to avoid a series of humiliating defeats and – perhaps even more significantly – prevented unionists from realising just how powerful their organisations had become.

As a direct result of union pressure, the ALP was forced to remove strike penalties from its policy program in 1971. Despite ongoing pressure from employer groups, this remained the policy throughout the brief term of the Whitlam government. After 1975, the Liberal–Country Party Coalition, led by Malcolm Fraser, sought to shore up the legislative power necessary to bring the union movement to heel. Fraser’s legal reforms represented not so much a return to the penal provisions of the 1950s and 1960s as a considerable extension of them, but the strength of the union movement meant that he was unable to use them. One industrial relations scholar coolly observed that industrial penal powers for the purposes of policing unions were, ‘subject to the same fundamental limitation as all sanctioning devices in the industrial-relations context— they can work only so long as those to whom the sanctions are directed are prepared to allow them to work.’

In other words, if a large enough proportion of the population took strike action (and had sufficient power to hold the strike), there was little that a relative handful of politicians and police could do about it. Industrial sociologist Alex Carey reached a similar conclusion, observing that ‘Fraser obtained all the anti-union legislation he needed’, but ‘could not use it because his specially conducted opinion polls continued to tell him that such action would not have enough public support to be viable.’

It was not until the 1980s that the law was used to smash the unions.

Without Bosses: Radical Trade Unionism in the 1970s covers numerous campaigns and industrial disputes providing valuable insights into the currents that developed in Australian trade unionism during the era. Copies can be purchased from here.