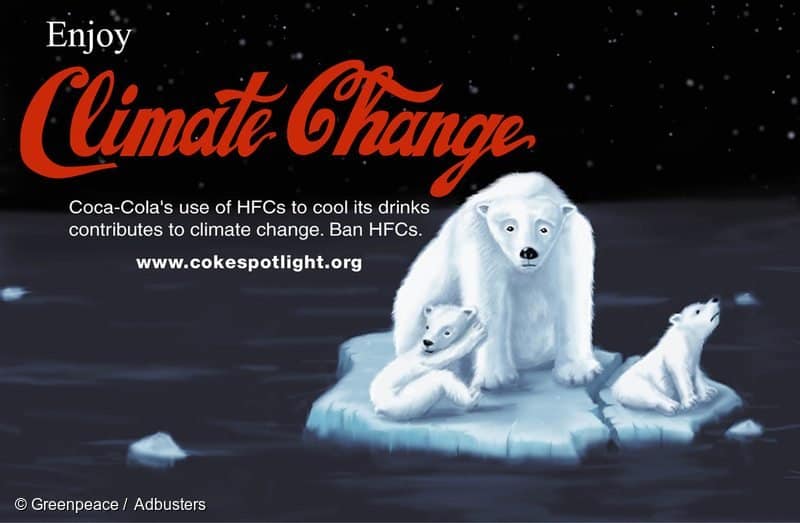 After the dramatic discovery of the ozone hole in 1986, activists, particularly working with Greenpeace, campaigned for an international ban on the use of ozone-depleting chlorofluorocarbons, often used in refrigeration. In 1987 country representatives in the United Nations wrote the Montreal Protocol to the Vienna Convention for the Protection of the Ozone Layer as an international treaty calling on countries to phase out and ban chlorofluorocarbons.

HFCs are considered to be the most potent greenhouse gas ever created and trap significantly more heat than carbon dioxide. Eliminating HFCs would mean a huge step towards slowing global climate change. In 1992 Greenpeace developed an alternative refrigerator called Greenfreeze that did not use HFCs.

In the early 1990s Greenpeace drafted and submitted an anonymous proposal for Sydney, Australia’s bid to have the 2000 Summer Olympic Games. When Greenpeace’s proposal was chosen in the top five out of over 100 professional architectural firms, the Olympic bid committee in Sydney asked Greenpeace to continue working with them to create environmental guidelines for the bid for the Sydney Summer Olympics.

After they helped draft the bid proposal with new recommendations for a greener Olympics, Greenpeace worked as a watchdog, making sure that the Olympic Coordinating Authority adhered to its environmental promises and Greenpeace offered solutions when the coordinating authority failed to meet the guidelines.

In 1998 Greenpeace became alarmed that the Games organizers and sponsors were not keeping their commitments, especially to use more environmentally friendly Greenfreeze refrigeration technology. Only about 100 of Coca-Cola’s 1800 refrigeration units were going to comply with the guidelines the groups had set out earlier.

Greenpeace filed a lawsuit with the Olympic Coordinating Authority to force adherence but soon became tangled in a legal battle they thought might drain resources and time. Greenpeace decided not to pursue the legal fight and instead started a campaign to hold Coca-Cola responsible for using more environmentally friendly refrigeration technology.

In January 2000 Ian Higgans, Greenpeace Australia’s chief executive, wrote Douglas Daft, Coca-Cola’s chief executive, asking the company to comply with the climate guidelines for HFC-free refrigeration. Coca-Cola executives responded that their use of HFCs was in accordance with the Montréal Protocol and that they were testing natural refrigerants in Europe.

Greenpeace was unsatisfied with the company’s response and published a report called “Green Olympics, Dirty Sponsors,” exposing McDonalds and Coca-Cola for using HFCs in their refrigeration.

On 1 June 2000 Greenpeace launched their “CokeSpotlight” campaign. A website called CokeSpotlight.org provided volunteers with downloadable stickers, posters, postcards, and email images to send to Coca-Cola executives or put on Coca-Cola products. These stickers and images parodied Coca-Cola’s signature images of polar bears, but had them floating on melting icebergs and used the calligraphy for wording such as “Enjoy Climate Change.”

In late June 2000 Coca-Cola agreed to begin to phase out HFCs, invest more money in research on refrigeration alternatives, and require suppliers to install HFC-free refrigerants in all new equipment by the 2004 Athens Olympics.

Greenpeace won several of their campaign goals at this point, but continued to pressure Coca-Cola to commit to a timeline to completely phase out HFC refrigeration by 2020.

On 22 June 2004 Coca-Cola, Unilever, and McDonalds joined Greenpeace and the United Nations Programme for the Environment at a conference entitled, “Refrigerants, Naturally!” The conference was held in Brussels and brought together representatives from the food and drink industries, supply chains for those companies, and international and nongovernmental organizations to discuss HFC-free refrigeration.

All three companies agreed to continue working with Refrigeration, Naturally!, the first corporate alliance with the explicit goal of replacing HFC technology with natural refrigeration. Unilever and McDonalds then agreed to move towards HFC-free refrigeration. Coca-Cola led all of the companies by agreeing to phase out HFC refrigeration units worldwide by 2015.

On 4 May 2005 the United States Environmental Protection Agency awarded Coca-Cola, Unilever, and McDonalds the Climate Protection Award for their progress towards eliminating HFCs from refrigeration units.

On 18 September 2007 Coca-Cola announced its commitment to use HFC-free vending machines and coolers at the 2008 Olympic games.

In June 2008 Greenpeace, the United Nations Programme for the Environment, and Partners for Sustainable Development, Coca-Cola, Unilever, and McDonalds held another Refrigerants, Naturally! conference in Belgium, highlighting the companies’ efforts towards green refrigeration technology.

On 3 December 2009 Coca-Cola and its bottling partners reaffirmed their commitment to having 100 percent of their vending machines and coolers HFC-free by 2015. The company pledged to have 150,000 HFC-free vending machines and coolers in place by the end of 2010, an increase of its earlier commitment to have 100,000 in place by the end of 2010 in order to keep with their timeline of eliminating HFC refrigerators.

“Our ‘CokeSpotlight’ Campaign protested the use of HFCs in refrigeration by Olympics sponsor Coca-Cola.” Greenpeace 1 June 2000. http://www.greenpeace.org/usa/en/multimedia/photos/our-cokespotlight-campaign-p/