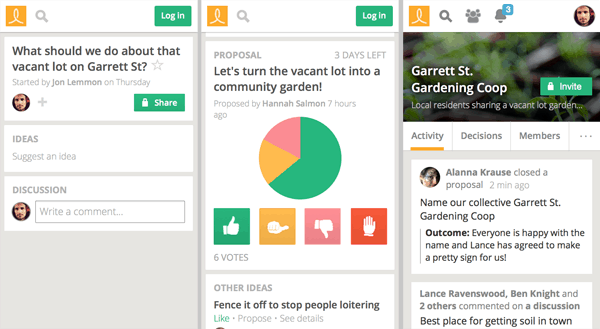 An example of the Loomio platform in action for discussion and decision-making.

If humans are supposedly becoming more intelligent why is that our biggest institutions on a systemic scale are behaving in a way that seems less and less intelligent? I mean threatening the future of all life on the planet seems like the stupidest thing we could do as a species.

Ben is the co-founder of Loomio, a collaborative decision-making platform used by thousands of NGOs, community groups and social movements worldwide. Ben has an academic background in the evolution of collective intelligence, a practical background in grassroots community organising, and a passion for the potential of appropriate technology to bridge the gap between mobilisation and powerful collective action. He was closely involved with the Occupy movement in 2011, which exposed him to the massively empowering results of collaborative decision-making on a large scale and the possibility that online tools could support participatory democracy as part of everyday life.