An interview with Maggie Cowling from Ducks for Detainees, a group that holds art events to maintain awareness of the plight of offshore detainees. In the following interview Maggie Cowling discusses the group’s practice and history and provides tips as well as suggestions for others planning exhibitions, stalls and other activities.

About Ducks for Detainees

Since starting up in 2016 Ducks For Detainees (D4D) have held four exhibitions in studios, a community house, and Coburg Library. They have also taken part in more than a dozen other events including duck-making at community centres and primary schools and market stalls in Brunswick, Coburg and Pascoe Vale and a photo event including over 1300 hand decorated ducks on the lawn at Parliament House in Canberra.

D4D have raised a few thousand dollars for refugees and offshore detainees since 2016 (for ASRC, Amnesty, We care Nauru and Gifts for Manus and Nauru), and engaged refugees from their community as well as those in offshore detention, MPs and other politicians. They have attended many rallies (with our Ducks for Detainees duck banner and mascot) and appeared in articles in the Moreland Leader and Il Globo and on 3CR radio, as well as being mentioned in Federal parliament. The group maintains direct contact with people in detention on Manus (including ‘Mr Duckie’ who inspired the theme) and let them know about our events.

What inspired you to start Ducks For Detainees and what are you hoping to achieve through the project?

I’d got in touch with a refugee on Manus Island (thanks to Julian Burnside QC’s letter writing campaign), who had had to leave his pet duck behind when he fled his home. He told me he missed her terribly and just asked that I send him images of ducks. So I did, and drew and painted ducks for him, and asked my friends to do the same. We sent them via Facebook messenger.

We ended up with so many ducks we decided to use them under the banner Ducks for Detainees to raise awareness and money in our community. We were just a bunch of friends and neighbours feeling stymied by what was being perpetrated in our name. We realised the duck was an apt symbol, but also non-threatening and accessible for an otherwise depressing and frustrating issue. We continue to use it to raise awareness particularly around offshore detention of people seeking asylum in Australia, and any money raised is currently donated to Gifts for Manus and Nauru for asylum seekers, phone credit top-ups, providing a life-line of communication and information.

How did you first go about getting people to contribute work for your Facebook page? Why did you decide to hold a launch for the page and was it successful in generating extra interest and involvement?

Some of us (including me)  knew nothing about Facebook, so those who did have experience set up the page – people were happily forthcoming with images – and that roughly coincided with our first event, which was held in my studio and workshop – an exhibition of ducks. It was a great party, with spoken word, music by a visiting German exchange student and hands on drawing on butchers paper. The artists were all ages and came from all over Melbourne and beyond and the media used were also diverse. The money we raised was donated to case workers at Amnesty and the Asylum Seekers Resource Centre. The artists were friends and friends of friends. Not everyone I approached wanted to get involved. One artist surprised me by saying she didn’t want to get involved in a political issue – for me, it was a human rights issue and human rights are universal, not political. The people attending were friends of the artists and the vast majority of them have continued their support.

I was really interested in the group RISE (Refugees, Survivors and Ex-detainees) and their motto ‘Nothing about us without us’. They were holding wonderful exhibitions which we attended and supported. We were trying to find our way sensitively and appropriately. We had to think about the topic from many angles and try to find the best way to be effective, without offence, exploitation or harm. I’m sure we still have a lot to learn. 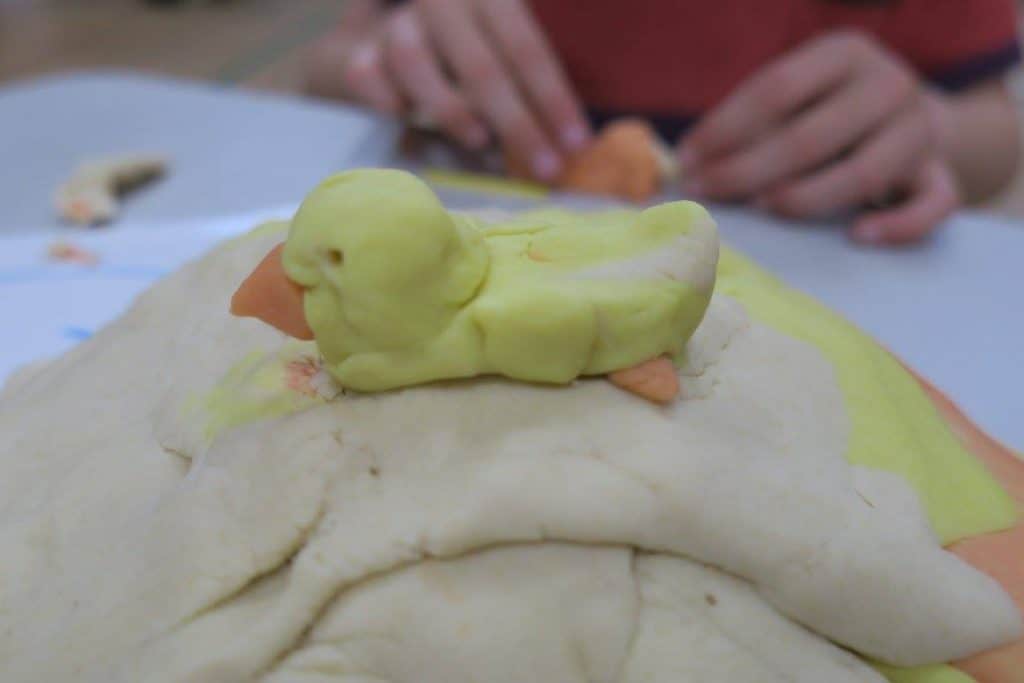 Ducks For Detainees at the Make Noise Festival.

In 2016 you held a ‘Pop Up Pond’ event. Can you tell us about the range of activities that were involved?

We had another exhibition of ducks (paintings, drawings, sculptures) at Newlands Community House, raffled 2 Leunig duck prints (with the artist’s permission and support), and conducted paper pulp duck making as well as origami, mask-making, play dough and drawing. Melbourne Djembe performed, Tamil Feasts (a social enterprise supporting refugees) provided food and approximately 200 people passed through. In the evening we screened the film Nowhere Line: Voices From Manus Island by Lukas Schrank, and heard from drummer and refugee Aria Yousefian, and a local musician.

You’ve done various events involving children. Can you tell us about some of these and why you see involving kids in activist art-making as important? What are some tips you can offer others wanting to do so?

We couldn’t have held the activities without involving kids because so many of us have or are involved with kids and people involved with families can’t participate if the children aren’t catered for. Fortunately children understand the topic very easily and respond very positively. They’re so matter of fact, with none of the hedging and baggage that goes on with adults. Again, the ducks were so welcoming and enticing, and adults were disarmed by the child-friendly theme. It made it easier for everyone to approach the issue. Explaining to the children what the ducks represented was a great way of deconstructing the issue, but that wasn’t why we included children. Activities that are fun for kids are fun for everyone.

We tried to limit waste and toxicity and pointy or sharp objects! We didn’t know it then, but I’ve since heard Steve Biddulph say there are many studies showing that giving teenagers in particular (though we aimed more at children) some agency in a cause, is beneficial at a stage when children are prone to depression. Children are also good at explaining these issues to their parents and helping them to see them stripped of prejudice.

Has it been easy to get people involved in group activities such as your 2016 Decorate A Duck For Detainees afternoon? What was involved with that particular event?

We’ve had really good numbers at all our events, and that particular one at Newlands Community House was aided by a Spanish language group who happened to be at the Community House on the same day and so joined our event! It was part of a bigger project: we had cut out over 1,300 ducks from light card to represent all the detainees on Manus and Nauru at that time, including ducklings to represent the many children in offshore detention.

Each duck was numbered and then the community was invited to decorate them – at schools, neighbourhood houses, family events, restaurants, market stalls. We photographed them and used them for publicity, and for displays, such as the one in the Coburg Library, then one of our members attached some of them to a sheet and took them to Canberra to lay them out on the lawn of Parliament for a media opportunity.

The decorations that people came up with – including people who didn’t identify as artists – were amazing. On the reverse of many of the ducks were messages, of hope, love, outrage, shame.

Can you tell us about the 2017 Welcome To Refugees exhibition at the Coburg library? What was involved in getting the library to host the exhibition?

The library hiring staff were very amenable and everyone worked with us once it was understood what we were trying to do. The work of Kurdish musician and artist Farhad Bandesh featured across one wall, then there were various artworks by Australian artists, either featuring ducks, portraits of detainees (obviously with their permission) or other related themes. At the same time we booked the adjacent meeting room to hear from refugees who had been recently released from MITA detention centre in Broadmeadows who emphasised the plight of those still detained (and still there today after 10.5 years).

We had messaged and asked some of the asylum seekers on Manus if they would like us to read out statements or poems – their words were strong and moving. Some of the poems had been written through Janet Galbraith’s amazing program “Writing through Fences”. We also heard from Samantha Ratnam from the Greens and ALP Wills MP Peter Khalil, and finished with the music of refugee musicians. What are some of the events at which you’ve held fundraising stalls? From whom have you sourced most of the artworks for these? What are some tips and suggestions you can offer others with doing this kind of fundraising?

We’ve held stalls at our children’s primary school events, farmers markets, Ceres Saturday market, local festivals (Pascoe Vale festival in the park, Merlynston Progress Hall Opening). Most of the artworks at stalls were ceramic ducks that were a combined effort by a couple of us occasionally with help from our children and their friends (we donated materials, firing, glazing, giving the entire amount made to Gifts for Manus and Nauru).

There were also paper pulp ducks by Fern Smith amongst other works, such as cards and t-shirts.

Tips: invest in a marquee; make items together as a team on a single day to get through the quantity and feel connected; have info handy to hand out, and a spiel ready to deliver – don’t be afraid to engage the public and explain what you’re about. Keep it smiley.

You’d probably make more if you just worked an extra day and donated your earnings, but these fundraisers are really about public engagement and information. Have a petition ready and tips on MP engagement and letter writing, ie. have actions for people to take.

Can you tell us about Fern Artz and the 2018 Safe Harbour Event?

This was another exhibition by more or less the same group of artists, in another local studio, coinciding with a local (Merlynston) market where we had a D4D stall (which helped to send people on to the exhibition) and was followed by a RightTrack conversation in the studio, using a values-based conversation to understand the failings of the processing; system (these conversations resulted in data being collated from attendees to present to MPs, showing them that their electorates wanted a fairer system).

Fern Artz is the creative practice of Fern Smith, a highly talented visual artist who focuses on social issues, human rights and sustainable art practice. She designed the Ducks for Detainees logo (as seen on our t-shirts) and has contributed many works to our exhibitions and stalls, as well as running activities for children. What’s coming up in the future for the group?

It’s unclear at this stage – we maintain contact with the detainees we’ve come to know, including Mansour, who at the time of writing is still on Manus (6 years on). We will continue to exist while there is offshore detention and while the plight of onshore detainees and asylum seekers is so dire in this country. A couple more stalls are likely in the next 6 months – probably with a focus on the attempt to repeal the Medevac legislation.

For more information see Ducks For Detainees on Facebook. Images courtesy of the author, Maggie Cowling.