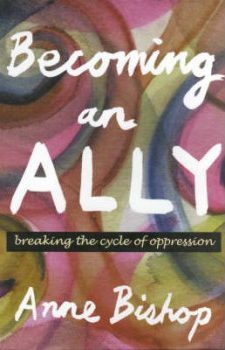 What does it mean to be an ‘ally’?

A question I often consider is:

What would it take to have activist groups and social change organisations which genuinely reflect the diversity in the broader community, to be actively inclusive of difference?

I think one part of the answer is the commitment to become active allies.

What is an ally? In my view, an ally is someone outside an oppressed group or identity, who commits to standing alongside those people. This can look like many things – such as speaking up against oppressive language and behaviour. It can also involve learning about that oppression, cleaning up our own beliefs and behaviours in the area, building friendships and working relationships across the divide of oppression… and more.

For example, as a woman who wants to see an end to sexism, a large part of my focus is working collectively with other women. However, in addition, I also want to see men acting as allies to women: standing alongside us and working to end sexism. It’s not all easy – precisely because of how sexism has impacted on my life and those of the men I interact with, I’m often frustrated by the thoughtlessness and unexamined sexism I encounter. But the project of winning allies pushes me to resist the urge to give up, and to act more powerfully in the face of this.

Interestingly, I find this challenges me to be an ally to men – to understand how they too have been harmed by sexism, and to keep trying to overcome what gets in the way of us being completely on each other’s sides. The relationships I have with men who I consider my allies, and who consider me theirs, enrich my life and give me hope.

What I really like about this model is its emphasis on how our own liberation is tied up with those of others. Being an ally is not charity work! As the great quote goes:

If you have come here to help me, you are wasting your time. But if you have come because your liberation is bound up with mine, then let us work together.

This is an updated version of an article that first appeared on the Change Agency’s enews in 2008 as part of the Liberation Book Club.