A practical handbook and model for activists to be more effective when facing injustice and powerful, dangerous opponents. The backfire model is a framework for understanding tactics used by perpetrators of injustice and how to oppose them.

Imagine you’re planning an action and think you might come under attack. Maybe it’s a rally and there’s a risk of police brutality. Maybe you’re exposing government corruption and there could be reprisals against your group. To be prepared, you need to understand the tactics likely to be used by your opponent, for example covering up the action and trying to discredit you and your group.

The Backfire Manual provides guidance for this sort of planning. It outlines the backfire model and gives examples and exercises for using it. This is a practical handbook for being more effective whenever you face a powerful, dangerous opponent.

Brian Martin is professor of social sciences at the University of Wollongong, Australia. He is the author of numerous books and articles on nonviolent action and is vice president of Whistleblowers Australia.

Each of these cases involves an injustice: police brutality, censorship, torture, massacre. In each case those mounting an attack — the police, McDonald’s, US prison guards, Indonesian troops — caused damage to their target. But in each case the attack ultimately backfired, causing much greater damage to the attacker and its allies.

Backfires can be immensely valuable in aiding efforts against injustice. The trouble is, most attacks do not backfire. Most police beatings receive little or no publicity. Most legal actions for defamation are hardly known. Most torture is done in secret. Even massacres, which are harder to hide, may generate comparatively little concern.

What is going on? Why do some attacks backfire and not others?

The backfire model is a way of analysing attacks. It highlights actions taken by each side to reduce or increase outrage from a perceived injustice. The model is not intended to tell people what to do. Activists know a lot about the local situation and are in the best position to make a judgement about options. The model is a general tool that points to the sorts of things that are likely to happen or that could happen. It can help activists to choose more wisely.

The backfire model, like any model, is a tool. It doesn’t guarantee success. Imagine an army that has the best possible strategy. That’s helpful, but if the army has few troops, is poorly trained and has outdated weapons, it’s unlikely to succeed even with a brilliant strategy. Likewise, the backfire model can help activists develop better strategies, but this isn’t a guarantee for success. It is simply one element in a much wider process.

When a powerful group does something unjust, it can take action to reduce popular outrage. In 1960, there were protests across South Africa against the racist pass laws. In Sharpeville, police opened fire on peaceful protesters, killing perhaps a hundred people. The police and government tried to reduce outrage, but even so the massacre severely damaged the South African government’s international reputation.

Torture is universally condemned, so when governments use torture, they are likely to use one or more of these techniques to reduce outrage.

The keys to backfire

The backfire model is about tactics to oppose injustice.

Backfire: an attack can be said to backfire when it creates more support for or
attention to whatever is attacked. Any injustice or norm violation can backfire on the
perpetrator.

Backfire can be apparent in adverse public opinion or greater activity by opponents.
Even when a perpetrator seems to get away with an injustice, it can be
counterproductive in the long term.

Most injustices by powerful groups do not backfire, because they are able to reduce
outrage. 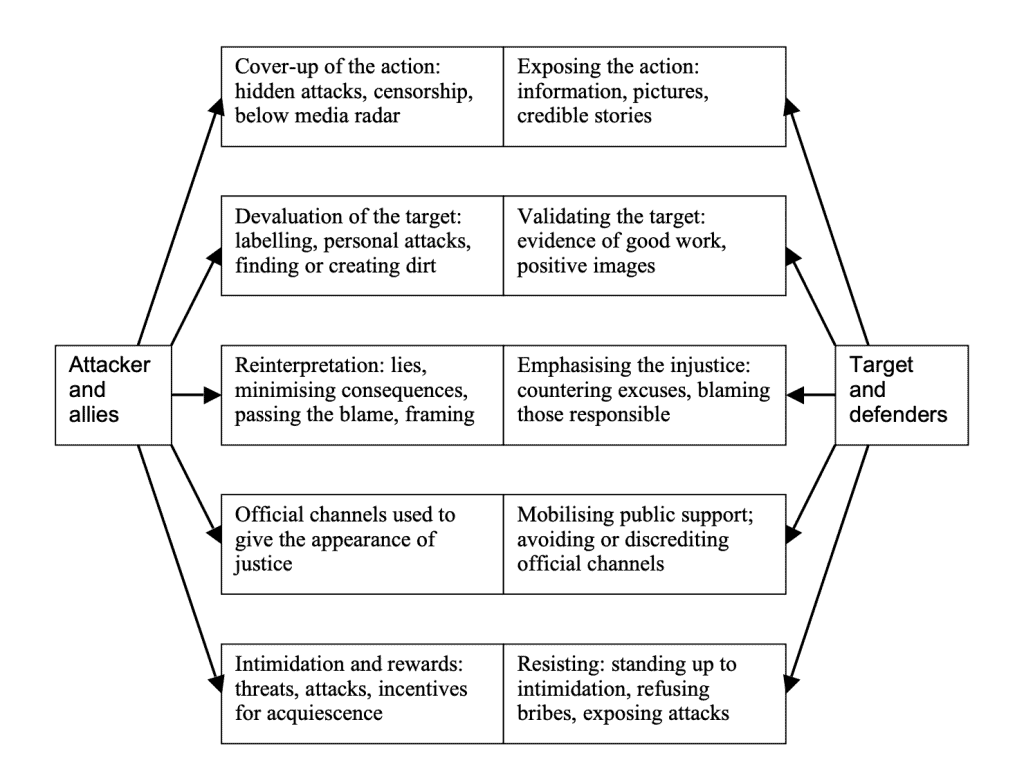 An additional consideration: the timing of communication is vital.

Three relevant factors that affect reception of a message are: 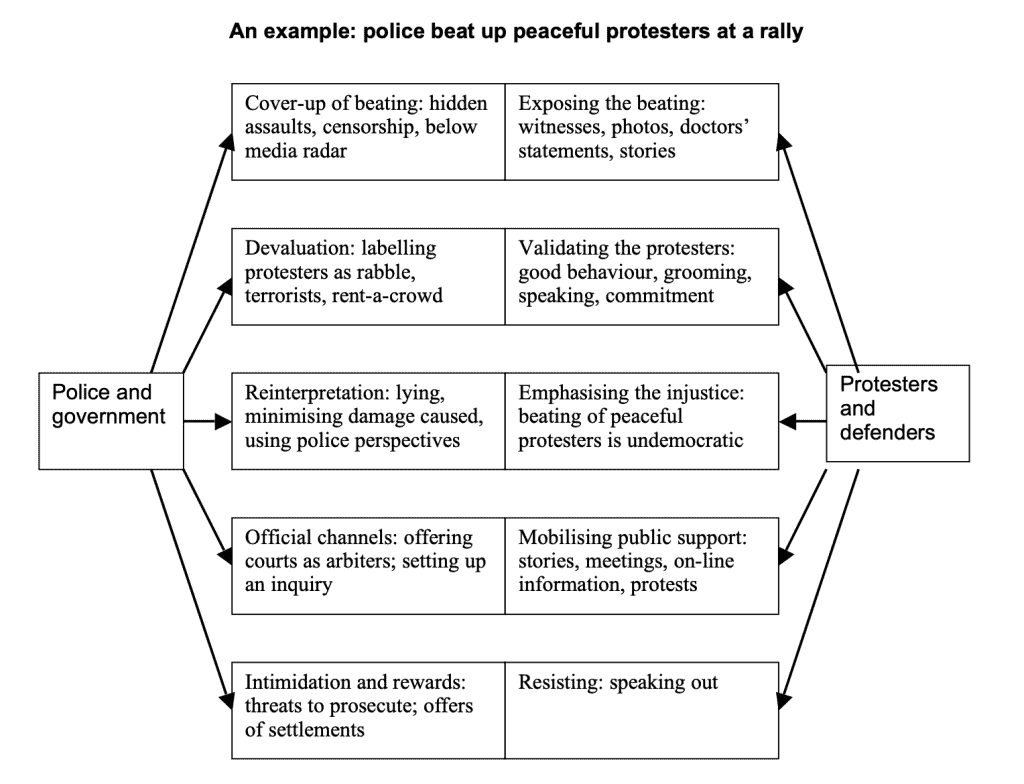 The five Rs of revealing, redeeming, reframing, redirecting and resisting can be used in reaction to an injustice or as a way of preventing it. For example, to help prevent police attacks, be prepared by having witnesses and cameras ready, dressing and behaving in an image-enhancing fashion, etc.

How the model can help

The book is also available in many other languages. See Brian Martin’s website for translations.

Here are more Backfire Materials from the author’s website.

Backfire workshop: Notes for a low-technology workshop for 2-20 people, by Brian Martin.

Backfire workshop: Notes for a workshop, plus handouts on promoting backfire and on Plan B, by Jason MacLeod.

“Tactics against injustice”: PowerPoint show (1MB) for giving a talk/workshop, by Brian Martin.

Brian Martin. Theory for activists. Social Anarchism, No. 44, 2010, pp. 22-41. Comments on developing theory using the example of the backfire model.

The Streisand effect (backfire from online censorship): http://en.wikipedia.org/wiki/Streisand_effect or http://www.thestreisandeffect.com/

Brian Martin. Debating vaccination: understanding the attack on the Australian Vaccination Network. Living Wisdom, Issue 8, February 2011, pp. 14-40. Also available in pdf. Part 3 includes an analysis of tactics used by the AVN’s opponents and how to counter them.

Susan Engel and Brian Martin. Union Carbide and James Hardie: lessons in politics and power. Global Society: Journal of Interdisciplinary International Relations, Vol. 20, No. 4, October 2006, pp. 475-490: the disasters of Bhopal and asbestos were potential backfires for the corporations held responsible.

Brian Martin. Tactics against scheming diseases. Journal of Sociotechnical Critique, vol. 1, no. 1, article 2, 2020, pp. 1-20. How disease can be thought of as an active agent, with case studies of AIDS, smoking and human evil.

Brian Martin. Euthanasia tactics: patterns of injustice and outrage. SpringerPlus, Vol. 2, No. 256, 6 June 2013. Struggles over euthanasia, from the Nazi T4 programme to denial of voluntary euthanasia.

Brian Martin. The Henson affair: conflicting injustices. Australian Review of Public Affairs, July 2008. Tactics used in relation to Bill Henson’s photographs of a naked girl are assessed as to whether they are characteristic of those used by perpetrators of injustice.

Truda Gray and Brian Martin. Backfires: white, black and grey. Journal of Information Warfare, Vol. 7, Issue 1, 2007, pp. 7-16: perpetrators can use black operations or ambiguous events as a pretext for action.

Brian Martin. Plagiarism struggles. Plagiary: Cross-Disciplinary Studies in Plagiarism, Fabrication, and Falsification, Vol. 3, 2008. Tactics used by (alleged) plagiarists and those trying to detect or expose them.

Brian Martin. How activists can challenge double standards. Interface: a journal for and about social movements, Vol. 7, No. 2, November 2015, pp. 201-213. Tactics for exposing and countering double standards by governments and other powerful groups.

Brian Martin. Flotilla tactics: how an Israeli attack backfired. Truthout, 27 July 2010. Tactics used in the Israeli attack on the Free Gaza flotilla, May 2010.

Brian Martin. From means to ends and back again. In Jørgen Johansen and John Y. Jones (eds.), Experiments with Peace: Celebrating Peace on Johan Galtung’s 80th Birthday (Cape Town, South Africa: Pambazuka Press, 2010), pp. 214-219. In social action, it can be useful to turn goals into methods and methods into goals.

Jørgen Johansen and Brian Martin. Sending the protest message. Gandhi Marg, Vol. 29, No. 4, January-March 2008, pp. 503-519. How protesters can connect with audiences, align their methods with their messages and deal with attacks.

David Hess and Brian Martin. Repression, backfire, and the theory of transformative events. Mobilization, Vol. 11, No. 1, June 2006, pp. 249-267: backfires can be transformative events for social movements, as show by the cases of the 1930 salt march, the 1991 Dili massacre and 1972 arrest of alternative cancer therapist John Richardson.

Greg Scott and Brian Martin. Tactics against sexual harassment: the role of backfire. Journal of International Women’s Studies, Vol. 7, No. 4, May 2006, pp. 111-125. The case of Anita Hill and Clarence Thomas is used to illustrate how to oppose sexual harassment.

Brian Martin. Opposing surveillance. In Katina Michael and M. G. Michael (eds), From dataveillance to überveillance and the realpolitik of the transparent society: the second workshop on the social implications of national security, University of Wollongong, Wollongong, 2007, pp. 71-82. Later published in IEEE Technology & Society Magazine, Vol. 29, No. 2, Summer 2010, pp. 26-32. Methods of resisting surveillance.

Aloysia Brooks. The annihilation of memory and silent suffering: inhibiting outrage at the injustice of torture in the War on Terror in Australia. PhD thesis, University of Wollongong, 2017.

Brendan Riddick. Political violence and the management of outrage: the convergence of media and political power to conceal human suffering in the “war on terror”. PhD thesis, University of Wollongong, 2013. The backfire and propaganda models applied to aspects of the war on terror, including Afghanistan, Fallujah, the Nisour Square Massacre, and drones.

Brendan Riddick. The bombing of Afghanistan: the convergence of media and political power to reduce outrage. Revista de Paz y Conflictos, No. 5, 2012, pp. 6-19.

Truda Gray and Brian Martin. The American war in Indochina: injustice and outrage. Revista de Paz y Conflictos, No. 1, 2008, pp. 6-28. How the US government tried to inhibit outrage from the bombing, the Phoenix Program and the My Lai massacre.

Brian Martin. How to attack a scientific theory and get away with it (usually): the attempt to destroy an origin-of-AIDS hypothesis. Science as Culture, Vol. 19, No. 2, June 2010, pp. 215-239. Tactics used in a scientific dispute to minimise outrage over perceptions of transgressing proper scientific behaviour.

Brian Martin. Energising dissent. D!ssent, No. 24, Spring 2007, pp. 62-64: methods of resisting suppression of dissent, with a focus on Australia.

Kylie Smith and Brian Martin. Tactics of labor struggles. Employee Responsibilities and Rights Journal, Vol. 19, No. 3, September 2007, pp. 193-206. How employers try to reduce outrage from anti-worker actions, with special attention to Patricks versus the Maritime Union of Australia.

Brian Martin. Boomerangs of academic freedom. Workplace: A Journal for Academic Labor, #12, 2005, pp. 64-79. A summary published as “The boomerang effect,” Campus Review, Vol. 15, No. 26, 6 July 2005, p. 5. The dismissal of biologist Ted Steele from the University of Wollongong is analysed in backfire terms.