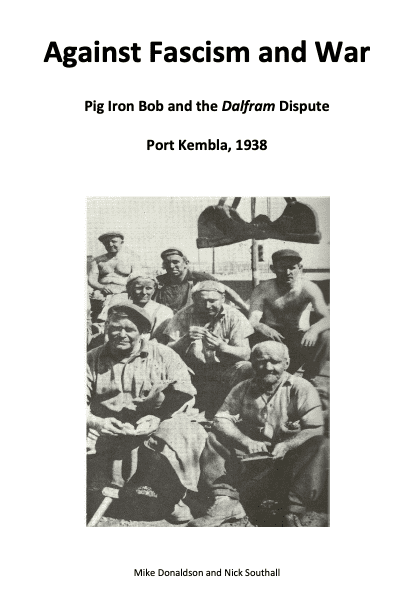 In solidarity with countries suffering under fascism and militarism, waterside workers and other unionists began placing industrial bans on war materials to overseas regimes including Japan, Germany and Spain during the 1930s.

Following the declaration of a national ban by the Australian Council of Trade Unions (ACTU) on such supplies to Japan the first major flashpoint came in November 1938 when wharfies and seamen downed tools to prevent the loading of pig iron onto the SS Dalfram. This initiated a ten week strike during which the conservative federal government and employers used arrests, covert operations, legal threats and other forms of pressure to challenge the boycott. Their campaign was led by future Prime Minister, then Attorney-General and Minister for Industry, Robert Menzies, who earnt himself the sobriquet of “Pig Iron Bob” in the process. Following mass sackings by major Wollongong employer BHP and a consequent collapse in strike funds the specific ban was lifted but in the wake of it the government quietly and unofficially agreed to end pig iron exports.

Against Fascism and War: Pig Iron Bob and the Dalfram Dispute, Port Kembla 1938 was originally published as a booklet by the Wollongong Free University on the 75th anniversary of the dispute. It provides a through account of the events and explores how militancy regarding international affairs was closely tied to workplace campaigns and education carried out by the Waterside Workers Federation. The full publication can be downloaded at the bottom of this page and an extract concerning community support for union action, including a huge protest against Menzies, appears below. A cartoon from the time depicts how various groups of workers combined to prevent pig iron from being sent to Japan.

When, immediately after the walk-out, [Waterside Workers Federation branch secretary] Ted Roach explained to the Illawarra Trades and  Labour Council, that his members were refusing to load pig-iron because “success to the Japanese Fascist militarists in China will, according to their own statements, inspire them to further attacks on peaceful people which will include Australia”, he immediately received its whole-hearted support.

Very soon, stopping any attempt to shift it to another berth or to Sydney for loading, the Federated Ironworkers Association, the Shunters’ Union, the Federated Engine Drivers and Firemen’s Association, the Australian Workers’ Union and the Railways Union all pledged not to handle pig-iron. Peace groups, women’s organisations, many clergy and the Illawarra District Assembly of the ALP were backing them up, broadcasting their support on the local radio station. On November 30, the Labour Council threatened a stoppage throughout Illawarra.

Day to day organisation of the dispute was taken up by the Labour Council’s disputes committee which immediately set about reinforcing the 24-hour 7-day picket on the Dalfram to ensure that no one got on the ship or near its berth. The disputes committee quickly opened negotiations with the stevedoring companies to restart work on the three ships that were now lying idle because of the lock-out.

Within a week of the imposition of licensing, the Labour Council committee had re-established the area committees established to fight unemployment in the early 1930s, and developed during the miners’ six-week national strike for shorter hours in 1937. Set up in many villages and towns along the South Coast, these brought people from different unions and non-unionists together to collect and distribute funds and food, and organise support and publicity.

Thanks to Roy Burns, Jackie Andersen, Stan Speechley and other Aboriginal men working on the waterfront, support from the Port Kembla Aboriginal community was rock solid. Elsie Sparks walked into the WWF office to volunteer and was soon hard at work sorting out and replying to the deluge of correspondence from all over Australia and world.

Garages donated petrol for trucks and cars organising relief. They travelled to Gosford for cheap oranges, to Robertson for potatoes, Moss Vale for meat and vegetables. Half a dozen relief workers went round the South Coast stores and bakeries each day, contacting hundreds of small businesses. Greek fish-shop proprietors were among the most generous. One gave 20 pounds, about one month’s pay.

Hotels, wine bars, newsagents, butchers, tailors, hairdressers, electricians, bakers, chemists, hotels, milk bars, shops dealing in babies’ wear, clothing, shoes, cakes and fruit all chipped in. Local businesses sponsored nightly broadcasts over radio station 2WL to support the waterside workers. According to Bert Smith, only two business people refused donations in the entire Wollongong and Port Kembla area. “A baker named Ernie Taylor ordered the unionists off his premises and threatened to call the police. He said wharfies were bludgers. His refusal of support cost him a quarter of his customers”.

Sam Domoney remembers that “the response everywhere was good. We had dance nights, with orchestras giving their services free of charge. Strikers and those locked-out were admitted free – they had little money. Picture theatre proprietors admitted wharfies’ kids free on one night a week”.

Parties of up to thirty went rabbiting and fishing. Relief workers often went into pubs, and asked words to the drinkers. Many donated generously. Collection boxes were rattled at Dapto, Kembla Grange and Bulli race tracks, and at other sporting events. Speakers went far and wide to raise money, to the Riverina, to Newcastle and the northern coalfields, and over the Blue Mountains to the west.

Betty Rowland, a well-known Australian playwright, rapidly produced a play called ‘War on the Waterfront’. A squad of police arrived and shut down its premiere performance before an audience of 2,000 in the Sydney Domain. When the actors from New Theatre tried again before an even bigger crowd, five were arrested, charged with breaching the Censorship Act and fined. In Wollongong, a drama group formed of supporters opened the play in Stuart Park and then took it to factory gates, pit tops, shopping centres, brickworks, beaches and country towns. 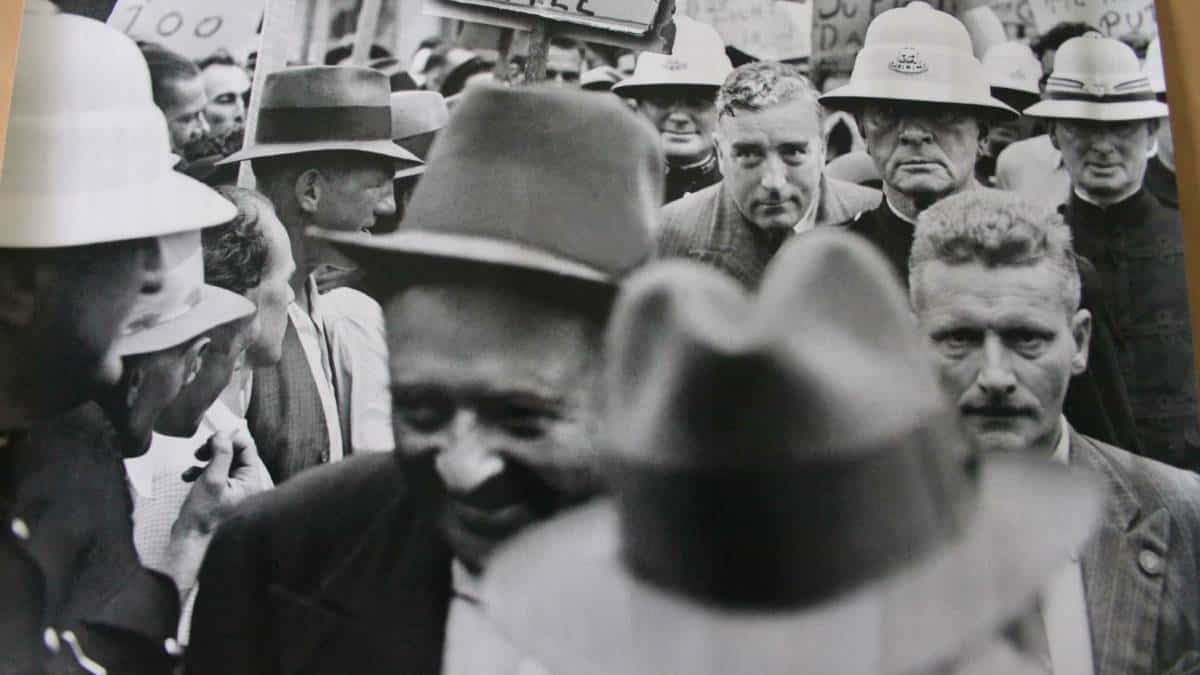 Future Australian Prime Minister Menzies being escorted through anti-war and pro-union demonstrators in Wollongong on 11 January 1938.

After the Christmas period, Bob Menzies made an attempt to settle the dispute by calling a meeting on 11 January with the Labour Council committee in Wollongong.  During his visit to Europe some months previously, he had lined up clearly and publicly with people like British Prime Minister Neville Chamberlain who gave in to Hitler’s and Mussolini’s demands. Menzies expressed sympathy for Germany’s territorial ambitions, even saying that Germany had a “case against Czechoslovakia” and said there were “credit entries in the Nazi ledger”.

The Labour Council committee mobilised Illawarra for Menzies’ arrival. The miners had a holiday, and so did their wives and kids. Not many Aboriginal men had a powerful motor bike but Stan Speechley did, thanks to the WWF’s colour-blind roster. He waited on the escarpment and as soon as Menzies came into view, he gunned it down through the bends along the coast road, alerting demonstrators in the miners’ villages. They quickly lined rather more than the sides of the narrow road, impeding the ministerial cavalcade following after him.

When Menzies eventually arrived in Wollongong, he was met by an angry demonstration of over 1000 people at the Town Hall. He snuck through the rear entrance into the Wollongong Hotel, opposite the Town Hall. The demonstrators’ placards outside the hotel demanded ‘Work and Peace’, ‘Homes not War’, ‘No pig iron for Japan’, ‘No Dog Collar’. Even the wharfies’ dog, Mong, had a placard.

It was here that Gwen Croft, a member of the Women’s Relief Committee, first called Menzies ‘Pig Iron Bob’ a name that stuck to him even after he had ceased to be Australia’s longest-serving Prime Minister.

Today it gets 1.4 million hits on Google. It was picked up by the Rev. Bill Hobbin, Bulli’s Methodist minister, prominent in the Austinmer-Corrimal Minister’s Fraternal, and popularised by Stan Moran, the well-known wharfie and communist orator in the Sydney Domain.

After Menzies finished lunch with the Mayor and other local dignitaries, he had to cross the road to the Town Hall to meet with the Labour Council committee. Concerned about his safety, Police Inspector Roser called Roach by loud hailer to the hotel entrance and asked him to guarantee Menzies’ safe passage. Roach organised half a dozen wharfies, Communist Party members to encircle Menzies while he cleared a path through the hooting, jeering crowd. Roach recalled the incident, ‘The irony of this! Menzies, that number one Red-baiter, had to be protected by communists!’. The South Coast Times reported next day, “Mr Menzies will not readily forget his visit to Wollongong on Wednesday afternoon. It was certainly the most hostile demonstration in the history of the town”.

At the Town Hall meeting, Menzies restated the government’s position that the Dalfram should be loaded and that no part of the community would determine the country’s foreign policy. He also hinted that if the ban were lifted, the government would review its policy on the export of pig-iron and consider withdrawing the [anti-union] licensing system in Port Kembla. At the conclusion of the meeting, his reluctant red escort delivered him back to the hotel through the belligerent crowd.